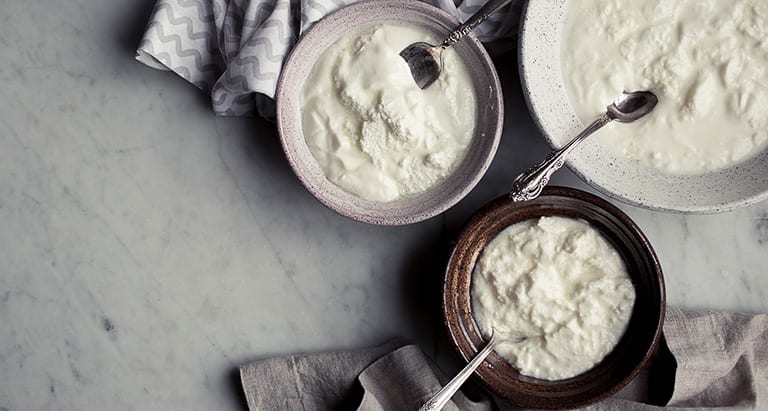 Everything You Want to Know about Yogurt

From fat-free and flavored to kefir, here’s how to buy, store and cook with this healthy, versatile favorite from the dairy case.
By Mark Scarbrough and Bruce Weinstein

At the supermarket, we all know where the yogurt is, but do we know what it is? It’s supposed to be good for us, but what’s the best way to get all that nutrition into our diets?

Briefly put, yogurt is a fermented milk product that most likely originated in Asia — although the first written records put it in Turkey around 1070 A.D. Today, it is made from any milk: cow, goat, sheep, yak, mare, water buffalo or camel, to name the most popular worldwide.

What to look for when buying yogurt


Look for yogurts with active, live cultures — in other words, “good” or “friendly” bacterial colonies that haven’t been killed off by pasteurization. These beneficial cultures are sometimes called “probiotics.” They may aid human digestion, help our immune systems and can be used for stomach problems like diarrhea, but more research is needed in this area. Avoid yogurts with added starches, gelatins or tapioca. Yogurt should be naturally thickened from the fermentation process.


How is yogurt was made


Almost all modern yogurt is made with a bacteria starter from another yogurt batch. Like sourdough, it’s a process that has roots far in the past as starters keep getting cultivated from batch to batch. The bacteria eat the naturally-occurring sugar — that is, the lactose. They then produce lactic acid which clots the milk protein to give yogurt its creamy texture. Yogurt’s ensuing acidity keeps bad bacteria at bay. Yogurt can often be kept for up to two months, sealed, in a cold refrigerator.


There are two important bacteria used to make yogurt: streptococcus thermophilus and lactobacillus bulgaricus. In the U.S., yogurt must contain both to be called “yogurt.”

Other bacteria are often added for better taste, texture or health. These include lactobacillus acidophilus and bifidus (which promotes digestive health) and lactobacillus casei (which can enhance the immune system).


What is Greek yogurt?


Basically, it’s strained yogurt, much thicker than most other varieties and usually made from sheep’s milk. The yogurt has been passed through a cheesecloth, linen cloth or other fabric, removing much of the liquid — that is, the whey. To make your own: line a colander with cheesecloth or paper towels. Add the yogurt, then set it over a bowl in the sink for a couple hours. Discard the liquid in the bowl; the resulting yogurt will be higher in protein and lower in lactose.


Yes — but only if the label specifically says that the frozen yogurt contains active bacterial cultures. Heat kills the bacteria — and some frozen yogurts are made by heating the mixture before freezing it, thus killing off the good stuff in yogurt.


Baking is the easiest way to use yogurt. Substitute plain yogurt for half the liquid (like milk or juice) in recipes for cakes, waffles, pancakes or muffins. In general, yogurt works best in cakey baked goods; it requires more complex chemistry if substituted in cookies and crusts.

Yogurt is a fine substitute for sour cream on baked potatoes, in creamy soups, salad dressings and as the base for dips.

Or use yogurt instead of cream or coconut milk to enrich a sauce, soup or stew. It may make the sauce more tart than intended, so seasonings may need to be adjusted.

One warning: Yogurt will “break” over the heat (that is, break down into a watery liquid and thick threads). To avoid this, make sure the yogurt is at room temperature, do not let it boil over the heat, and stir 1 teaspoon cornstarch into it before using. Goat and sheep yogurt tend to be the most stable in cooking.


Fat-free: Means it’s made from fat-free milk. It is, however, not strictly fat-free. The USDA allows manufacturers to label any product with less that 0.5 percent milk fat as “fat-free.” Read the label to know what you’re getting.

Low-fat: Usually made from 0.5 or 2 percent milk. It’s sometimes labeled “lite” or “light.”

Whole-milk: Made from whole milk with at least 3.25 percent milk fat.

Flavored: Yogurt to which any number of flavorings have been added, from strawberry to maple. In 1933, fruit jam was added to yogurt to preserve its shelflife — and first sold by Dannon in the U.S. In general, to keep the fruit tasting bright, flavored yogurts have a high sugar content. To avoid this, look for sugarfree flavored yogurts.

Kefir: One of many yogurt drinks, this one’s made with yogurt and yeast, often mixed with fruits or fruit juices.

Swiss yogurt, German yogurt or Rahmjogurt: Made from part cream and thus with a much higher fat content, up to 10 percent. (“Rahm” is German for cream.)

Soy: Made with soy milk and the same cultures used in other yogurts.

Skyr: Fat-free yogurt from Iceland that’s made with the two traditional bacteria as well as rennet, a familiar enzyme from cheese-making. The result is a very thick, creamy, fat-free yogurt.

Beyond the Yogurt Pot

From irresistible soups and dips, to a refreshing accompaniment to meaty kabobs, to a surprise ingredient in a classic dessert, yogurt adds a creamy tang to all kinds of dishes. Try our recipes and see for yourself.

Deviled Eggs with Capers and Dill

Cauliflower and Potato Mash with Gorgonzola

Roasted grapes with rosemary and yogurt