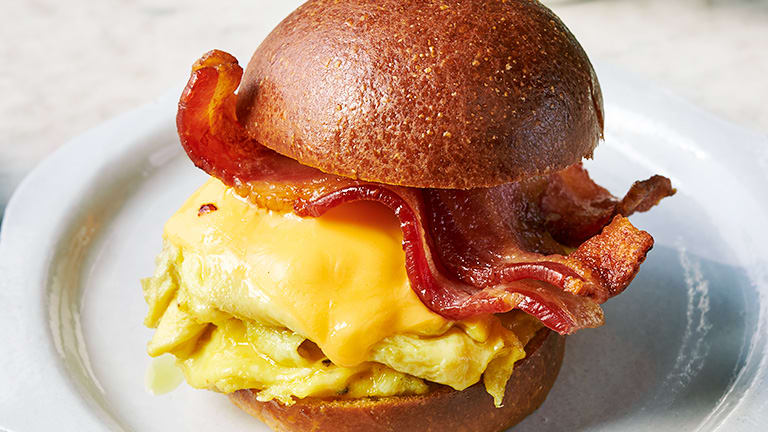 Add your favorite flavor to every meal with these PersonalPoints-friendly ideas.

Although it's high in salt and saturated fat, a little bit of bacon can go a long way in adding just the right smokiness to almost any dish—one reason why enthusiasts are using it in everything from cakes and ice cream to jam and sushi.

To follow suit without racking up too many PersonalPoints™, chop a few crisp slices to scatter the bacon flavor throughout a recipe. Look for different varieties since the PersonalPoints value can can vary between regular bacon, center-cut bacon, turkey bacon, Canadian bacon, veggie bacon, and more.

Here are some key terms that will help you the next time you are shopping for bacon:
Cured
The meat has been treated with salt to preserve it and enhance its texture, making it firmer. Other preservatives may or may not have been added.

Uncured
You’d think it means that there’s been no salt treatment on the pork — but actually not so. The USDA allows U.S. producers to label bacon “uncured” if certain chemicals are missing in the still-salty cure.

Smoked
The meat has been hung in an environment where it’s exposed to large quantities of smoke for varying amounts of time. The type of wood used to create the smoke will affect the flavor of the bacon: applewood, hickory, mesquite, pecan, etc.

Unsmoked
This cured pork product has not been subjected to smoke but may or may not be fully cooked.

Center-cut
In general, it’s a term to indicate slightly leaner belly bacon. The ends have been trimmed, resulting in slightly shorter slices with less fat.

Reduced-fat
This is another term for center-cut belly bacon. It’s much lighter on SmartPoints.

Double-smoked
Extra smoke has been added for a deeper taste.

Nitrates
The basic cure along with the salt. They keep the meat pink, even when cooked — like Canadian-style bacon and many kinds of strip bacon. They’ve been added to meat for centuries to preserve them by forestalling bacterial growth. However, nitrates quickly degrade into nitrites, which are known carcinogens.

Nitrate-free
No industrial nitrates have been added to the meat, but naturally occurring nitrates may well have been used to cure it. The most common is celery-juice powder, which does the same thing as the more aggressive chemicals but dissipates more quickly after curing.

Peppered
Belly bacon given a thick coating of cracked peppercorns.

Thick-sliced
Again belly bacon, this time cut into thicker slices. Thick-cut bacon is best for oven-roasting rather than pan-frying — or can be cubed into soups and stews for more flavor.

With its bold, savory punch, a little bacon makes everything taste better. Below, bacon makes a cameo with burgers, eggs, veggie sides, and even kale salad. We've got turkey bacon, Canadian bacon, regular center-cut bacon, and more. Dig in!

Brussels sprouts with bacon and shallots

Penne with asparagus and bacon

Kale with Bacon and Cannellini Beans

Egg and Canadian bacon sandwiches with avocado and tomato