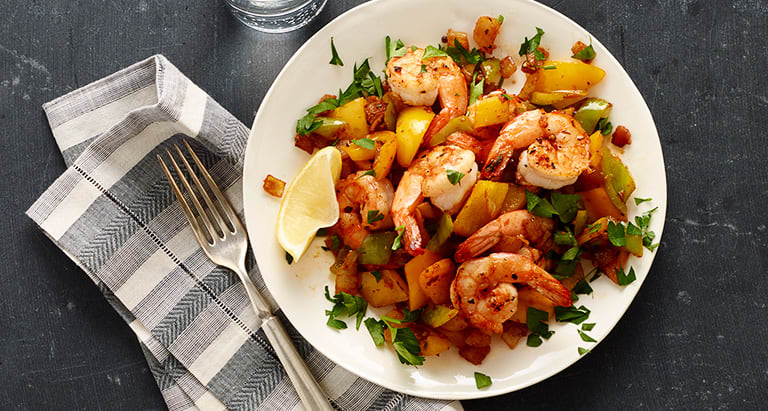 Getting into the Fat Tuesday spirit? Here's how to enjoy flavorful Louisiana cuisine while staying on Plan.
By Leslie Fink, MS, RD

Hoards of people flock to New Orleans to celebrate Mardi Gras. It's a festive time filled with music, parades, flying beads, and delicious cuisine. What can you expect to find on restaurant menus? Learn about traditional New Orlean's fare below. And if you're not headed to Louisiana to celebrate, cook up some WW Mardi Gras-inspired dishes from the comfort of your own home.

A cross between Southern and French cuisines, this "fiery" style of cooking originated with the French Canadians who settled in Louisiana in the 18th century. Though it relies heavily on animal fat for flavor and texture, its dishes can also be veggie-heavy, containing healthy portions of peppers, onion and sometimes celery.

Spanish, French and African cooking techniques are combined to yield this well-spiced cuisine. Although it is sometimes confused with Cajun cooking, Creole cooking is generally considered to be heavier on butter, cream and tomatoes.

These small, freshwater fish resemble — but aren't related to — lobsters. They're low in calories, but while they're healthy on their own, you have to watch out for deep-fried varieties. Opt for crawfish sautés, soups and stews.

This stewlike dish typically teams up chicken, pork or shellfish (or a combination thereof) with a wide variety of vegetables such as peppers, onions, okra and tomatoes. It's one of your better Mardi Gras choices from a nutritious standpoint.

In this dish, rice, tomatoes, green pepper and onion are mixed with poultry, meat, shellfish and sometimes sausage, then sautéed and simmered. The chicken or shrimp varieties are tasty lower-fat options.

This oval-shaped, sugary pastry is served up with a surprise: a small plastic doll baked inside. Tradition holds that whoever gets the piece with the doll is expected to host next year's party.

Piled high with ham, salami, cheese and olives, this New Orleans' hero packs quite a flavor punch. They're usually quite large - great for sharing.