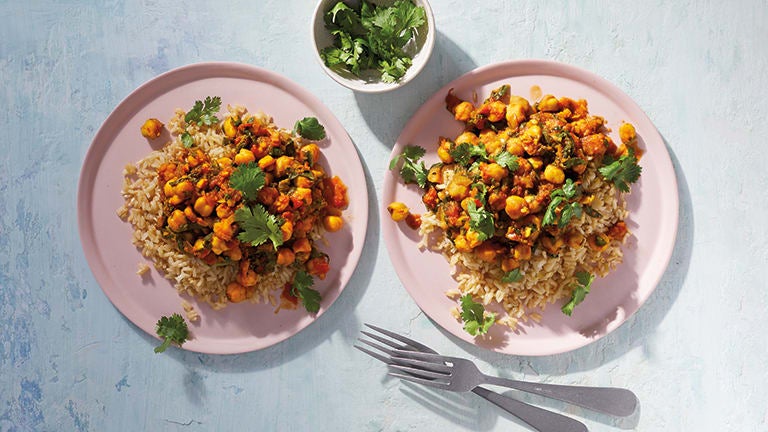 These inexpensive ingredients are quick to whip up into delicious dinners.
By Kate Heddings

You can’t walk half an aisle in the supermarket these days without coming across something advertising itself as the next great meatless protein. But one of the best and most versatile sources of plant-based protein isn’t something that was invented yesterday—it’s beans! (Bonus: these nutritional powerhouses are packed with filling fiber, too.) They’re perfect in soups, stews, burgers, bowls, salads, and way more. You can even whisk canned, fat-free refried beans into brothy soups to thicken them up. Plus, beans won’t put a big dent in your PersonalPoints™ Budget, even if they’re not one of your ZeroPoint™ foods.

The versatility of beans makes them a dream to include with flavors from all over the globe. In these recipes, they play the lead role in a Tex-Mex burrito bowl, a comforting Indian-inspired chickpea stew, as well as in kimchi soba noodles with shrimp and edamame. Another speedy win? With some store-bought naan, shredded mozzarella, and a can of beans, you can make super tasty pizzas in less time than it takes to get delivery!

Now these are some cool beans indeed.

Beans For the Win

Kimchi soba with shrimp and edamame