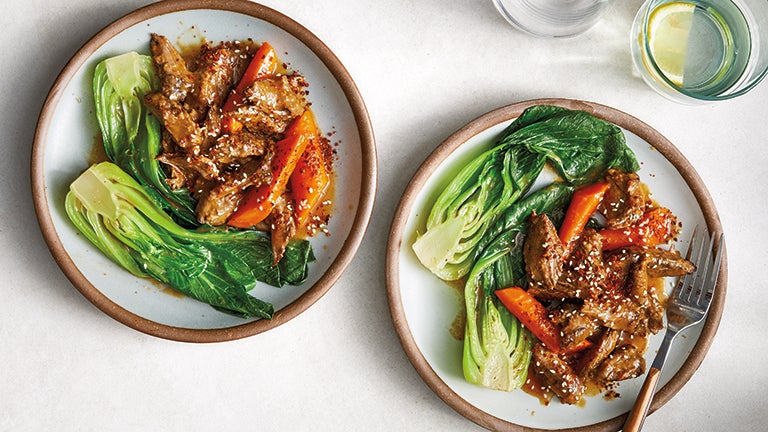 For when you want a hearty dinner but don't have all day to cook.
By Sherry Rujikarn

While the slow cooker remains one of the all-time most popular appliances for getting dinner on the table, the Instant Pot® has exploded in popularity over the past 10 years as a complementary weeknight-cooking gadget. Similar to the slow cooker, the IP (or any other brand of multicooker or electric pressure cooker) offers hands-off cooking that can be done without your presence in the kitchen. But unlike the slow cooker, Instant Pots cook ingredients under pressure, which raises the boiling point of the food, making it possible to cook hotter and faster than typical methods. And who doesn't want a dinner that cooks itself?

That's how a sweet and tangy Korean-style beef stew can come together in less than an hour instead of the usual 1 1/2 to 2 hours that the traditional way might take. Chicken drumsticks take just 12 minutes of cooking in a luscious Mexican mole-inspired sauce instead of stewing for two or three times as long.

Check out some of our favorite recipes, and get some tips for maximizing your Instant Pot cooking below.

Tips for Using Your Instant Pot

Big Batch Slow Cooked Chicken + 7 Ways to Use It