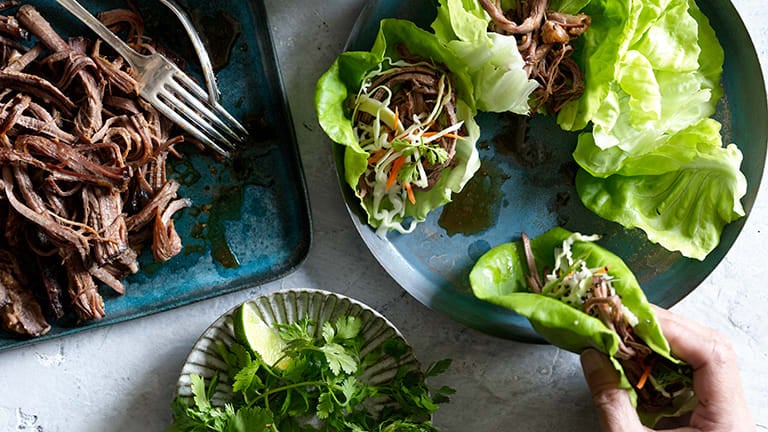 Where to Start if You're New to Korean Cooking

Although Korean ingredients are relatively new to most grocery-store shelves, this spicy-salty-sweet cuisine, also known as Han Shik, draws on flavors like garlic and ginger—but that's far from all.

The following ingredients are staples in Korean cooking, which also often includes the following:

Rice and noodles: As in other Asian countries, every Korean meal includes either short-grain rice or noodles. In fact, rice is so ubiquitous that bap, the Korean word for “cooked rice,” also means “food” or “meal.” Rice stars in two of the country’s most famous dishes: bibimbap, a rice bowl topped with vegetables, meat and a sunny-side-up egg, and jook, a porridge eaten at breakfast. When a meal doesn’t feature rice, it’s sure to have noodles — usually served in broth, either hot or cold. But perhaps the most famous Korean noodle dish is stir-fried japchae, slippery, chewy glass noodles made from sweet potato starch, cooked with vegetables and beef.

Fish and seafood: Korea is a mountainous peninsula where many people live near the coast, so it’s no surprise that aquatic creatures figure prominently in the cuisine. Koreans eat fish and seafood in every way imaginable: raw, dried, salted, broiled, grilled, steamed, braised, fried. Fish is often served whole, with no waste — the bones might be used for a quick soup to finish the meal.

Beef: In Korea, red meat is beloved but costly, so it’s usually served in small portions with noodles or rice and abundant vegetable banchan. Two cuts in particular are most popular: Galbi, short ribs that are grilled and eaten wrapped in lettuce leaves with ssamjang, a mildly spicy dipping sauce, and bulgogi, paper-thin slices of ribeye that are either stir-fried or grilled. Both use a similar marinade featuring soy sauce, sugar, sesame oil, and garlic.

Tofu: Although it originated in China, tofu (dubu in Korean) has been a substantial element of Korean cuisine for more than 1000 years. Soft or silken tofu is often simmered in soups and stews, while firm tofu is used for frying. One popular dish is dubujolim, tofu simmered in a soy-based mixture until it absorbs most of the flavored liquid. To keep tofu fresh for several weeks store it in water, in the fridge, and change the water every day.

Sesame oil: Korean sesame oil comes from seeds that are toasted before pressing, yielding an oil that’s darker and richer-tasting than other varieties — but if you can’t find a Korean brand, you’ll be fine with another Asian sesame oil. It burns at a lower temperature than most cooking oils, so save it to flavor marinades and stir-fries. Once opened, keep sesame oil in the fridge.

Soy sauce: Traditional Korean cooking involves two main types of soy sauce: Gook ganjang, which is used mainly for soups, is made from nothing but fermented soybeans and salt. Jin ganjang, used for everything else, is a more complex, darker, sweeter brew that also includes wheat and other ingredients. If you can’t find it, substitute Japanese soy sauce.

Gochujang and gochujaru: An absolute staple of Korean cuisine, as omnipresent as ketchup is here, gochujang is fermented chili paste made with soybeans, sweet rice powder and salt. Unfortunately there is no exact substitute, but it’s available in Asian markets. Gochujaru, an ingredient in gochujang, is ground chili powder. It’s fruitier and sweeter than most American varieties — if you can’t find it, substitute red pepper flakes, but use less than the amount specified.

Dwenjang: Another staple of the Korean kitchen, dwenjang is fermented soybean paste. Japanese miso is an adequate substitute, though dwenjang is chunkier and stronger-tasting. Combined, gochujang and dwenjang are the main ingredients in a third condiment, ssamjang, used to season ssam: lettuce-wrapped grilled meats.

Rice wine: There are several types of Korean rice wine but only cheongju, a filtered variety similar to Japanese sake, is generally used for cooking. If you don’t have either, substitute dry sherry or vermouth.

Garlic, green onions, and ginger: Koreans consume an astonishing amount of garlic — as much as 8 to 12 cloves per person daily. Together with green onions and ginger, it appears at nearly every meal, in kimchi and in countless other dishes.

Sesame seeds: Three types of sesame seeds are typically found in Korean markets: raw, toasted, and crushed (which is sometimes labeled “sesame salt,” though it’s salt-free). Buy raw seeds and store in the fridge or freezer, then toast and/or crush as needed. Toasted sesame seeds can be cooked into recipes or sprinkled on top of finished dishes for a nutty crunch.

Of course there's more to Korean cooking than ingredients! Here are some ways Korean dishes come together:

Pickling: Kimchi, aggressively seasoned vegetables pickled in heavily salted water, is the national dish of Korea — served as banchan or used as an ingredient in pancakes, fried rice and other recipes. Traditionally, kimchi was prepared to preserve the harvest, buried in clay pots through the winter months and transferred to streams or wells once the weather turned warm. Today, though, it’s generally just refrigerated — some Korean homes even have a separate fridge dedicated to it.

Stewing: Because beverages are not traditionally served with meals in Korea, there is always some form of soup — even at breakfast, in the form of jook or broth. Hot pots, a communal main course often set over a small heat source at the table, are saltier and thicker than soup, and can be quite spicy. Jolim, a soy-simmered stew, can feature anything from beef to potatoes to tofu.

Grilling: If kimchi is the national dish of Korea, grilling is the national pastime. It’s also the cooking style you’ll find in most Korean restaurants here at home. Meat or seafood gets marinated, then cooked quickly over coals — sometimes for use in ssam, wraps made with lettuce leaves.

Pan-frying: Jun is the Korean word for “pancake,” and there are many varieties — but none call for maple syrup. Instead these flat cakes are savory, and might feature meat, seafood, or vegetables; the most popular use kimchi, scallions, or mung beans. Koreans also pan-fry tofu, meats, fish and vegetables, and stir-fry dishes like japchae.