*People following the WW program can expect to lose 1-2 pounds/week. Gracie lost weight on a prior program and is continuing on PersonalPoints™.

I wasn’t entirely surprised when my dad called me the September after I graduated college. Ever the athlete, he’d bought a gym, he told me. And he wanted me to manage it.

While I was excited to get my career on the road, the idea of stepping foot inside a gym gave me pause: I’d felt like the heaviest kid my age since I was 7, and college only made things worse. Although I’d played basketball throughout high school, I gave it up as an undergrad while simultaneously developing some not-so-healthy habits: I’d frequent all-you-can-eat dining halls and crash diet, which would cause my weight to yo-yo. After college, I’d begun to grab dinner at the drive-thru every night. The pounds just kept accumulating until I felt too badly about my body to join a gym, let alone run one.

I still took my dad up on the offer, working behind the scenes on the gym’s social media accounts and business matters rather than out in the weight room because I felt hypocritical marketing personal training sessions to members when I was so out-of-shape.

By the end of the summer of 2017, I began to notice a tightness in my back that progressed to a burning sensation that would shoot down my right leg throughout the day. That fall, I'd been sitting for a few hours when my right leg went numb. Concerned, I went to a doctor who diagnosed me with sciatica, a radiating pain caused by nerve compression in the lower back. When he put me on bedrest for 10 days, I thought, “I’m 24 years old; I can’t live like this.”

While my doctor didn’t say whether my weight had contributed to my condition, he did mention that weight loss wouldn’t hurt. I couldn’t help but agree: I’d become so self-conscious about my size that I’d ditched jeans and adopted a wardrobe made up exclusively of leggings. I’d even begun to avoid going out with friends. Over the next few months, I made a few changes on my own, like drinking more water and replacing meals with shakes. But because I wasn’t truly committed to adjusting my lifestyle, the scale didn’t budge.

In April 2018, when a gym member I hadn’t seen in a while walked in during my shift, I couldn’t help but notice that she’d lost weight. Moreover, she looked happier and more energetic. When I sidled over and asked what she’d been up to, she mentioned WW. Right away, I called my sister, a former WW member, who offered to join with me. Later that day, my mom jumped on board, and we all signed up that evening.

RELATED: Join, Invite a Friend, and Get a Free Month of WW

When I first downloaded the WW app, I was curious to see how many PersonalPoints I’d been eating in a typical day: They added up to 200! The realization left me worried about my first WW Studio visit: I was scared my weight would be announced aloud and that the Workshop would involve a sad circle of people.

I quickly learned that weigh-ins are totally private; after I stepped on the scale, the WW Guide quitely recorded my weight in my Success Story booklet and closed it—a good thing since I didn’t want to see the number. In the Workshop, the members were actually quite cheerful and excited to share the strategies were working for them. I was so grateful to be a part of it that I actually asked my WW Coach if I could go to multiple Workshops a week. She said that I could sit in on as many Workshops as I’d like! Some weeks, I do go to a few for some added motivation.

Before WW, I’d always thought that weight loss required extreme measures, like eating no more than 450 calories a day. Although I had a generous PersonalPoints Budget, I thought: “I’ll just eat less and speed things up.” My first week on the program, I ate bland oatmeal for breakfast, a salad for lunch, and a spicy chicken sandwich for dinner, ending each day with PersonalPoints to spare. While I expected to see a huge change in my weight right away, I couldn’t have been more bummed when I stepped on the scale. My sacrifices, I learned, had only led to a 2-pound weight loss. While it was better than nothing, I’d made less progress than I’d expected.

When I talked to my WW Coach, she suggested eating more. The WW program, she explained, is designed for you to eat all your PersonalPoints.

During my second week on the program I took her advice to heart. I discovered new recipes through Connect, WW’s members-only social network, snacked throughout the day, and implemented healthy ingredient swaps like using Greek yogurt instead of sour cream on my Mexican favorites like tacos and taco salads. From the WW members I met online and in Studio, to my mom and sister, I felt like I had support coming from every angle. And the second week, I lost more than the first! About a month later, I decided to look back at my starting weigh-in; seeing where I started didn’t hurt because I knew I would never go back to it.

What Gracie ate then vs. now

Three months after I joined WW, I decided to start working out with a personal trainer. I had lost 30 pounds* by that point, and hoped that building muscle tone would take care of the excess skin I was beginning to notice on my arms and midsection.

At first I performed slow movements on a BOSU ball, then progressed to practicing bodyweight exercises and core work twice a week. At that point, I was still feeling numbness in my right leg from time to time, but after two months on my fitness plan, my sciatica symptoms began to subside.

Now that I’ve been active for over a year, and have lost almost 90 more pounds*, my pain is all but gone save a single flare-up on a long flight.

Even better: Now that I know firsthand what personal training is like, I’ve become more comfortable talking to gym members about it and feel better equipped than ever to be the facility’s manager.

My progress has entirely changed the way I think about myself: I’m not so self-critical anymore, and have even swapped my usual leggings for jeans. Although I still have a ways to go, I’m free from back pain and feel way better than I felt crash dieting. Sure, I’m always working toward my goals, but choosing healthy habits every day has helped me live in the moment. Now, if someone says to me, “You look amazing,” I don’t respond, “I’m not at my goal yet.” I thank them for the compliment, and I smile. 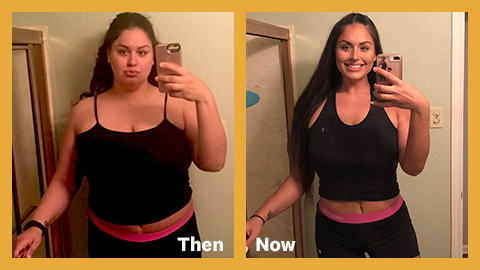 I know my family and friends are proud of me, but I’m even more proud of myself. I’m so much stronger than I ever thought I could be.