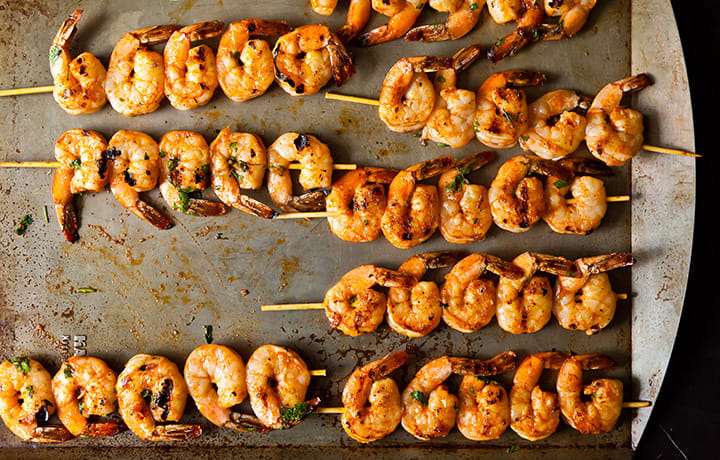 The Skinny on Shrimp

Make room in the fridge (or freezer!) for shrimp, the compact crustacean that boils, broils, grills or sautés in minutes.
By Juliet Glass
Many fish counters and markets sell raw, peeled and deveined shrimp as well as cooked, peeled and deveined shrimp, both good options if you are pressed for time. When buying shrimp, look for shrimp with firm, moist flesh and a clean, briny (oceany) smell. "Off" shrimp smells distinctly of ammonia. In the freezer aisle you may find low-priced bags of raw unpeeled, raw peeled and cooked peeled shrimp; these specimens run the risk of freezer burn, so stick to your supermarket fish counter or seafood market, if possible.


Shrimp is sold by the count, which is the number of head-off shrimp of similar size per pound. Larger shrimp fetch higher prices, but remember that sizes can be used interchangeably in most recipes, as long as you adjust cooking time. Here's a guide:

There are thousands of shrimp species, and the most common way to classify them is by color (of uncooked shrimp). The most readily available types are white, pink, brown, black and tiger, each with subtly different flavors.


Warm Water Upwards of 90% of all shrimp sold in the United States is warm water imported from Latin America and Southeast Asia; much of it farm raised. Almost all of it has been frozen at some point. Fish counters and markets selling unfrozen shrimp have simply thawed it for your convenience. If you live in a Gulf state, where most wild-caught domestic shrimp comes from, you might be able to buy it fresh (never frozen), but expect to pay a premium. Domestic farm-raised shrimp (some carrying an "organic" label) is a great, albeit pricy, option for anyone with environmental concerns about imported shrimp.

Cold Water Cold water shrimp is smaller and sweeter than the others—the most common types are Maine's pink shrimp and Alaska's spot prawns—but also hard to come by.

How to Prep Shrimp


How to Shell: Unless you plan on grilling or boiling your shrimp, remove the shells before cooking. Tear off the legs, and then, starting at the thick end, peel off the shell. To remove the tail shell, pinch it and pull away from the body.

How to Devein: Small and medium shrimp do not require deveining (removal of the intestinal vein), but many cooks do so for aesthetic reasons. The vein in large, extra-large, jumbo and colossal shrimp contains grit, so it should be removed. With a paring knife, cut the shrimp along the back to expose the vein and then remove it with the tip of a knife. Shrimp deveiners simplify the task a bit, but are by no means a must-have.

How to Clean:  All shrimp should be rinsed well in cold water before cooking.

How to Cook Shrimp


Unpeeled shrimp are excellent boiled in a shellfish boiling mix, and are also great for grilling, as the shells protect the tender flesh and keep it moist.

Peeled shrimp pick up flavors quickly, so non-fat marinades are a great way to boost flavor without adding tons of calories. For an Italian twist, marinate in white wine, lemon zest, chopped garlic, black pepper and chili flakes for 30 minutes. Or take shrimp in an Asian direction by marinating in fish sauce, chopped fresh lemongrass and chopped garlic. Drain marinated shrimp and sauté in a nonstick pan until pink.

Shrimp is done as soon as it loses its raw color. Shrimp cooks very quickly, going from moist and tender to dry and tough in under a minute, so be careful not to overcook. Pre-cooked shrimp will dry out if reheated and should be used only for cold dishes like salads, sandwiches and canapés.

Lemon-garlic shrimp with couscous and broccoli