Real Talk: I "Cheat" During Yoga

So what if I spend half the class resting in child’s pose?!
By Renée Bacher

Janene, our yoga instructor, moved around the studio as people trickled into class. I rolled my mat out on the floor and began chatting with my friend Wendy, sitting cross-legged beside me.  Tiny string lights glowed, candles flickered, and the air smelled faintly of lavender. I’d spent the day hunched over my computer and my neck was killing me. But that pain was about to melt away. “How’s everyone feeling today?” Janene asked. “Tired,” I piped up. I wanted to let her know, so she wouldn’t be surprised if I spent half the class resting in child’s pose, as I’ve been known to do. Or if I bowed out because my shoulders started burning while everyone else flowed effortlessly through their sun salutations like they’d chugged a four-shot venti latte before class.

There are many ways to practice yoga. My way may be unorthodox but its underlying principle is simple: If it feels good, I do it. If it hurts, I don’t.

So I won’t attempt certain poses, including headstand, shoulder stand, plow, and side crow. Revolving poses are negotiable, depending on how warmed-up my very long, very tight hamstrings feel. And downward dog for more than five seconds is not a resting pose for me. Who can rest when her shoulders are on fire from bearing the not-insubstantial weight of a 6 foot 3 body?

With all these stipulations, you’d be justified in concluding that I’m a reluctant yogi, or an indifferent one. You’d be 100 percent wrong. I adore yoga and credit it with transforming my mind and my body. Indeed, since embracing what I call my Yoga Slacker practice, I have held unlimited memberships at several yoga studios in my hometown, and bought temporary memberships when I’m away (where, if a teacher turns out to be a Yoga Brute, I fold up my mat and quietly leave). 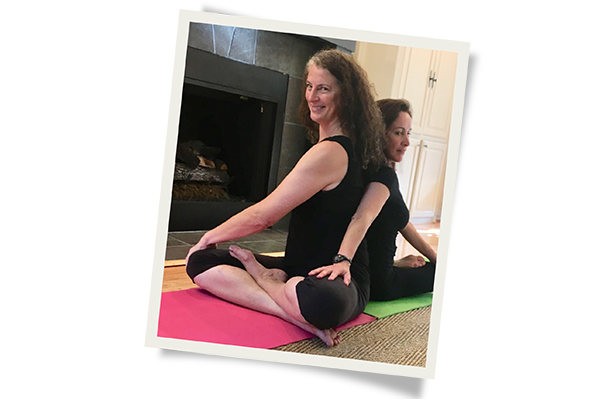 I have reaped a multitude of yoga’s scientifically substantiated benefits: less arthritic pain, more mobility, far less anxiety than I’m wired for genetically, and a general sense of calm. During my daughter’s senior year of high school, when I felt despondent about her imminent departure for college (and freaked out about how we were going to pay for it), I found myself at the end of every yoga class lying dreamily in corpse pose (exactly what it sounds like) watching my worries float away like puffy white clouds in a perfect blue sky. No sense in eating yourself alive over what you can’t control, right? I knew that truth in my head, but with yoga’s help it took root in my heart. And on those days when every joint hurts from my osteoarthritis and sedentary job, nothing is more soothing and rejuvenating than a nice warm flow class, customized to my signature style.

I did not, however, arrive easily at this place of enlightenment. (I wish.)

About 18 years ago, I went with a yoga teacher friend to a class that neither of us realized consisted solely of other yoga teachers. There I was, a rank amateur amid a sea of pros. The petite woman leading class was 30 years our senior with the lean, muscular body of a 12-year-old boy. As she barked out the poses, I could see that she was not pleased with my inability to keep up. In a flash, she was on me, twisting my body into postures it did not want to be in.

I was too timid to resist, embarrassed at how physically unfit I was compared with the flawless specimens around me. I didn’t utter a squeak of protest as this miniature Godzilla held me in the bone-crushing vise of her arms and bent my legs backward. She’s the expert, I told myself. When class ended, I limped outside, a ball of pain from head to toe—a state in which I remained for two full weeks. I vowed never to set foot in a yoga class again.

RELATED: What to Expect at your First Yoga Class

I kept that vow for more than a decade. Then, at 45, I had an abdominal surgery that left a seven-inch horizontal scar across my groin. I worried that if I didn’t rebuild my abs, already stretched out from three pregnancies, my lower back would graduate from achy to incapacitating. I’d heard that yoga was a gentle way to build abdominal strength that supports the lower back. Maybe it was time to give it another try.

One day, at my local YMCA, where I’d just finished a leisurely stroll on a treadmill, I peeked in the window of a yoga class that was wrapping up. The sounds of sitar music drifted out from under the door as the instructor wended her way among reclining bodies, whispering kind, reassuring words that I could just barely hear. “This is your breath, your yoga.” When class ended, I went up to her—it was Janene— and told her I wanted to enroll but had to take it easy because of my recent surgery. “Do whatever you can,” she said, “and don’t worry about the rest.”

Janene was as good as her word. She encourages everyone, but never compares us, even implicitly, or pressures us to do something that feels bad. I started with her beginners’ class and fell in love with the dim lights, relaxing music, and Janene’s gentle lower-back massages. These beginners’ classes were the perfect gateway drug for me, and I always recommend them to anyone who’s considering yoga but is unsure what she’s getting into. I soon advanced to the intermediate level because, believe it or not, I do like a challenge, as long as no pain is involved.

There’s a wonderful Sanskrit word, ahimsa, which roughly translates to, refrain from doing harm and exercise compassion and nonviolence toward all living beings.

Ahimsa is a key virtue in Buddhism, Hinduism, and Jainism. In one of our classes, Janene said ahimsa applied to us, too: We should never harm ourselves trying to be the most hard-core yogi in the room, or even a medium-core yogi struggling to keep up. For me, then, ahimsa means practicing only with teachers who respect the hard-earned wisdom I have about my own body. That way, because I keep enjoying yoga, I keep doing it.

I’ve been practicing like this for eight years now. But unfortunately we live in a hyper-competitive era in which we’re all expected to work out until we’re as buff as Navy SEALs and then post the proof on Instagram. So even in Janene’s class I occasionally feel subpar compared with more gung ho members. Some of that sense of inadequacy may be a projection of my own fears, but in one recent case, a classmate undeniably passed judgment. Out loud. She “joked” before class that I always “cheat” at yoga. Janene frowned, and Wendy did a double take, widening her eyes first at the jokester and then at me: Oh no she didn’t!

Meanwhile, I felt like I’d been punched. It was all I could do not to leap up and announce to the entire group that I have tendonitis in my left shoulder and arthritis in my lumbar spine, confirmed by MRIs and an X-ray. Instead, I stewed silently through the whole ruined class—and left with a crick in my neck.

At our next class, Wendy handed me a magnet that said, “I Totally Cheat at Yoga.” Clearly, I had calmed down and moved on (thank you, yoga) because I took one look and burst out laughing.

That magnet now lives on my fridge.