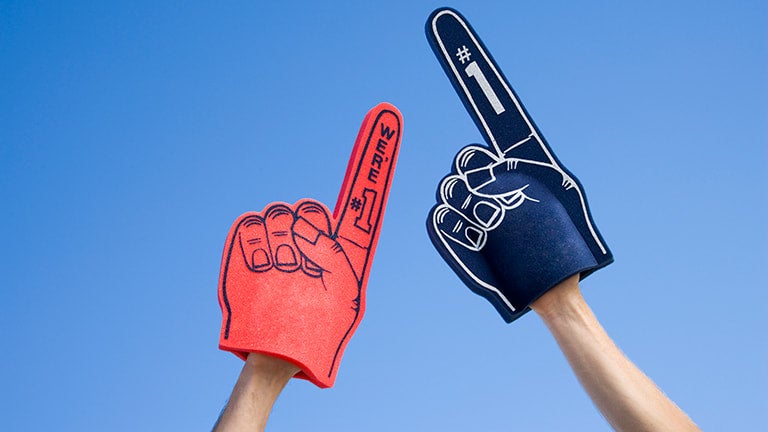 Can Watching Sports Make You Healthier?

Game on! Early evidence suggests that cheering for pro athletes could fire up your fitness motivation and positively affect your mood.
By Scott A. Rosenberg

The starting gun sounds. Runners explode from their crouched positions, legs pumping and driving around the track, racing toward the finish line. They’re neck and neck around the first turn; then the runner in lane 6 pulls around. As the group reaches the final straightaway, the racer in lane 4 gets an extra burst of energy and takes the lead, nabbing a surprise win.

Watching the race on TV at home, you leap off the couch and pump your fists at the exciting finish. You’re so inspired you almost feel like you could win a 400-meter sprint. Later on, you find yourself eyeing your sneakers for a possible neighborhood jog.

Turns out, that fired-up feeling we get from watching athletes vie for glory is a growing area of interest for researchers. A string of preliminary studies has found that some of us feel more motivated to exercise—or enjoy a measurable mental boost—after catching a great game or other sporting event. Could cheering from the sidelines make a positive difference in long-term health? Science suggests it may be possible.

One small 2019 survey tracked fans who attended a golf tournament and found that 40% of respondents amped up their physical activity after watching pros sink putts (they also received a leaflet on the perks of exercise). Surprisingly, the effect lasted for months. This was followed by a study concluding that adolescents and young adults who watched sports were more physically active than non-fans, a correlation that held whether subjects observed games in person or through a screen.

“A friend of mine watched the Boston Marathon 25 years ago and was so motivated she suggested we start running, which I had never done,” Olmsted explained. He’s since gone on to complete “multiple marathons, a couple of ultras, tons of half marathons, and four to six days a week of morning runs—all because my friend watched that race on TV,” he says.

And while this athletic effect hasn’t been documented across all age groups, there may be other reasons to score season tickets: A 2019 study of 584 older adults published in the Journal of Aging and Health concluded that sports spectating may buoy mood by cultivating a feeling of community.

“Our findings indicate that both attending a sports game and psychologically identifying with a team competing in the game enable older adults to feel that they are emotionally supported by the team’s other fans,” says study co-author Yuhei Inoue, PhD, a reader in sport management at Manchester Metropolitan University in the United Kingdom. “Moreover, because of this enhanced sense of emotional support, older adults are more likely to feel [a sense of belonging] and experience a positive state of wellbeing, as indicated by increased life satisfaction and reduced negative emotions.”

Dr. Inoue’s conclusions align with those of a small, randomized controlled trial also conducted in 2019, which assigned half of volunteers to attend baseball games and the other half to simply follow their normal daily routines. After two months (and 21 games), those in the spectator group reported significantly fewer symptoms of depression.

Just one caveat for superfans: If you’re rooting hard for the home team and, say, your third baseman racks up a loss by booting a grounder into left field to score the go-ahead run, science suggests you might feel, well, bummed. Fans who strongly identify with particular athletes or teams may notice their mood rise and fall with players’ triumphs and defeats, according to a small 2020 review published in Frontiers in Psychology.

Dr. Inoue himself says he experienced a boost in wellbeing from a solo sports outing about a decade ago, when he had first moved to the United States to pursue a graduate degree at Ohio State University and was feeling lonely for loved ones back in Japan.

“I attended the university’s American football game on campus by myself and was surrounded by over 100,000 spectators who uniformly supported the Ohio State Buckeyes,” Dr. Inoue recalls. “This shared experience led me to feel that I was a part of the university and broader community, which facilitated my adjustments to the new environment and alleviated the emotional struggles I faced at that time.”

Dr. Inoue adds that the type of sport or game doesn’t seem to matter. The science is largely about rooting for something. Tap that team spirit, and nourish your own.

Journalist Scott A. Rosenberg is a copy editor at WW. His writing has appeared in amNewYork, Entertainment Weekly, Newsday, New York Post, The Washington Post Express, and The Onion.

This article was reviewed for accuracy in July 2021 by WW Nutrition Manager Angela Goscilo, MS, RD, CDN. The WW Science Team is a dedicated group of experts who ensure all our solutions are rooted in the best possible research.