Adam: As Rocky Balboa famously said: “Everybody can change”

WW member Adam gives a blow-by-blow account of how he went from beginner to champion fighter and lost over 2st in the process.

"My WW Coach was incredibly supportive, and I found the atmosphere in my Workshop just as motivating as the boxing club." 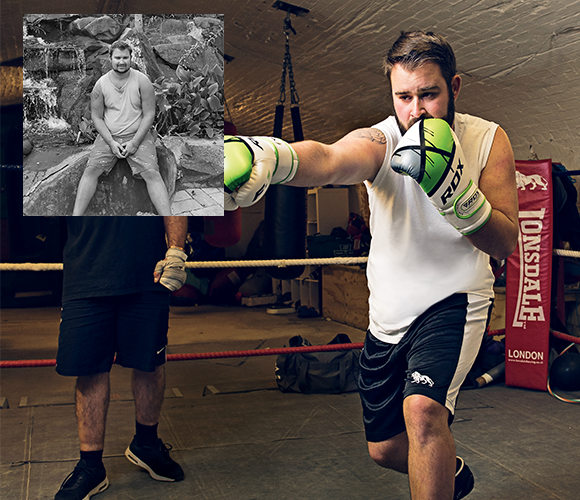 For me, going to the gym was a bit depressing. I signed up feeling determined to get in shape, but just a few months later, the novelty had worn off. In the time since my two-year-old son Hadley had been born, I’d become tired, out of breath and developed ‘man boobs’. And that wasn’t who I wanted to be.

Then, I spotted a poster for a free trial at a local boxing club. I’d always been a fan of the sport so I thought, ‘Why not?’ After all, as Rocky Balboa famously said: ‘Everybody can change.’

Walking into my first boxing class was daunting. I wasn’t sure what to do, but the instructor was great, and I found the punch bags were a fantastic outlet for both my mind and body! The thought of sparring with other people kept me feeling motivated, and I felt like I was part of something.

WW on my team

It was the same with WW. My WW Coach, Di, was incredibly supportive, and I found the atmosphere in my Workshop just as motivating as the boxing club. It helped me change my eating habits, too. I’d always enjoyed chicken, fish, fruit and veg, but my carb portions were out of control. When I started using the app and weighing my servings, I learned how to cut back.

A couple of months after I started boxing, I was invited to take part in a charity match. It was tougher than I’d ever imagined, but in the third round, I heard a massive cheer from my friends and family in the crowd. I thought, ‘How lucky am I to have all these people here to support me?’.

Now I’m training for my next big fight. And while I previously competed in the heavyweight division, my new goal is to get down to the cruiserweight category. To steal another line from Rocky, it’s about how hard you can get hit and keep moving forward. That’s what I plan to do, because that’s how winning is done!

Anahid: Exercise is a way to clear my mind

Danielle: I lost 2st and ran my first marathon