Plagued by hard times, she invested in her health—and hasn’t looked back.
Charlotte S., 31, lost 55 lbs* since joining WW in 2011.

*People following the WW program can expect to lose 1-2 pounds/week. Charlotte lost weight on a prior program and is continuing on PersonalPoints™.

When I was 23 years old, I didn’t have a stable living situation. While I worked part-time jobs here and there, money was so tight that I hopped from one friend’s couch to another’s. On most days, I ate cheap fast food even though I knew it wasn’t healthy. Eventually, I started wearing yoga pants daily because I felt so uncomfortable wearing anything with a button.

As my body grew less recognizable, it became hard for me to look at myself in the mirror. By the winter of 2011, I realized I had a choice: I could either continue to be miserable or start taking control of my life. I picked the latter and walked into my first WW Workshop that December.

Because I’d been successful on WW before, I was steadfast in my decision to join—even though I sometimes had to borrow a few dollars from a friend–and a few times, from my WW Coach—to cover my weekly fees. WW felt like the best investment I could make.

Since the only kitchen appliances I had in the room I was renting at the time were a microwave and small refrigerator, and I had to wash my dishes in the bathroom sink, I ate the healthiest fast-food options I could find, like side salads and grilled chicken items. Sometimes, I’d buy frozen entrées and calculate the PersonalPoints using the barcode scanner in the WW app.

During my first few months on the program, I was tied to the scale. If I didn’t lose weight one week, I’d get really disappointed. But once I started trusting the program, I was so much more successful. I stopped focusing on the number and more on the habits I was building.

The best part: I never felt deprived. For instance, because I love cheese, I’d figure out ways to incorporate it into my meals in a healthy way. I’d make healthy versions of my favorites foods like mac and cheese using butternut squash or Greek yogurt. Or, I’d save my PersonalPoints so I could snack on a few cheese cubes.

At the beginning of 2012, I landed a full-time job in a client support role at a call-tracking company. Having a routine, I realized, gave me just as much comfort as a regular paycheck. I felt secure for the first time in over a year—like the rug wasn’t going to get pulled out from under my feet.

Eventually, I saved enough to rent my own apartment—a place to call my own. Having kept up my newfound healthy lifestyle made me feel like all my hard work was paying off.

What Charlotte ate then vs. now

Dealing with the highs and the lows

For years, WW Workshops have been the one constant in my life, a place where I could always be myself and feel accepted—even when my life began to unravel in the summer of 2018 when my father was diagnosed with Stage 4 lung cancer. Although I stepped back from my job to be his full-time caregiver, he passed away eight months later.

I was worried that my pain would bring me back to a dark place. At first, I leaned on stuffing my face with fast food and ice cream to make things better and gained about 10 pounds back.

When I went back to my Workshop a few weeks after he passed, the members welcomed me with open arms and ears as I shared what I’d been through. I felt like I was a part of something that's bigger than myself.

The support helped me remember that WW had taught me a different way to eat and coping skills to process my emotions. The support I got from my Workshop equipped me to handle stress and setbacks and move forward. I was able to get right back on track.

RELATED: The importance of self-compassion

When a new program came along several months after my father passed away, I welcomed the change. I needed to recommit to my healthy lifestyle so I could honor my father and continue to take care of myself.

Over time, I've incorporated more and more ZeroPoint™ foods into my daily routine. I’m a big Mexican food fan, and I love that corn, chicken, and beans were on my ZeroPoint foods list. I'll sometimes add in eggs to make my favorite breakfast burrito.

I love that there’s variety and I have options when it comes to how I want to eat: Over the years, it’s what’s helped me maintain my 55-pound* weight loss. The program hasn’t just become a part of how I eat; it’s part of who I am.

My success on WW has spilled into other parts of my life: Since joining, I’ve earned my bachelor’s degree in organizational leadership, and landed a career in human resources. But more importantly, I’ve been able to build up my self-esteem. 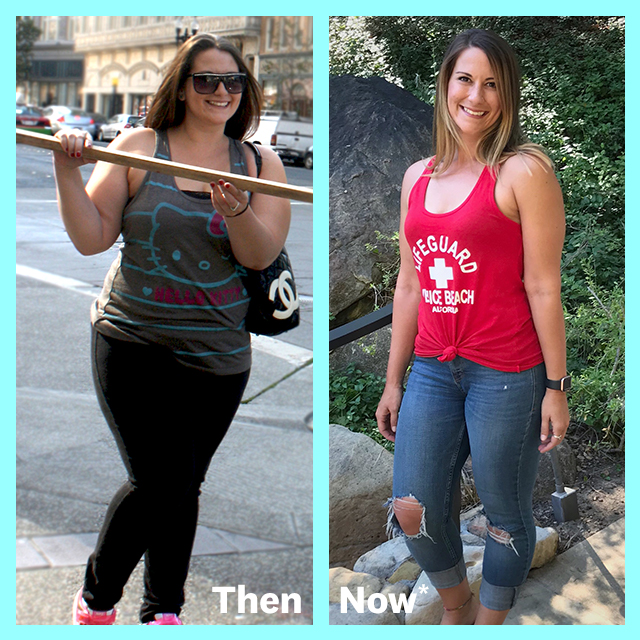 Now, I make a conscious effort to switch the negative talk to positive. I give myself credit for all that I've accomplished: I’ve moved into a place of my own, become more comfortable wearing jeans and form-fitting clothing, and finally love what I see when I look in the mirror.