*People following the WW program can expect to lose 1-2 pounds/week. Ann lost weight on a prior program and is continuing on PersonalPoints™.

WW and I go way back: After I reached my weight loss goal in the 90s, I began working as an editor for WW magazine and as a part-time WW Coach in Manhattan until 2004 when I retired and moved away from the city.

While I incorporated a few weekly walks into my new routine, I slipped into old habits of eating out without being mindful of what I was consuming. As a result, I began to gain some weight back. While I wasn’t angry at myself, I felt demoralized and resigned to my new figure.

In November 2016, one of my friends told me that she had lost some weight on WW. “Been there, done that,” I thought. “WW isn’t for me anymore.” But later that evening, I started questioning why: Foolishly, I thought my weight didn’t bother me anymore. But on the brink of turning 65 years old, I realized, I’d begun to feel uncomfortable in my own skin.

When I’d get dressed up to go out, I couldn’t fit into my favorite dresses; when I’d take out my road bike, my workout shorts felt tight. And worst of all? When I’d get on the floor to play with my grandkids, I struggled to get up. After all these years, I wondered, shouldn’t I be taking care of—and loving—myself?

A few months before my 65th birthday, I drove to a WW Studio and walked in feeling like a brand new member.

During my first week back on the program, I browsed through the WW app to get a sense of how my current eating patterns measured up to my PersonalPoints Budget. For years, my husband and I would enjoy a trifecta of protein, veggies, and a starch or two every night. But then I started to think: Do I really need the pasta and the bread? So a few days that first week, we skipped our starches and stuck with seafood like baked flounder or grilled shrimp and vegetables like caramelized broccoli—and we didn’t miss a thing!

What Ann ate then vs. now

When I returned to my WW Studio the following week, my clothes were already feeling a little looser. At my Wellness Check-in, the scale confirmed that I’d lost a few pounds*.

With my initial success and the support from the members in my Workshop, I was excited to continue. As per the laws of physics, “a body in motion tends to stay in motion”—and I definitely felt the momentum.

At my Workshop that day, I mentioned a snack that I wanted to try. The next week, my WW Coach surprised me with a sample. Her small act of kindness made me feel like I mattered. There was no way I was going to miss my next Workshop!

Tracking what I ate—something I’d always inspired my members to do when I was a WW Coach—became a new non-negotiable for me. I also pre-prepped my meals more often and stopped eating out as much. On the program, I felt a sense of relief, control, and confidence.

When I joined WW, I bought a spin bike to take virtual classes. Investing in an expensive piece of exercise equipment was out of the ordinary for me. While I might not have splurged on myself a few years ago, I began to see things differently: My wellness has become my priority.

Now, no matter the weather or the season, I can access my spin classes from home. And I still get active outside when I can.

While my weight used to hold me back, once I began to lose it, I realized I could kneel on the floor with my grandchildren and take longer bike rides. I could go ice skating and travel. I’ve developed this sense of freedom that I hadn’t felt in a long, long time.

I joined WW to fit into one of my favorite dresses, look in the mirror, and smile at what I saw.  But now, I’ve also become the healthiest I can be. 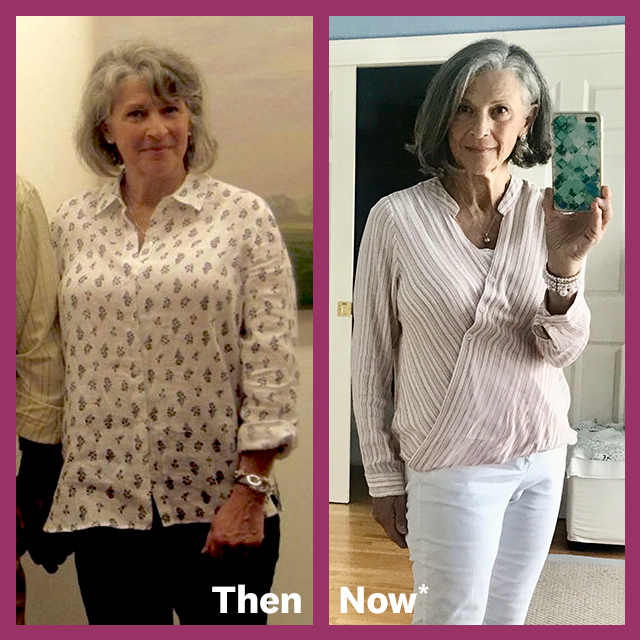 In addition to losing 28 pounds* and keeping it off for two years, I came out of retirement to lead WW Workshops as a WW Coach once again. As a role model for members of all ages, I can honestly say my age doesn’t hold me back—and I can’t wait to see what else is in store for me.