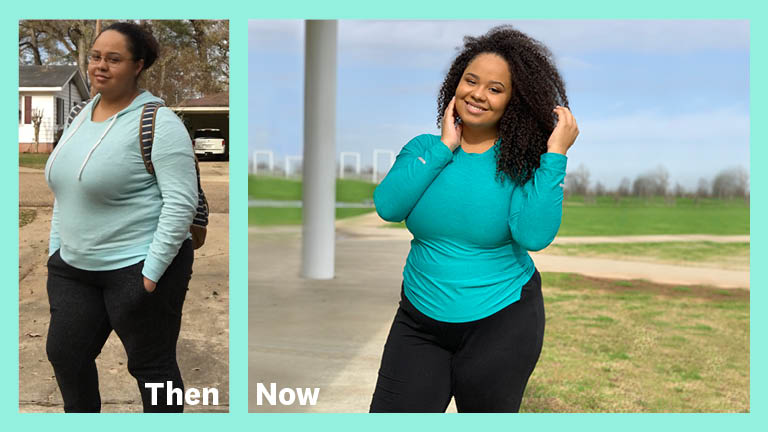 Her tears are relatable—and her journey is amazing.
Justyn, 23, lost 52 lbs* since joining WW in 2018

*People following the WW program can expect to lose 1-2 pounds/week. Justyn lost weight on a prior program and is continuing on myWW™.

In early March 2019, my voice shook as I stood among about 30 members in a WW Studio, struggling to explain all the ways my life had changed in the past weeks and months as I ran my fingers over the charm I’d just received for losing my fiftieth pound.  Mulling over the question I’d just been asked to answer—What did success mean to me?—I swallowed. I’d lost a huge amount of weight—and I did it without drinking gross smoothies or eliminating entire food groups. I had more energy, I was sleeping better, and my snoring had subsided. But the words? I couldn’t make them sound right.

When I let my last sentence drop off, applause filled the silence, giving me the strength to continue. To my surprise, I actually kept it together as I spoke.

It wasn’t until I slipped back into my parked car that my accomplishment set in. Because I’d begun documenting my weight loss journey on social media, and couldn’t wait to tell my followers about the goal I’d finally met, I opened Instagram and hit record.

When I posted my video, the views poured in. Hundreds of views turned into thousands: Totally out of the blue, my video went viral with more than 85,000 views and almost 700 people telling me how much I’d inspired them. Me!

I was a senior in high school in 2012 when my weight issues began: After getting my driver’s license at age 17, I stopped eating lunch at school, and instead, I’d take my car to the drive-thru and grab burgers and French fries, and I’d go to the grocery store and stock up on pizza rolls. After graduation, I commuted to my college campus from home, and my habits stayed the same. As I kept gaining, I became antisocial, skipping out on nights out with friends, family parties, even Thanksgiving. I had no desire to dress up, and I was self-conscious that people would notice my weight gain.

I wanted accountability, so I started an Instagram page and YouTube channel in November 2016. In an effort to lose weight, I’d try extreme diets like a 10-day green smoothie cleanse—but the moment I stopped, I’d fall back into old habits and gain the weight back immediately. But I still found kinship through my social platforms—hundreds of other people were also trying to find a healthier life.

I had graduated college in May 2017, and I was still stuck in the same rut. It wasn’t until October 2018, while scrolling through Instagram late one night, I came upon a woman named Felicia, (@feliciafitnesshealth) who had been on WW since May 2017 and lost 140 pounds*. She had posted so many photos of her meals and they all looked so good! With her feed in the back of my mind, the next morning, I drove to the nearest WW Studio to sign up.

When I pulled into the parking lot, I froze. Instead of exiting the car, I decided to direct message Felicia. Although we’d never spoken before, she responded right away: “Go in. It’ll be fine. You’ll like it!” she wrote.

Somehow, I felt reassured by this stranger: She was living proof that WW actually worked. Still, when I walked into the Studio, I lingered near the Wellness Check-in area for upwards of 10 minutes, watching as seasoned members met with their WW Guides privately and weighed in. With proof that no one’s weight was broadcast aloud, I felt ready to step on the scale. But when I did, the number I saw was—wow. I weighed close to 300 pounds. Disappointment overwhelmed me as I crept toward the back row of seating in my first ever Wellness Workshop.

When the WW Coach kicked things off, I immediately felt a sense of belonging. At that point, since I outsized my siblings and cousins, there weren’t many people in my life that understood my weight struggle. But as members around me chimed in, I could totally relate to the way they’d been thinking and feeling. It was like I’d found my safe place.

Fueled by the WW community I discovered at my Workshop and on Instagram, I made a grocery list and went food shopping to kick off my first week following WW. Because I worked 12-hour night shifts at a hospital, I knew that planning meals and snacks would be extra important.

At first, I continued to rely on the same frozen meals I’d long eaten for lunch; they made life easier since I’d never cooked anything from scratch. The biggest changes I made were using the WW App to track them, and choosing healthier snacks—like pre-portioned bags of light potato chips—to munch on at work.

Even though I’d only made little tweaks, my weight dropped steadily as I returned for weekly Workshops. About a month in, I realized that while I could eat frozen meals and lose weight, I simply didn’t want to spend over 15 SmartPoints on my lunch. So I switched to a lighter brand of frozen meals that left me with 5 SmartPoints to spare.

Inspired by the homemade meals I saw on Instagram, I decided to try making my own dinners: I followed a recipe for a healthy casserole and another for chili. Both were so good! Plus they were much lower in SmartPoints values and salt content than my old premade standbys.

What Justyn ate then vs. now

In February, three months after I walked into my first Workshop, my weight plateaued. Discouraged, I skipped three Workshops in a row. In the weeks that passed I realized that showing up might help. When I went into the Studio, my Coach helped me realize the cause of my stalled progress: On busy days, which came up too regularly, I’d been defaulting to fast-foods—healthier choices than my old burger and fries, but still fast food. Understanding the way my choices affected my outcomes helped me make tweaks and move in the right direction. 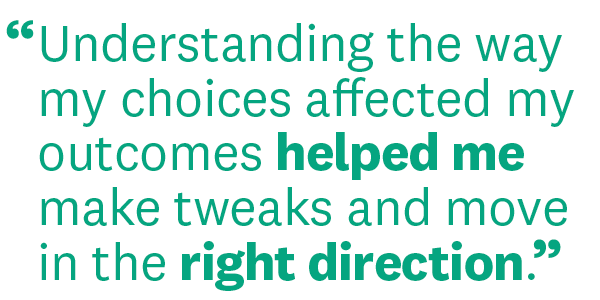 When my fifty-pound weight loss video began to go viral, it felt surreal. I’d been looking to others for inspiration for so long that it’s hard to believe people on Instagram, plus YouTube and Connect, where I also posted my video, have begun to look toward me.

Although I still have 100 more pounds to lose, I’m focusing on small goals: For instance, I want to start eating more fruits and vegetables, bringing homemade dinner leftovers to work for lunch, and going to the gym regularly. 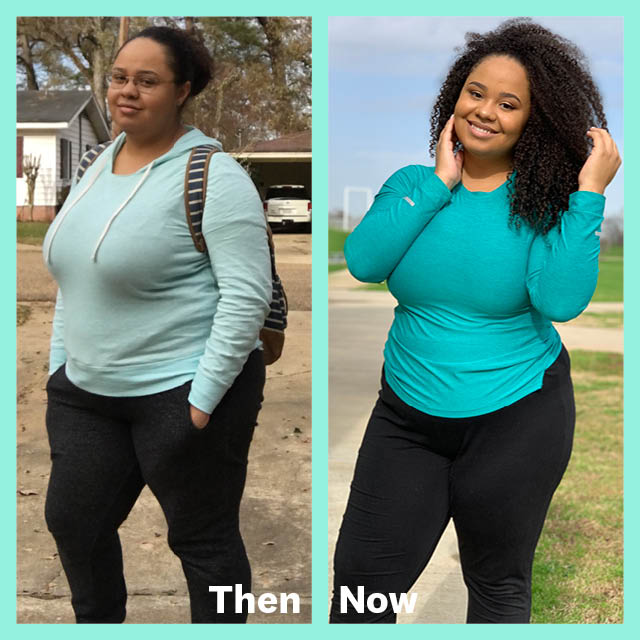 Along the way, I have every intention of continuing to celebrate non-scale victories—like the way my bath towel wraps around a little more of my body each day, and my newfound confidence to show my arms and smile at people I pass in the halls at work, which I’d never do before.

I’m keeping myself honest by sharing my ups and downs with my social media followers. After all, we’re on this journey together. And we all have the strength to reach our goals.

This article was reviewed for accuracy in July 2021 by Stephanie L. Fitzpatrick, PhD, senior manager for multicultural programs at WW. The WW Science Team is a dedicated group of experts who ensure all our solutions are rooted in the best possible research.