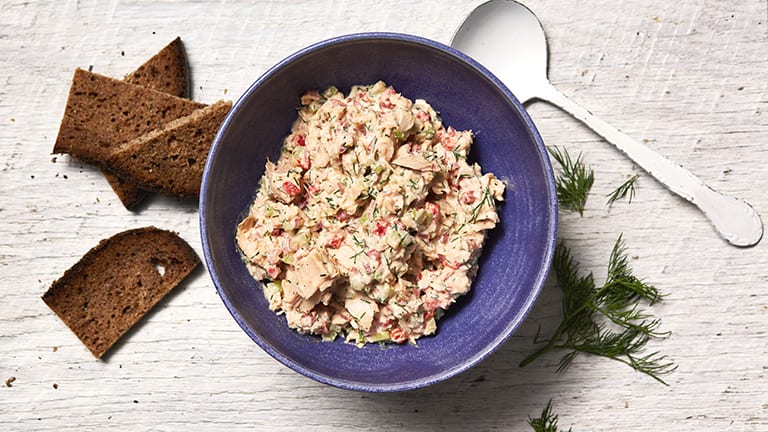 Is canned tuna worth the SmartPoints?

Find out how many SmartPoints are in canned tuna on myWW+.
By Debbie Koenig

Between its low cost and tremendous health benefits, canned tuna is a pantry MVP. It can be served hot or cold, in good old American dishes like tuna-noodle casserole and international favorites like Niçoise salad or vitello tonnato (that's veal in tuna sauce, an Italian classic). And let's not forget the ever-popular tuna salad sandwich!

When packed in water, the protein-rich fish known as chicken of the sea serves up 1 SmartPoints® value per 3-ounce serving on myWW+ Green and is a ZeroPoint™ food on Blue and Purple. (Other varieties, particularly those packed in oil, may have higher SmartPoints values, so use your WW app barcode scanner to check your specific brand.)

The real beauty of canned tuna? It stays good almost forever. For the best flavor, use within 3 to 5 years—but toss any cans that are dented, leaking, bulging, or rusted. Once a can is opened, transfer leftovers to a covered container and refrigerate; use within 3 to 4 days.

But first, a note on mercury. The toxic substance is found in nearly all fish, but levels become dangerously high in large species like tuna. Albacore "white" tuna is higher in mercury than canned light tuna. Currently, the FDA recommends limiting canned tuna consumption, especially for children and women of childbearing age. Specific recommendations can be found on the FDA's web site.

What you need to know about canned tuna varieties

In most supermarkets, you'll see a dizzying array of options for canned and jarred tuna—ever the more reason to use your barcode scanner! Here's the scoop on the most common varieties:

Ready to get your tuna game on?