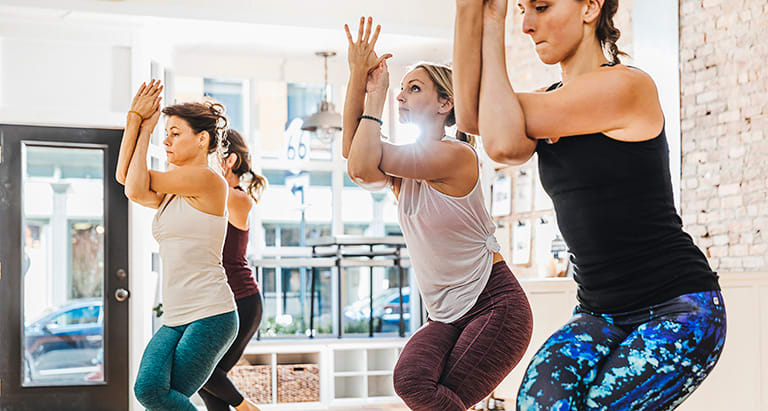 There’s no one type of yoga. Here are 10 yoga disciplines to try and what to expect out of a class.
By Amy Schlinger

When you hear the word “yoga,” what comes to mind? A slow-paced class where you stand and sit in different positions? A heart-racing class where you flow through different poses? Or maybe even a sweaty hour-plus long session, following a particular sequence of postures?

In all cases, you’d be correct. That’s the thing about yoga—it’s not a one-size-fits-all type of practice. There are actually many different kinds of yoga classes, so when you hear someone say, “Oh, I don’t like yoga, chances are they’ve only tried one type.” “If you don't like one particular class that’s not to say you won't like all yoga,” says Kristin McGee, celebrity yoga and Pilates instructor in New York City. “You may just need to try a few different styles until you find the one that resonates best with you.”

RELATED: Know Before You Go: Yoga

To help you determine which yoga discipline you’ll like, we spoke with expert yogis to help break down the different yoga practices and let you know what you can expect in each type of class. “Keep in mind that each yoga studio is very different, so I advise anybody looking to take a class to connect with the studio manager or owner to find out about their classes,” says Mandy Ingber, author of Yogalosophy for Inner Strength,  and a yoga instructor in Los Angeles.

10 Different Types of Yoga Classes You Can Try

Meaning “discipline of force,” hatha yoga is an umbrella under which many of the disciplines fall. In other words, most yoga classes are actually Hatha yoga classes. “In hatha you can expect a combination of physical poses, paired with breathing exercises that create well-being and clarity of the mind,” says Ingber. “A short meditation usually follows, too.”

Classical in nature, Integral yoga combines many different branches of yoga, with the goal of developing every aspect of one’s being harmoniously. “Sanskrit or the primary language of Hinduism will be used in class while you focus on breath work,” says McGee. “The goal is to help manifest the physical, spiritual, and mental aspects of your being.” If you’re not into spirituality, you may want to sign up for another type of yoga.

Vinyasa yoga is a series of Hatha yoga poses that flow together, which is why many refer to Vinyasa as flow. “Vinyasa is the combination of the breath and the movement working in tandem,” explains Ingber. “The breath and body work together to generate heat and prepare the body to go deeper into poses.” You can expect to do a vigorous flow (read: sweat-inducing) of sun salutations, and deepening the poses through the sequences. You’ll start standing, then move through inversions, then backbends, then seated postures, ending with Savasana.

Similar to Vinyasa, Ashtanga yoga is a flow style of yoga. What sets it apart is that you follow the same sequence and series of poses in a specific order. “Expect it to be very demanding and challenging, with a focus on breath and counting in each pose,” says McGee. “And you can expect it to be the same every time.” For those who like to know what to expect, this practice may be for you. But if you’re a newbie, you might not want this to be your intro to yoga. Also worth noting: There are also no classes available on new or full moons.

With roots in Ashtanga yoga, Power yoga is similar but moves much faster, with each teacher having her or his own variation of class that takes place in a regular or hot room. “Beryl Bender Birch and Bryan Kest are two names you’ll often hear associated with this style of yoga,” says Amanda Delaney, a certified yoga instructor based in New York City. “Power yoga builds internal heat, strength, helps with flexibility, and calms the mind. You’ll definitely drip sweat after all of the chaturangas and feel that yoga high!”

Named after B.K.S. Iyengar, a yoga teacher in India who was instrumental in bringing yoga to the West, this form of Hatha yoga is focused on alignment and detail in each posture. Expect detailed instructions, the use of props to help focus on alignment, and be ready for long holds on postures, explains Ingber. This is a good option if you want to learn the nuances of each pose.

There are certain channels of nadi, or subtle passages in the body, where prana, or energy, moves and can enter and leave, explains Delaney. “This prana ideally flows freely, though most commonly up and down the spine, through these passages of the seven chakras,” she says. “Kundalinī translates to ‘coiled one’ in Sanskrit. There is an idea that there is a coiled serpent at the base of your spine and as you practice Kundalinī yoga you wake up that energy and it rises through the chakras.” Intense huh? In this type of class, you can expect chanting, repetitive movement, meditation, and numerous breathing techniques to help wake the sleeping serpent at the base of your spine.

“Jivamukti is a style of yoga created in the ’80s by Sharon Gannon and David Life,” explains McGee. “You can expect it to be Hindu in nature with a vigorous flow of hatha poses that will give you a good, sweaty workout.” The practice is physical but this type is also spiritual and ritualistic, with chanting at the beginning of the class.

You’ll be walking into a heated room of roughly 100 degrees, and the class will take you through a set of exactly 26 postures performed in a certain order trademarked by Bikram Choudhury in the ’70s. “Nowadays, the yoga community has worked around his ownership by calling it ‘hot yoga’ and being more flexible with the routines,” says Ingber. “The series is 90 minutes and also includes two breathing exercises.” Water breaks are taken at specific times and there are also specifics about what position to rest in if you need a break. Don’t expect flow or lots of upper-body work though—you won’t even do a downward-facing dog.

If you’re looking to combine yoga with some fun, Aerial yoga may be the perfect new experience for you. This practice provides an opportunity to explore traditional asana from the air and the ground with help from a fabric hammock. “Gravity will help you realign the body, while you have fun floating in the air,” says Delaney. “Flipping upside down might be scary at first but once you get the hang of it, you’ll feel free.” Warning: The following day, you may feel sore in muscles you didn’t expect.