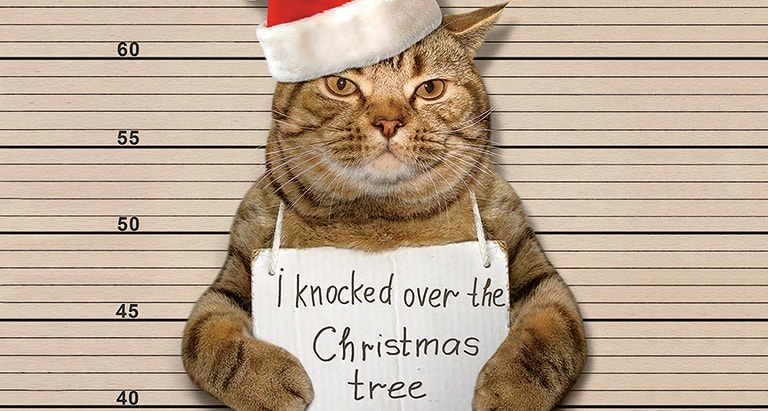 The holidays can be especially hazardous for pets. Here’s advice on how to make sure your animals stay healthy and happy during this busy time.
By Stephanie Emma Pfeffer

In the weeks before Christmas, calls to the ASPCA Animal Poison Control Center hotline (888-426-4435) increase by around 10 percent, and it’s easy to see why. Between toxic decor, unhealthy food, and distracted owners, the holidays can be a jumble of strange sights, sounds, and smells that can disorient and endanger your pets. Extra caution is the key to keeping them safe.

4 Ways to Keep Your Pet Safe During the Christmas Holidays


Glass Christmas-tree ornaments can shatter and small metal ones can be swallowed. “Even the hardened-dough trinkets the kids make at school can be toxic,” says Tina Wismer, DVM, medical director of the ASPCA Animal Poison Control Center, because the dough used is 50 percent salt. Dogs that eat it can end up with salt poisoning, which may cause vomiting, tremors, seizures, and even death. Tinsel is a notorious hazard, particularly for cats, which are often attracted to its shininess. If eaten, tinsel can perforate an animal’s intestines. “A popcorn garland might seem safer, but the string can still cut through the intestinal tract,” Wismer says. The same goes for ribbons and bows. Pet-friendly tree decorations include paper chains and large nonbreakable ornaments. But the safest bet is to set up the tree in an area that pets can’t access—ideally a separate room. Bonus: They won’t be able to climb it or knock it down.

Holiday plants add flair, but artificial versions are the best option. Mistletoe may cause vomiting and heart problems in both dogs and cats, and holly can upset their stomachs. Contrary to their reputation, poinsettia leaves are only mildly toxic, so a pet that eats one of the leaves will probably suffer minor vomiting or diarrhea but most likely won’t require veterinary care.

Eat, drink, but be wary


Chocolate, alcohol, and eggnog are known pet risks, but not everyone is aware of the dangers of xylitol, an artificial sweetener found in many sugar-free commercial baked goods. “A few cookies on a coffee table can be calamitous to a pet that eats them,” says Kurt Matushek, DVM, a Chicago-area veterinarian, as can sugar-free candy or gum. The harm done depends on the animal’s size, but relatively small amounts of xylitol can trigger liver failure.

Even worse are prescription meds, which were 2016’s number one most common pet toxin, Wismer says. Matushek recommends stowing all medications, as well as visitors’ purses and backpacks, behind closed doors.

Finally, keep most human food off-limits. When hosting, find alternatives to coffee-table spreads or put your pet in another room; it’s unrealistic to expect animals not to sample goodies within easy reach. And don’t feed bones or carcasses to a pet. Turkey meat is OK for a dog, as long as it doesn’t have much skin (the fattiness can cause digestive problems). Otherwise, stick to treats specifically formulated for your pet’s species.


Some pets enjoy the hustle and bustle of parties, but others get stressed. “If your place is usually quiet and suddenly 20 people are milling around, your pet could feel uncomfortable,” Matushek says. Using a gate to separate the animal from the action may allow him to feel safe but still part of things. If a pet truly seems overwhelmed, provide a safe, separate spot (like a bedroom or crate) where he can calm down.

If children are in attendance, keep a close watch. Matushek recommends introducing them to pets cautiously, and, he warns, “Never, ever, leave kids alone with a pet.”

Rely on your pet’s cues throughout the festivities. “Like anyone, pets can get cranky when tired,” Matushek says. While many cats will make themselves scarce (often slinking into another room to hide out), a dog may stick around and become increasingly agitated. “If your dog hangs back, his face gets tense, his ears lie back, or his tail is low, those are signs of unease,” Matushek says. “That’s when you may need to be a party pooper and simply take your pet away.”

Keep pets off the grass


With medical marijuana now legal in 29 states, “Marijuana poisoning was the biggest trend we saw during last year’s holiday season,” says the ASPCA’s Tina Wismer, DVM. Symptoms in pets include being disoriented, wobbly, hyperactive, or (in dogs) incontinent. If they ingest sufficient amounts, the drop in blood pressure can be fatal. “A human ‘dose’ is about 10 mg of THC, but many cannabis-laced edibles can contain 120 mg or more—and dogs will eat the whole thing,” Wismer says. If your pet can still walk after consuming marijuana, you likely can stay home (but call your vet anyway). If your pet can’t walk or is comatose, immediately take him to an emergency vet.

RELATED: Get Ready for the Holidays