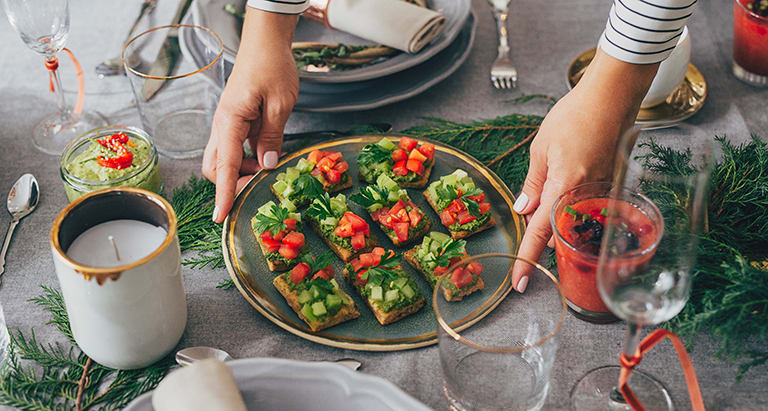 3 tips to host a healthier Christmas

Here's how to maximize yuletide happiness without loosening your belt.
By Kate Elizabeth Queram

For most people, the Christmas season is a joyful time, focused on family, togetherness, and the spirit of giving. For a lot of others, it’s also about food. Cookies. Candy. Hot chocolate. Egg nog. For someone trying to lose weight, the holidays can seem like a huge food pitfall. But they don’t have to be. To emerge on the other side of Christmas without a Santa belly, try hosting the festivities yourself—the healthy way.

Trying to explain to your mother-in-law why you’re not eating her famous pumpkin pie or refusing a helping of Aunt Sue’s sugar cookies is hard enough, but convincing your family to sacrifice their favorite foods feels like the epitome of awkward. The key, according to longtime WW Coach Gloria Munson, is to remember that committing to a healthy lifestyle is a permanent change, not a temporary diet plan that can be put on hold to indulge your craving for that slice of fruitcake.

“It’s just a lifestyle change, and you learn to adjust to that,” she says. “It’s not like, ‘Let’s just do it until the holidays.’ You have to be able to do it every day.”

When you’ve decided to do the holidays the healthy way, get your relatives on board. Munson’s a fan of the upfront method, where you tell them ahead of time what to expect on the dinner table in your home.

“I just would say, ‘I prefer healthy alternatives, so we're doing things like grilled salmon and baked potatoes,’ ” she said.

If you decide to serve the classics, provide yourself with plenty of alternatives. David Grotto, a registered dietitian and president of Chicago-based Nutrition Housecall, eschews low-cal versions of decadent dishes for naturally healthy alternatives, including vegetable platters, whole-grain breads, and fruit salads, while allowing himself small portions of the good stuff, too.

“You’re still eating the same amount of food, just less of the decadent stuff,” he says.

2. Invite guests to contribute their favorites

If you'd rather stick to cooking an all-healthy menu, and your relatives remain adamant about enjoying their favorite holiday dishes as-is, let them tell them they’re welcome to prepare and bring any foods you’re not serving. Brett Curtiss, a vegan who’s currently pursuing a master’s degree in dietetics, used this method while hosting Thanksgiving for the first time, and says it eliminated any potential food drama.

But, he adds, his guests didn’t need to bring much, because turning a holiday dinner into a healthy meal doesn’t have to mean sacrificing favorite dishes.

According to Munson, the base ingredients for most Christmas dinner foods are healthy on their own. “Turkey happens to be a very low SmartPoints™ value food, which is great,” she says. It’s the additives (cream in the mashed potatoes; gravy on the turkey) that up the calories, Curtiss says. As a vegan, he’s to experimented to find modified versions of most recipes, but says it’s not hard to do. Most dishes will taste close enough to the original that even non-healthy eaters won’t notice—unless you tell them.

“My mom makes this yam and apple pie that’s kind of like a sweet potato pie with apples, and one year she decided to use the vegan margarine instead of butter. It tastes exactly the same. Nobody knew the difference,” he says.

To eat healthy without sacrificing flavor, explore alternative ingredients like fat-free half-and-half or chicken broth instead of butter or cream in mashed potatoes. Sweet holiday treats, like cookies and hot chocolate, can also be modified to contain fewer calories without losing taste.

“Try no-bake cookies, which don’t contain butter,” said Bobby Scheve, executive chef at Beyond, an Asian-fusion restaurant in the Shenandoah Valley. “Or try using alternative sugars, like fruit, instead of white sugars.”

Making sure the healthy versions have the same appearance as the regular ones is also key: “If it doesn’t look right, people will be more hesitant to eat it,” Curtiss says. An appetizing presentation allows the meal to speak for itself—a good thing considering some guests can be turned off by the prospect of deviating from classic recipes.

“On our first Thanksgiving as vegetarians, we said, ‘Oh, we made this squash casserole, it’s really good. It’s totally vegan.’ I think that stigmatized it,” Curtiss recalls. “It’s better not to try to hype it up at all and just let people judge the recipe on how it looks and how it tastes.”

Basically, any of your favorite holiday foods can be made in a healthier and satisfying way, and you can make it through the season without having to loosen your belt. The important thing, Grotto says, is to know that you can do it.

“The holidays don’t have to be a weight-gain sentence,” he says. “If you’re on your game, you can lose weight and still have fun.”