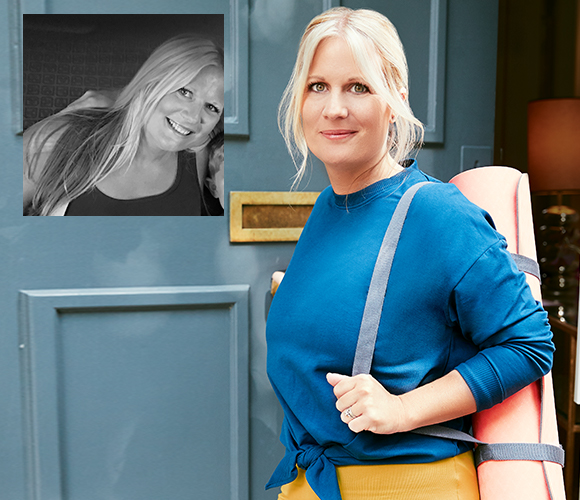 My 40th birthday was looming in October 2018 – and I was hiding from it. My husband Steve wanted to celebrate, but as we ate dinner at an Italian restaurant, I was self-conscious. I felt frumpy at 40.

I’d put on weight after having my two sons, Oscar, now nine, and Archie, now seven. Both pregnancies, but especially my first, were stressful as I’d been taking fertility treatment and also had a higher than average risk of miscarriage. It meant that my doctors had warned me not to do any physical activity, so I wasn’t doing any exercise.

Life then became a whirlwind of caring for two boys, and I barely had time to shower, never mind worrying about my diet or fitness. Exhausted, I ate convenience foods, followed by a takeaway and a glass of prosecco once Steve got home from work.

Check out our new mums hub

My son was diagnosed with autism

Then Oscar was diagnosed with autism. It was overwhelming and I was so busy with my job, taking Oscar to hospital appointments, and ferrying Archie to football and Cubs that somewhere in the middle of it all I lost sight of me.

My confidence dwindled and I stopped socialising. Oscar would cry if there was a change to his routine, so I wanted to stay at home with him. I became so consumed with caring for the boys that I didn’t even feel like me anymore.

On some level, I was aware that I was feeling low and wanted to fix it. So in September 2018 I went to a local WW Workshop. However, I wasn’t focused, and while I found myself enjoying chatting to the other members, I didn’t really follow the programme. That’s how I found myself on my 40th birthday in a less than celebratory mood.

I threw myself into the WW programme

Then, five months later, I overheard a mate of ours say to Steve: ‘I knew Donna back in the day when she was slim and good-looking’. Hearing that comment sparked something inside me. I threw myself into the WW programme.

In my first week of sticking to the programme I lost 8lb. With my motivation level on a high, I batch-cooked in the evenings, getting the boys involved too. Oscar had issues around food, crying if I tried to make him eat anything that wasn’t beige. Now, watching me enthusiastically cook from scratch, he became interested in other foods, even helping me chop veg. In the morning, he’d share my bowl of fruit salad and at dinner, he loved making his own veggie pizza toppings on a WW wrap base. He also discovered sugar snap peas, which he loved eating raw. I was over the moon – something green at last!

Life was also made easier by the Headspace meditations on the WW app. Before, whenever Oscar had one of his meltdowns, I’d become stressed trying to calm him down. Now I take five minutes out to meditate, which puts me in a positive space, so I’m better able to soothe him.

Slowly, I was rediscovering my confidence and spirit of adventure. We started exploring the countryside more as a family, I wore my Fitbit everywhere and also started going to my local gym. My life now is still about being a wife and mum, but with more me-time. I’m healthier, happier and, after dreading becoming 40, I’m embracing turning 41.