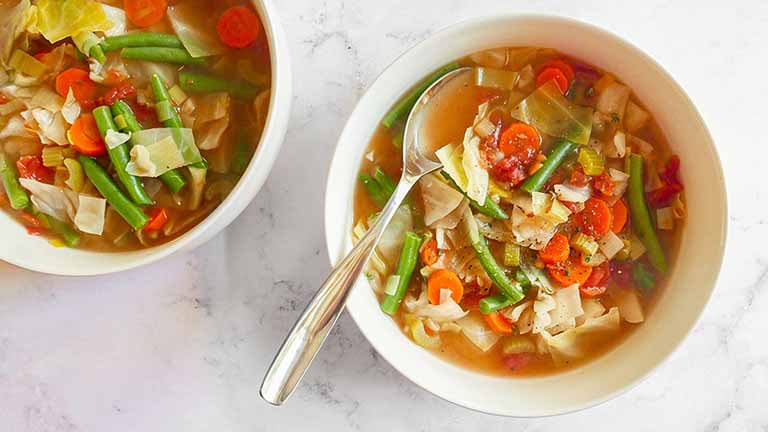 How to make delicious soup from almost anything

What cooks quickly, is a virtual dumping ground for wilted produce and leftovers, relies heavily on canned goods and freezer staples, and can be easy on the wallet? Soup!

When paired with bread or a side salad, a homemade bowl of goodness makes for easy meals you can enjoy tonight for dinner and tomorrow for lunch, or freeze in single portions to reheat whenever you want. While there are loads of big-batch soup recipes you can follow with precision—see below!—here’s how to throw together a soup made from pantry items in a snap:


Most soups are made from canned, homemade, or boxed broth. You can also start with a bouillon cube or granules and follow package directions. (Typically, you’ll use a ratio of one bouillon cube or one teaspoon of granules to one cup of boiling water.)

When you’re out of broth and bouillon, you can still make a flavourful soup base with plain old water. The key is to add a variety of ingredients that rank high on the flavour scale: Be generous with aromatic vegetables such as onion, celery, and carrots, if you’ve got them on hand, or add instant flavour with fire-roasted canned diced tomatoes, a good long shake of dried seasonings, a splash of soy sauce, or a spoonful of pesto. Just be careful not to use too much water: It’s easy to add water or tomato juice to thin out too-thick soup, but it can take hours of simmering to thicken one up. Rather follow a broth recipe?


While there’s no magic formula, a basic ratio of 1 cup liquid to ½ cup-¾ cup solid ingredients is a good place to start.

Shelf-stable pantry ingredients such as canned chickpeas and black beans, and dried rice and barley are really just future soup stars in the making. Stir beans in toward the end of cooking just enough to heat them through. Stir in grains for their recommended cooking times. If you want to add pasta to your soup, that’s fine. Just be aware that some shapes of pasta seem to absorb unlimited amounts of liquid so if you use too much pasta, you may end up with more of a risotto. Tip: To keep portion sizes in check, consider cooking pasta separately and just adding a few cooked spoonfuls to each serving of soup.

Fresh produce such as diced potatoes, onions, and carrots—which are nice-to-haves, but not necessary—can be boiled in soup until tender for about 10 to 15 minutes while frozen vegetables like chopped broccoli, peas, and peppers don’t need to be thawed at all: Since most veggies are blanched before freezing, they just need a few minutes in the boiling liquid to heat through.

Canned, drained vegetables such as corn and green beans, should be stirred in toward the end of cooking—just enough to heat them. Canned tomato products such as diced tomatoes and crushed tomatoes can help thicken and flavour your soup’s base. Add them with your broth or soup base.


Chop up or shred roasted chicken and add it to your soup until heated through. Frozen, cleaned shrimp cook in minutes in a simmering pot of liquid—even faster if they’re already cooked (defrost first for the best texture). The same goes for raw chopped chicken or turkey breast. Just season with a little salt and pepper, and simmer a few minutes until cooked through. And don’t overlook deli meats: sliced turkey, Canadian bacon, and roast beef are all tasty soup add-ins. The same goes for cubed baked, firm, or smoked tofu. Add them toward the end of cooking so they just heat through.

Step 4: Make it creamy without cream.


Pureeing some of the ingredients in your soup creates a smooth, creamy base. Blend it all or just partially, depending on your preference. You can use a blender (in batches if necessary) or an immersion blender which lets you puree the soup right in the pot. Just make sure the immersion blender is touching the bottom of the pot when you turn it on so your soup doesn’t splatter all over the ceiling!

4 more ways to amp up the flavour in homemade soups

16 soup recipes to inspire your next DIY pot


Don’t know where to start? The answer is here! The recipes below feature a range of flavour profiles to get your gears turning. And remember: Soups are forgiving! If you don’t have the specific fresh vegetable a recipe calls for, you can always swap in a frozen or canned version, or add another fresh vegetable you may have on hand. The same goes for dry goods: If you don’t have refrigerated tortellini, use frozen pasta or your favourite dry shape instead. There are an infinite number of delicious soup combinations—so get cooking!

Pasta soup with cannellini and escarole

Leslie Fink, MS, RD has been working at WW for 20 years. In addition to her role as a WW Nutritionist and Recipe Editor, she works on food and program development for a variety of projects such as the WW cruises, WW Ambassador partnerships, WW Fresh, and WW X Blue Apron. Leslie helps bring delicious food and meal ideas to WW events, program materials, and more.