*People following the WW program can expect to lose 1-2 pounds/week. Josh lost weight on a prior program and is continuing on myWW+™.

As told to Elizabeth Narins

Social media is making us all weird: We look at too many photos of ourselves. Although my whole personal brand is about being thick and owning it—not being afraid to wear a Speedo with Timberlands—there was a point when I saw some really un-killer vacation photos of myself looking like Shrek and crossed over from feeling myself to really not feeling great. I was like, this isn’t good. I’ve gone too far.

It’s not like I was overweight as a kid. Both of my parents were doctors so there was a lot of, “Do you really want to eat that Twix bar? How about some hummus?” when I was growing up. In the 80s, there weren’t as many healthy options for kids like me who just wanted to pour candy into their eyeballs. So when my parents tried to sell me on baby carrots after school, I was like, “This party sucks!” They did the right thing; it’s just that when you’re seven and everyone else your age is drinking Capri Sun, it’s tough to buy into it.

As soon as I was out on my own with a couple of dollars in my pocket and able to make my own decisions, all hell broke loose. I ate whatever I wanted—like an unsupervised 13-year-old at a sleepover party.

When you’re in your thirties and working, and it takes you two weeks to recover from partying for one night, the last vestige is eating. I felt like, even though I’m old and washed up, I’m still going to eat good stuff because it feels good.

Some of my habits bordered on ridiculous: I would eat an entire baguette in one sitting—just put it all in my mouth at one time—or a whole bunch of toast. Now, toast is delicious; whoever decided to cook bread again is brilliant. But my carb game was just too wild. Without even thinking about it, I would eat while doing a million things like walking and talking on my phone. I wasn’t making active choices, just saying, BOOM, I’ll take that.

Although my family didn’t directly impact my decision to make a change, my brother is an amature bodybuilder and my dad has dad abs. They all eat bird seed and nuts and berries for dinner—all ultra healthy. I wanted them to see that I could do it, that I could get down with the fitness party.

On the internet, you’re always inundated with wild new ways to lose weight—like intermittent fasting where you eat for five minutes a day to get back to your birth weight of 8 pounds. I had tried some weird super food cleanses that models do, but they weren’t working for me—I just didn’t feel good. I also tried keto for a while, but I was like, blending salami and drinking it, and it made me feel weird. I wanted something that actually worked—something that had been around forever.

I started reading about WW, which my wife’s mom had been on for 40 years. She looks good! Although I thought the program might be dusty, when I looked into it, I realized it’s super cutting-edge—everything you need is in the app.

When I downloaded the WW app in July 2019, my first move was to get my snacking under control. Bread is god but you can’t just eat it all day long. Instead, I started snacking strictly on  ZeroPoint foods, like a ton of fruit. I also changed up my breakfasts: I’d eat eggs for breakfast instead of cereal out of a salad bowl designed to feed multiple people at a dinner party. For lunch, I’d get a $17 tossed salad with chicken and mad dressing instead of a sandwich. The price of salad is way too high, but it’s not like I was shedding salty tears onto a piece of skinless chicken or crying in the shower in fetal position. For dinner, I continued to go out to dinner. I still ate Chinese food, just not every night since I found that you can have a solid Mediteranean dinner with pita bread for fewer SmartPoints and walk away completely full. It just wasn’t that hard.

Although I own a wine company, I’m not a tremendous drinker. On WW, I keep the liquor clear with a vodka soda or tequila, and I don’t have ten drinks. As for dessert, I’ve realized that you can’t eat ice cream cake every day—it’s too much party. You get chocolate wasted. Now when I’m out to dinner and the server offers dessert, I’ll be like, “You know what, I’m good,” then go home and eat one or two WW Ice Cream bars. Whoever is making WW Dark Chocolate Raspberry Ice Cream Bars, you are talented. They taste straight-up delicious.

Adding activity to the mix

My wife likes me big—like a bear. She was worried that I would lose too much weight on WW and become some weird fitness guy, start running half marathons and tough mudders, wear hydration packs, and change my name to Derrick. Some fitness people are just so intense about eating crystals and drinking honey and squeezing acai berries into their eyes. [Ed’s note: Do not try these methods at home.] They do run around with weights on their heads and swing tires; there’s a spinning place in my building where everyone just screams at you. But I was like, hold up, I don’t need a weighted vest with an altitude simulation mask. I realized that I could just do the elliptical decently hard a few times a week and get results. I don’t really have any goals—I just want to feel good.

I’d gone through a long period when I was only wearing these crazy sweatsuits. I mean, sweatsuits obviously rule, but I think it had been kind of a cover for me to wear sweatpants. A few months into WW, after I’d lost 20 or 30 pounds, I got into some real pants and wore them to my office where someone said, “You own pants?” and I was like, “Yo, I’m in pants!” That’s when I started feeling good. 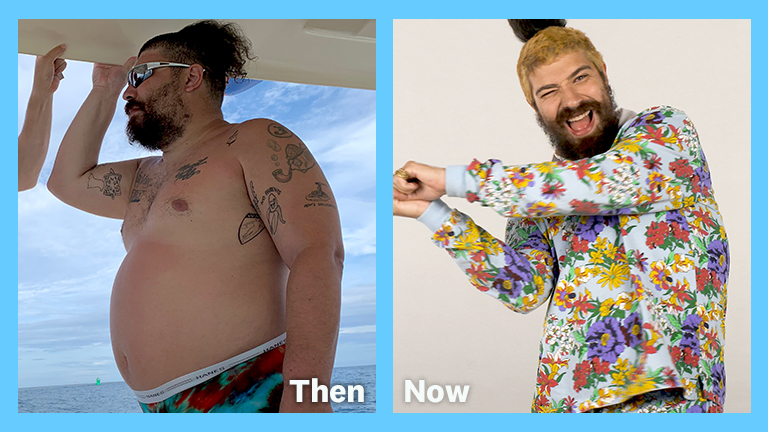 I still don’t want to be, like, a health guy or a fitness guy. My @TheFatJewish brand is such a part of who I am. Of course I was worried that weight loss would impact my career—my entire internet persona is about making bad decisions and encouraging people to go out and do questionable things, to wake up with some regret. But I’ve realized that you can go out and do some really lit stuff or get a horrendous tattoo but still drink water, eat sensibly, and feel pretty good. Just because I don’t want to feel like absolute garbage doesn’t mean I’m not a good time.

Now when I see myself in photos I can’t even really believe it. I sacrificed a few tiramisus and went on the elliptical and got some results—I just didn’t work that hard. I’m pretty much a disbeliever in everything, but WW actually works. It’s inspiring to think that some of these things aren’t as daunting as they seem. This is my life. I earned it.