How This Classically Trained Chef Lost 53 Pounds* Without Sacrificing Flavor

*People following the WW program can expect to lose 1-2 pounds/week. René lost weight on a prior program and is continuing on PersonalPoints™.

When I started culinary school in the fall of 2003, food filled my days: At least four times a week, I’d cook a seven-course meal with my classmates, then eat it with wine pairings or sweet tea and lemonade. Because one of our instructors’ favorite tips was “fat equals flavor,” our gourmet feasts weren’t exactly light.

It should come as no surprise that over the course of four years, I gained about 40 pounds on top of the excess weight I’d been carrying around since I was diagnosed with obesity as a child.

After culinary school, I worked as a recipe developer on a cookbook about Louisiana cuisine and spent much of my time tasting rich dishes from gumbo to racks of ribs and potato salad. Physically uncomfortable in my own skin, I’d shy away from social events and didn’t even dance at my own wedding to avoid putting my body on display. Food, I found, gave me temporary comfort. When depression and boredom triggered closet eating, I didn’t know how to break the cycle.

In July 2010, a co-worker invited me to a WW Workshop and I agreed to go despite low expectations that the program would work for me. As I listened to WW members share their stories, I realized that I wasn’t the only one who had a nuanced relationship with food. When one member talked about her motivation to change, I considered my own “why”: I didn’t want to live life on the sidelines any more.

After the Workshop, I decided to give WW the old college try. The biggest change I made: I actually began paying attention to what I was eating. Because tracking fast food and junk food cost me major PersonalPoints. I modified and measured what I ate to stay within my Daily Budget. At the get-go, I realized that incorporating fresh fruits, vegetables, and local seafood into meals delivered just as much flavor as fat. After that first week of making smarter choices and measuring out my portions, I lost four pounds*!

What Rene ate then vs. now

After losing about 30 pounds,* I decided to start moving more to support my weight-loss journey. While most beginners dip their toes into cardio first, I started strength training with a personal trainer. After a few months of sessions, I began walking on the treadmill in short increments of 20 or 30 minutes until one day, I began to jog for about 30 seconds. Over time, 30 seconds turned into a minute, then two. In 2014, I signed up for my first 5K.

The race delivered such a rush of adrenaline that I wanted more: With a few WW members, I started running one 5K every month. Two years later, I took on a 10K, and in 2017 I ran my first half-marathon.

The extra activity didn’t just give me confidence: It helped me with emotional eating, too. Whenever I’d head to the pantry aimlessly searching for a snack, I’d divert myself with a walk or some resistance training and ask myself, what am I actually craving? Typically, the answer wasn’t food.

Although weight loss motivated me to start moving in the first place, I now see activity as a way to show off all my body can do.

After just over a year on the program, I was at a wedding with my husband when a song I liked came on. Having lost 38 pounds,* I no longer felt the urge to hide. Instead, I left my seat and hit the dance floor.

On our way home that night, I realized it: I’d achieved my goal of getting off the sidelines! My weight had held me back mentally and physically in so many ways, and now it doesn’t. I’m the one enjoying myself now—and it feels amazing.

Now that I’ve been on the program for almost 10 years, I’ve lost 53 pounds*. I'm enjoying new whole grains on the ZeroPoint foods list like bulgur, buckwheat, barley, and quinoa—foods I didn't typically eat before WW. Overall, my meals are heartier and I snack less as a result. And the best part, by far: I still have a PersonalPoints Budget for wine. I love my wine!

In 2015, I logged on to Connect (@renefalgout1) and shared a Then/Now photo with a caption about my progress. To my surprise, the post received over 1,000 likes! Over the next year, I gained a following on Connect and launched my Instagram account (@wwfitfoodie), where I use my culinary experience to share recipes.

Since I began posting about my journey, I received so many inspiring messages from members that I left my job in 2018 to work with them one-on-one as a full-time WW Coach. 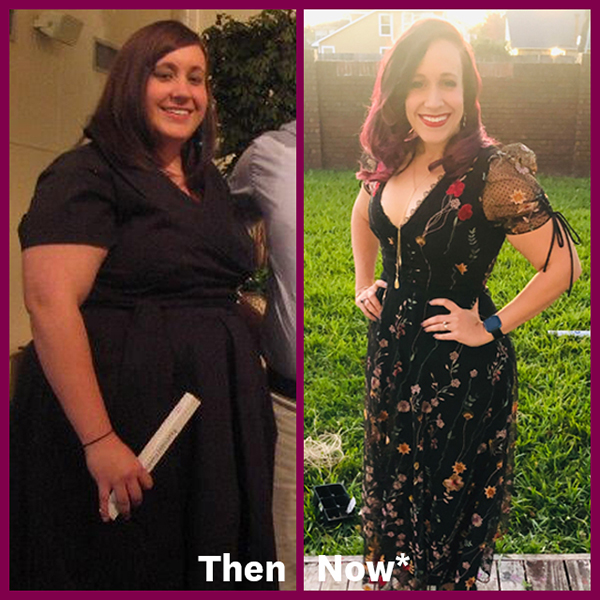 Watching other members grow has been incredible—they’ll start with one mindset or self-image and gain a sense of confidence over the years. Hey, it happened to me! Before joining WW, my favorite thing to do was to sit on the couch and watch TV. Now, I’m training for my sixth half-marathon! I’ve opened up and blossomed, and I’ve even set a major goal for myself: To run a marathon in January 2022. The best part? I know I can do it.