How This Baker Lost 113 Pounds* Without Giving Up Homemade Cookies

*People following the WW program can expect to lose 1-2 pounds/week. Maria lost weight on a prior program and is continuing on PersonalPoints™.

“Your mom is really fat,” my son’s first-grade classmate told him after I chaperoned their school trip in December 2017. Having grown up with weight issues, I was used to being teased about my body; long ago, I’d surrendered to my size and developed a thick skin. But my son, who’s now 8, was new to the game: “I don’t want you to feel badly about yourself,” he told me through his tears. It completely broke my heart.

For years, my body made me feel so miserable that I dreaded social events. While I’d lost some weight before my wedding in 2006, I’d gained it back and then some during my two pregnancies in part due to emotional eating. Whether I was happy, sad, or bored, I’d feed my feelings with chips and cookies; as an amateur baker, I’d eat unlimited quantities of whatever came out of my oven.

My unhealthy eating habits worsened as my son and daughter, who’s now 12, got older: I’d help them both clear their plates, supplementing my own meals with kid foods like chicken fingers and French fries. It wasn’t until my weight began to affect my son that I decided to make a change; I wouldn’t let something I could control hurt my child. What’s more, it was becoming harder for me to teach my daughter to love her body when I couldn’t embrace my own.

Yearning to set a good example for my kids, I joined WW in January 2018. I never weighed myself at home, so when I stepped on the scale for a Wellness Check-in before my first WW Workshop, I was shocked by the number I saw. During the same Studio visit, my WW Coach said something that resonated: “If hunger isn’t the problem, food isn’t the answer.”

RELATED: Exactly What to Expect at a Wellness Workshop

Right away, I started being more mindful of my hunger signals. Before I snacked out of boredom, I’d ask myself, “Am I really hungry?” When the answer was “no,” I’d reach for a book instead of a bite.

I also stocked up foods like eggs, fruits, and vegetables, the ZeroPoint foods on my individualized ZeroPoint foods list. Every morning, I’d make a spinach omelette for breakfast. I’d prep for weekday lunches on the weekend by preparing a whole package of boneless skinless chicken breasts to add to salads later on. After only a few days, I began feeling better about my body, which motivated me even more.

What Maria ate then vs. now

A love for baking

At first when I joined WW, I was worried that I’d have to stop baking. But early on, I realized moderation—not elimination—would be the key to my success. Now, when I eat a fresh chocolate chip cookie, I’ll balance it out by having a salad for lunch or skipping my pasta with dinner.

While I used to add an entire stick of butter to my banana bread, I’ve also figured out ways to lighten up my favorites. Now I sweeten recipes with ripe bananas instead of sugar.

Being the mom I want to be

Changing my diet has helped me lose 113 pounds*—that’s almost a whole person! And I haven’t had to join a gym: I stay active by keeping up with my kids. 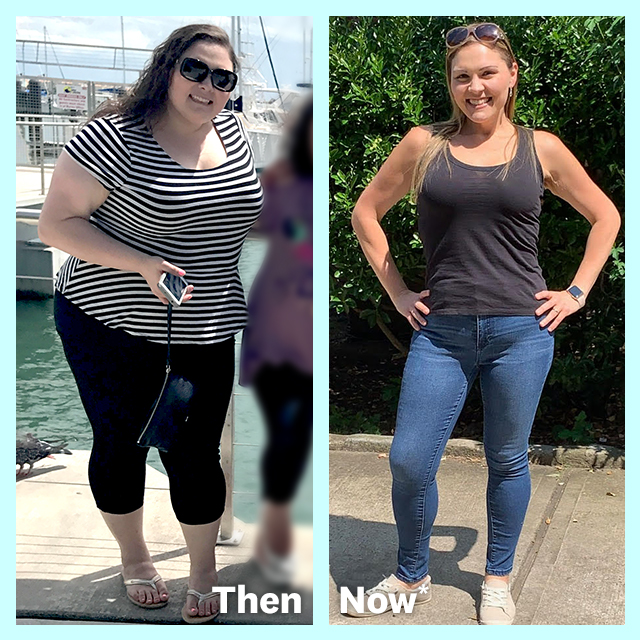 Although my son no longer remembers what his friend said about his mom, I know he sees how much happier I’ve become. My daughter also sees differently now that I’m practicing what I’ve long preached. I finally feel like the role model I want to be for my kids.

Even better: For the first time I can say I truly love myself.