How I Lost 34 Pounds* and Recovered My Confidence

When Favin rediscovered the weight loss program she’d followed as a teen, she found that its new features led to even better results.
Favin, 34, lost 32 lbs* since joining WW in 2017

*People following the WW program can expect to lose 1-2 pounds/week. Favin lost weight on a prior program and is continuing on PersonalPoints™.

In spring 2019, I got a Facetime call from the last person on earth I’d expected to hear from: It was Oprah. My jaw dropped. “Oh hi, Oprah,” I managed to mutter as if we were old friends, exercising every ounce of self-control to keep my calm. A long-time WW member, she was calling to congratulate me on losing 32 pounds on the program.

Her words of encouragement meant the world to me—especially since I’d struggled with my weight for what felt like forever.

My insecurities set in around age 12 as I grew taller and matured faster than other girls my age. Having noticed the way my mom refused to swim so she didn’t have to be seen in a bathing suit, I became keenly aware of my weight.

My parents tried their best to serve balanced family meals at home, but it was a challenge since they both worked. Because they were so busy, on occasion, we’d end up eating pizza, Mexican fast food, or Chinese takeout like orange chicken and white rice, which I started to prefer and eventually request. Also, my father, a refugee from Eritrea, often spoke of times when food was scarce so I wouldn’t feel right about not finishing every morsel on my plate.

When I was 14, my mom took me to WW, and while I tried to follow the program, if someone offered me a candy bar at school, I’d eat it regardless of whether it fit into my Budget.

Later on in my teens, I joined swim and soccer teams that helped me manage my weight. But then, after graduating from college in 2007 and settling in Chicago where I met a guy who I thought I’d eventually marry, I let myself go throughout the four years we dated. Eating whatever I wanted, like takeout for dinner and peanut butter sandwiches as snacks, I gained about 50 pounds. It wasn’t until he broke things off that my emotions got the best of me: My heart was shattered, but food seemed to help. On most days, I’d have a bagel for breakfast, a cookies-and-cream milkshake in the afternoon, and pizza for dinner. I felt utterly unlovable.

About a year after my breakup, I asked myself one night, “What’s going to make me feel like I can move forward?” Then I remembered the way I’d felt when I’d belonged to WW years ago: The program helped me go to bed every night with a plan and the confidence that tomorrow would be better.

When I woke up the next morning, I went to a WW Studio in Chicago to sign up and attend a WW Workshop. When I stepped on the scale for my first Wellness Check-in, I actually felt relief: I’d spent so long convincing myself that I didn’t deserve to be cared for, and here I was looking after my health.

Thanks to the WW Coach who led that day’s Workshop and the members that I totally clicked with, I left with a new sense of self-worth.

Getting mindful about meals

As a second-time WW member, I noticed right away how much the program had changed since I first joined 20 years ago. Mindset, I learned, is a huge part of the equation whether your goal is to lose weight or get well. Tracking helped me zero in on the fact that I was eating heavy meals for breakfast, lunch, and dinner regardless of my hunger signals. As soon as I began to think about why I was eating, it became much easier to make changes—and see the results on the scale.

A little over a year after re-joining WW, I was losing weight at a slow but steady pace. After I followed a plant-based diet on a week-long vacation and loved the way I felt, I decided to cut out red meat and limit my cheese intake while continuing the WW program.

To find simple PersonalPoints™-friendly recipes, I started ordering WW x Blue Apron meals like roasted cauliflower steak and roasted salmon with salsa, which made cooking so convenient that takeout appealed to me even less.

What Favin ate then vs. now

RELATED: All about ZeroPoint foods

Learning to bounce back

Throughout my journey, there have been weeks when I didn’t lose any weight at all. Instead of pouting, I problem-solved using the WW App to figure out where I was going wrong. Once, while scrolling through the food I’d tracked, I realized that I’d been eating larger portions than I’d been accounting for. At the same time, my activity levels, which the App pulls in from your phone or fitness device after you sync it, had dipped. Right away, I was able to get back on course: I started tracking more diligently, found a super-fun hip-hop yoga class, and broke right through my plateau. 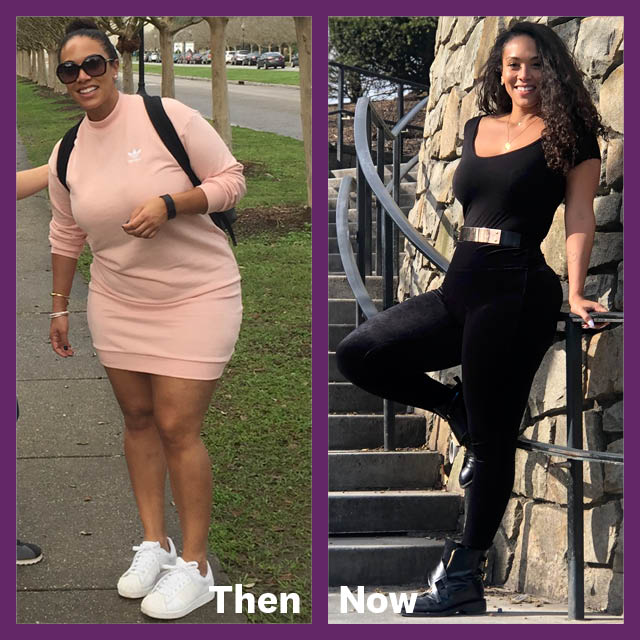 Now that I’m down 32 pounds*, I’m the version of me that I’ve always wanted to be. It’s not all about the weight, though: it’s about control, self-esteem, and mindfulness. I feel sexy again.

Talking to Oprah motivated me to continue on my wellness journey: When she looked me in my eyes and said, “I’m so proud of you,” I realized: I’m proud of me too.