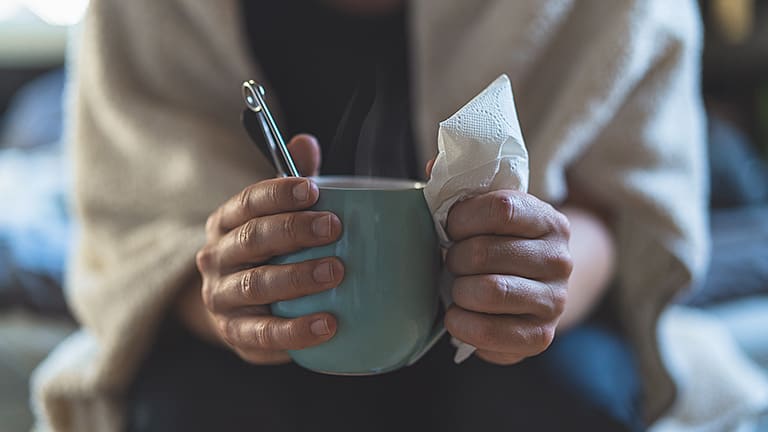 Is the keto flu just a nuisance, or could it indicate something more serious?
By Kimberly Holland and Ashley Mateo

As the body transitions to new macronutrient ratios on the keto diet, some adherents report unpleasant flu-like symptoms—one of the reasons why so many people give up on the diet. Here’s what else you need to know:

RELATED: How the ketogenic diet compares to WW

What is the keto flu?

The metabolic shift that results from radically reducing your carbohydrate intake on the keto diet can result in various side effects. Some of the most common symptoms of the keto flu include the following, according to the National Institutes of Health:

Symptoms can range from mild to severe and vary from person to person. They typically last three to 10 days, but can last a few weeks, according to Dr. Ken Berry, M.D., author of Lies My Doctor Told Me. “While the keto flu may feel miserable, he says, it’s generally not life-threatening and doesn’t necessarily warrant a visit to the doctor. As your body adjusts to the diet, the symptoms often pass.

The science behind what causes keto flu

Because there is very little published, peer-reviewed research that specifically examine the keto flu, there’s no consensus on exactly what triggers it.

Most experts think the symptoms stem from carb withdrawal since carbohydrates typically supply energy to the body’s cells and the brain. Another theory involves dehydration: When you reduce your carbohydrate intake and the body burns through its existing supply of glucose and glycogen, a substance it packs away in your muscles and liver as an alternative source of energy, your liver begins to break down fat. This leads to the release of compounds known as ketone bodies plus loss of water and electrolytes (namely sodium, potassium, and magnesium), minerals that conduct electrical currents and play a vital role in nerve and muscle functioning throughout the body. Meanwhile, low carbohydrate intake leads the pancreas to secrete less insulin, the metabolism-regulating hormone that also helps the body retain sodium.

In sum, these processes can leave keto dieters mildly dehydrated and low in essential minerals, which could be why they feel like they’re suffering from the flu, according to Kristen Mancinelli, RDN, author of The Ketogenic Diet: A Scientifically Proven Approach to Fast, Healthy Weight Loss.

In theory, this makes sense: Research published in the journal Medicine & Science in Sports & Exercise in 2018 has linked a two percent loss of liquid body weight to negative effects on your cognitive functioning; this could account for some of the most common keto flu symptoms.

One reported side effects that follows the keto diet transition is keto breath. Typically described as smelling fruity or metallic, keto breath stems from the presence of ketone bodies produced by the liver: beta-hydroxybutyrate, acetoacetate, and acetone, a component of nail polish remover.

“Keto breath is a temporary acetone smell to the breath,” Dr. Berry says, attributing the scent to an initial over-production of ketones that build up in the bloodstream. Although they are benign, the body gets rids of excess ketones through urination and respiration—hence, keto breath.

If your goal is to achieve ketosis, keto breath is actually a good sign—it suggests that your body is in a fat-burning state. The symptom tends to last just a few weeks while the body adapts to the keto diet, says Amy Shapiro, R.D., founder of Real Nutrition, a New York City-based nutritional counseling practice, who has monitored clients who’ve reported this side effect. Drinking more water to dilute the acetone and flush the excess ketones out of your system can help expedite a resolution, as can increasing your carbohydrate intake to reduce acetone production, although this could take you out of ketosis.

Headaches are another common side effect of transitioning to the keto diet—more than 50 percent of people experienced them in a 2008 study published in the journal Nutrition & Metabolism. Experts believe this symptom may stem from limiting the brain’s access to glucose, the simple sugars that comprise carbohydrates, which is typically the brain’s primary source of fuel.

Because it can’t store glucose, the brain typically consumes about 120 grams of glucose per day. But on the keto diet, adherents generally consume no more than 20 to 50 grams of carbs per day which may leave dieters feeling dizzy, distracted, lethargic, or bummed out at the onset of the journey.

Another explanation for keto headaches in the fluid loss that occurs on the keto diet. After all, more than 70 percent of the brain is comprised of water, so dehydration could have an impact. Potential proof: Drinking lots of water can help stave off keto headaches, according to research published in the Annals of Internal Medicine. Otherwise, the headaches should go away on their own once the brain adjusts to using ketones as a source of fuel.

How long does the keto flu last?

The keto flu is largely anecdotal; reports of how long it lasts depends on the person. Generally, reports suggest symptoms can kick in fewer than 72 hours after carbohydrate restriction begins and last anywhere from one to four weeks. The amount of glycogen stored in your muscles, your activity level, and the level and pace at which you reduce your carbohydrate intake can all affect your body’s tolerance.

Be warned that returning to the keto diet after deviating from the plan could set you up for a keto flu spell as your body readjusts.

Because there isn’t a known cause of the keto flu, there isn’t a proven cure, either. But there are some anecdotal remedies that could mitigate some of the symptoms or speed up the adjustment process.

Staying hydrated is always important for optimal health, but especially on the keto diet. Remember, your body gets rid of excess ketones via urination—and the keto diet can cause excessive urination as you adapt due to the loss of fluids stored with glucose in the muscles and liver, according to Shapiro.

If you don’t replace that fluid, dehydration can exacerbate keto flu symptoms. Even in the absence of keto dieting, hydration can help with fatigue and muscle cramping, according to 2011 research published in the journal Nutrition Reviews.

“If you quit carbs cold turkey, you may suffer from worse symptoms as your body switches gears,” Shapiro says—particularly if you’re used to eating a high-carb diet. Decreasing your carb intake slowly over the course of weeks could help mitigate symptoms until you get to your ideal keto diet ratio of carbs, protein, and fat.

When adjusting to the keto diet, the last thing you want to do is go crazy at the gym with activities like weight lifting. That’s because physical endurance temporarily decreases during the first week of very-low-carb eating, according to long-standing research published back in 1983 in the journal Metabolism.

Meaning? “You won’t have the energy you need to get through your workout or to repair and refuel correctly afterwards,” Shapiro says. You’re better off with lower intensity exercise such as walking and jogging.

“Lack of sleep can increase cortisol levels and increase stress, therefore making symptoms worse,” Shapiro says. Although keto diet can reduce REM sleep, according to a study published in Nutritional Neuroscience, and it can also make you more likely to wake up throughout the night, researchers reported in an Advances in Nutrition study, it’s in your best interest to try to get lots of sleep when transitioning to the keto diet. “Sleep helps the body to repair,” Shapiro says, “so adequate sleep will help with overall functioning.”

Low levels of electrolytes—namely sodium, potassium, and magnesium—can exacerbate keto flu symptoms. While potassium-rich foods like bananas, white beans, and potatoes tend to be limited on the keto diet, keto-friendly options like green leafy vegetables and avocados can help. Adding salt, which is comprised of sodium, to your food could also alleviate symptoms, as can sipping on a sugar-free electrolyte drink. So far as supplements go, popping a magnesium pill may reduce muscle cramps, sleep disturbances, and headaches.

That said, there’s no reason to buy into additional dietary supplements marketed online, though. “Supplements are not regulated by the FDA,” Shapiro warns, so you should consult with a physician before taking them.

How serious is the keto flu?

Unfortunately, it’s not possible to know whether the ultra-low-carb, high-fat diet will lead to the keto flu.

While symptoms are manageable and short-lived most of the time, according to Dr. Berry, they can sometimes pose health risks.

“Dehydration and electrolyte imbalances can be dangerous and lead to irregular heartbeats, fainting, coma, and death,” Shapiro says. You should definitely see a doctor if you have any concerns.

What’s more, the verdict is still out on whether the keto diet is safe. While it can have therapeutic benefits for seizure control in epileptic patients, has been shown to improve blood sugar control for patients with type 2 diabetes, and can lead to significant weight loss, more research is needed on the keto diet’s sustainability and overall health impact, particularly since it has been linked to some serious long-term side effects. These include:

Given these risks, anyone with a pre-existing liver or kidney condition, heart disease, or diabetes should ask a doctor before embarking on the keto diet or making any other significant dietary changes. After all, some experts feel as though the keto diet’s hyped-up benefits exceed available evidence, according to a July 2019 essay published in JAMA Internal Medicine.

If one thing’s for sure, it’s that eliminating entire food groups isn’t easy (or widely recommended)—ever the more reason to approach fad diets with caution.