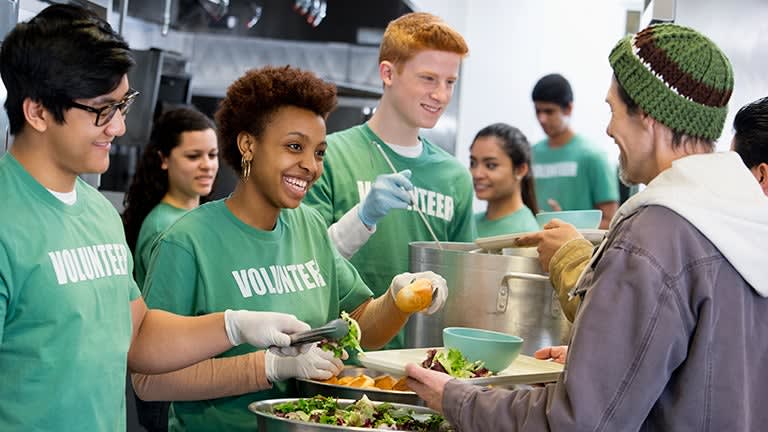 4 powerful ways helping others could boost your health

Engaging in acts of kindness can make a difference in people’s lives—yours included. Keep reading to discover the potential health impacts of giving back, plus tips for finding a volunteer opportunity you’ll love.
By Laurel Leicht

Don’t be surprised if you feel your spirits lift after you drop off a neighbor’s laundry or stock shelves at your community food pantry. In fact, goodhearted gestures such as helping, sharing, donating, and volunteering—known as prosocial behaviors—may be good for you in multiple ways. “Engaging in kind behaviors has a robust impact on a person’s wellbeing,” says Lara Aknin, PhD, an associate professor of social psychology at Simon Fraser University in Canada.

Read on to learn about the win-win effects of helping your fellow humans, plus tips for finding a volunteer opportunity you’ll love. If you are in a position to support others in need, consider this one more excellent reason to get involved.

With 2020 and 2021 marked by intense hardship for millions, opportunities for community care and volunteering abounded. An October 2020 study of more than 1,000 adults found that on days when people lent a helping hand during the pandemic—either with an organized group, as when running a clothing drive, or autonomously, like when checking in on homebound neighbors—volunteers reported an increase in positive emotions.

Even temporary effects like those reported in the study are meaningful, says co-author Nancy Sin, PhD, an assistant professor of psychology at the University of British Columbia. “Fluctuations that seem minor can accumulate to impact your health,” Dr. Sin explains. “Having more positive emotions more frequently is related to healthier patterns of cortisol, lower inflammation, and better sleep.”

2. Volunteering may help your heart

Lending support to Dr. Sin’s findings, some published evidence suggests that engaging in heartwarming acts may actually benefit your ticker. A four-year study of more than 1,600 adults over age 50 found that those who averaged around 2 hours a week of volunteering were 40% less likely to have high blood pressure than those who didn’t volunteer. That’s not to say smaller doses of giving back can’t be helpful, too: A study published in the Journal of Aging and Health found that people who carved out any time for volunteering—just 1 to 99 hours a year, in this case—had a lower likelihood of experiencing hypertension than those who didn’t volunteer at all.

3. Volunteering may benefit your brain

Could helping others sharpen your thinking skills? A 2017 study published in The Journals of Gerontology crunched data on 11,000 adults and found a correlation between volunteering and cognitive functioning. Even when researchers controlled for factors such as education level and work schedules, people who spent at least an hour in the previous year volunteering scored significantly higher on tests of memory and processing than those who had not volunteered.

4. Helping others may help you live longer

It’s possible that doing good could lengthen your lifespan, according to a recent study published in the American Journal of Preventive Medicine. Researchers found that adults over 50 who volunteered at least two hours a week had lower rates of mortality six years later than those who didn’t volunteer.

Tips for building a volunteering habit

Most people—seriously, a whopping 93%!—feel happier after volunteering, suggests a 2017 survey by United Healthcare. And for best results all around, consider making it a regular thing.

“The benefits should be long-lasting if you can create a habitual approach,” says Stephen G. Post, PhD, founding director of the Center for Medical Humanities, Compassionate Care, and Bioethics at Stony Brook University, and author of Why Good Things Happen to Good People. The goal: “to make this a part of who you are so it becomes a dependable quality in your life,” Dr. Post says.

Try these two expert tips for creating a helping habit:

And P.S.: If you ever find yourself on the flip side of the coin and need a helping hand yourself, know that asking for support is not a sign of weakness. Humans have a natural tendency to be giving toward one another—even when a kind act comes at their own expense, a 2020 study of 709 people concluded. It’s OK to request an assist. Give yourself credit for having the self-knowledge and resourcefulness to do so.

The upshot: Is volunteering good for health?

A growing body of evidence suggests that helping others in a spirit of collective good could enrich your personal wellbeing—especially if you lend support regularly. “The effects of doing one good deed will wear off, but then being in a positive state might encourage us to do it again,” Dr. Aknin says. “In turn, this can benefit you and everyone around you.”

Laurel Leicht is a Brooklyn-based writer and editor. She’s covered health, fitness, and nutrition for many magazines and websites.

Today! Get 50% off + free Kitchen Essentials Kit with code TREAT