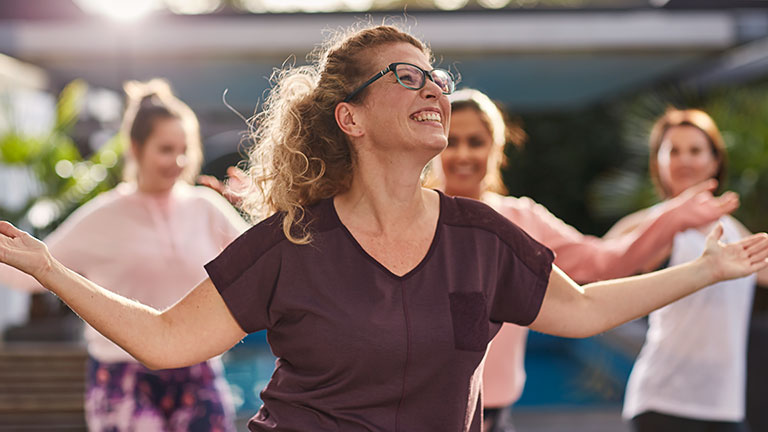 Know Before You Go: Zumba Class

About to take your first Zumba® class? Here’s what to expect.
By Alyssa Shaffer

Aficionados don’t think of Zumba as a workout—it’s more like going to a party where you happen to burn a load of calories while having a ton of fun. “Zumba is like exercise in disguise,” says instructor Michele Bastos, the U.S. regional group fitness manager for Crunch Fitness. It’s also a worldwide phenomenon, with classes now offered in 180 countries and with more than 15 million participants dancing through the workout each year. “For one hour you can just walk in and forget about everything else going on!” Bastos says. Here’s the scoop on this ever-popular dance workout.

Get situated. Find a spot where you can see the instructor, even if it’s toward the back. Most Zumba teachers are taught to use non-verbal cues, meaning there’s a lot of gesturing rather than someone telling you, “turn left” or “step right.” “We want people to really feel the music rather than listening for instructions,” says Laura Wagner, a Zumba instructor in New York City. “You’ll be more engaged and have a lot more fun.”

Leave anxiety at the door. Don’t worry if you have two left feet: “If you can walk, you can dance!” Bastos says. “The beauty of the class is that the choreography is very easy to follow, so anyone can do it.” You don’t have to worry about memorizing a ton of steps or sequences—most of the dances repeat the same basic movements each song, so after a few times, you’ll get it down pat.

Lots of energy. Zumba routines feature aerobic/fitness interval training with a combination of fast and slow rhythms that tone and sculpt the body. “You’re going the whole time,” Wagner says. “The goal is to get your heart rate up but in a way that you can keep at it for a full hour.”

Athletic shoes. No dance pumps here: Zumba is still at heart a workout, which means you need the appropriate footwear. Look for an athletic shoe that offers ankle support since you’ll be doing a lot of turning and pivoting. “There will be lots of boom-boom shaking and shimmying as well as a combination of high- and low-impact moves,” Bastos says, “and the use of athletic shoes will help with absorbing impact and overall support.”

Workout clothes. Something about the upbeat nature of the class makes students want to wear bright, happy hues, Wagner says. Just be sure whatever you’re wearing can help wick away the sweat that comes from moving your feet—and the rest of you—to the beat.

A world beat. The classes feature a fusion of Latin and international music rhythms, and you’ll find moves from dance styles like cumbia, merengue, salsa, samba, and soca, plus belly dancing, African and Indian dance styles (such as bhangra), hip-hop dance, and more. “We bring music from all different parts of the world together under the same roof,” says Wagner.

A variety of options. The original Zumba class is still the most popular but since its inception in 2001 year, there have been lots of Zumba spinoffs—including Zumba Step, using the step platform, Zumba Toning, with an emphasis on strength-training, and Aqua Zumba, done in the pool, among others. There are even special Zumba classes for older adults, kids, and for babies and their caregivers.

An energetic crowd. Classes are often packed with students of all shapes, sizes, and ages. Some like to sing out loud, others find themselves wrapped up in the rhythm. Zumba students should give themselves enough space to move around safely, Bastos says. “If you can reach both arms out to the side without touching your neighbor, then you are good to go,” she says. “Go with an open mind and an open heart,” Bastos adds, “and you’re guaranteed to walk out of the room smiling.”

RELATED: The Body Benefits of Zumba®

Get 50% off + free Kitchen Essentials Kit!