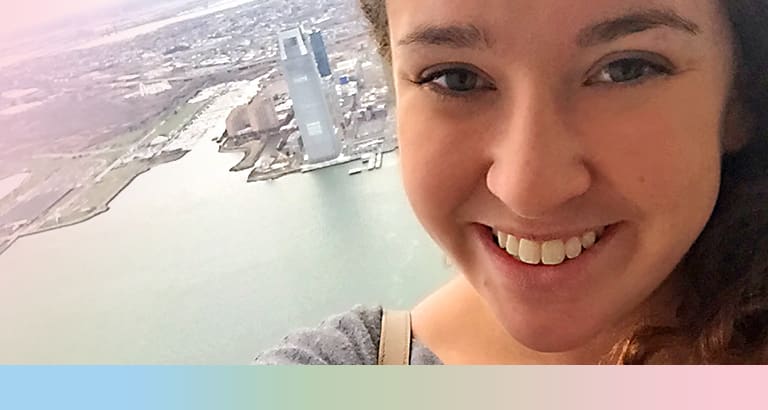 Sharing her story of abuse on Connect created a tidal wave of support.
As told to Katerina Savvides

*People following the WW program can expect to lose 1-2 pounds/week. Lauren lost weight on a prior program and is continuing on myWW™.

I was in an awful relationship. He was abusing me. I was beaten. I was raped. I was pretty much degraded all around, and you get to the point where you really believe that’s who you are and that’s what life has in store for you. That’s when I started cutting and I was in and out of hospitals. I was diagnosed with severe depression. I found the right medication, and I left the relationship.

As I started getting my life back together and thinking about what I wanted from life, I decided to take a year off from college. I finished my junior year then started working in retail. I went to a party with two guy friends, colleagues, who said they would look out for me because I wasn’t a big partier. I trusted them. I thought these guys were my friends. They took advantage of me. They got me so drunk—there are still parts of that night that I don’t remember. I do remember the ride home. One was driving and the other one raped me.

When I went back to work, I kept my mouth shut and my head down. I thought it was my fault. You get trashed and it’s your fault. The one who raped me sent me a text and said not to say anything. It was my word against his, and the guy in the car was on his side. He’d been at this job longer. He knew everybody. He actually bragged about the fact that he slept with me. My name was slandered at work.

When I quit, I told my employer that I was quitting because I needed to go back to school. They sent me a survey. I did tell them that a co-worker raped me. And it took them about a month and a half to finally reach out to me. I got a call from headquarters, and they asked for names. I provided the names and explained the situation and she told me to press charges. But I was going to be a teacher. It could turn into, “I was drunk, and he was drunk.” I couldn’t run the risk of having any charges brought up against me. It was something I had to let go of. It was what it was.

I sat down and figured out what I wanted in my life. A switch kicked on. I had one year left of college and I had every intention of finishing, which I did.

At 23, I joined WW with my mom and grandmother. I came to the belief that the best revenge is becoming a better person for yourself. I had gained a crazy amount of weight on medications.

But my life and how I looked was something I could control.

WW became my second family. When I was going through my years of depression from the sexual abuse, I felt utterly alone. But with Connect, I felt supported. People responded in a positive way. It was so fulfilling. When I started reading other people’s stories, I thought, maybe some day I need to share mine. So I went out on a limb. I posted that I was forgiving my abusers for what they did to me. I got 1,000 “likes.” That was empowering! I was moved to tears just knowing that my own story was inspiring to others.

I never want someone who is going through a hard time to do it alone. The more I talk about my story, the more I tell others that they are not alone, then maybe they can hear that and move on.

The best thing you can do is to know that it’s not your fault. To really understand that it is OK to talk about it and to get the help you need. When it comes to being raped, the emphasis is on keeping quiet. But you can have a voice, and you can say something about it.

If you or someone you know is a victim of sexual assault, click here for resources.