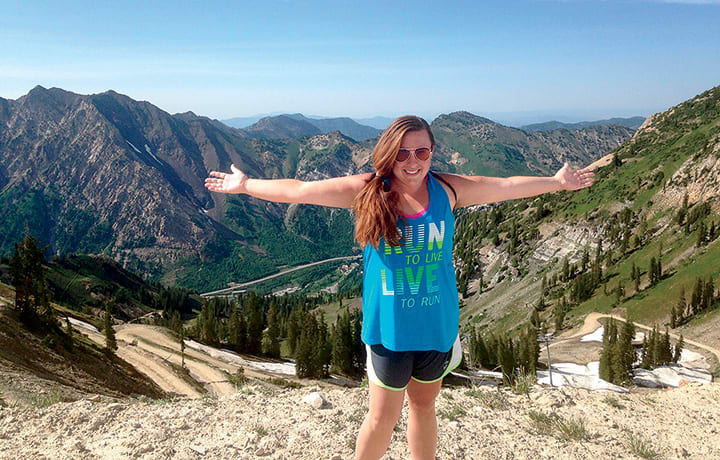 While traveling, one writer learned the difference between being alone and being lonely.
By Kristen Putch

As I waited at the Enterprise lot of the Salt Lake City airport, a bright yellow Chevy Camaro convertible wheeled up. I laughed, wondering which of my fellow renters had chosen such an outlandish car. The driver got out and said, “Miss Putch, your vehicle is ready.” “But I reserved a standard sedan,” I said. “We’re overbooked. Do you want the car or not?” “Um,” I began, then was stopped by a vision of myself flying down the highway, the wind in my hair. “OK, I’ll take it. But you’ll have to show me how to work the top.”

The Camaro was brand-new—just 500 miles on the odometer— and I was about to take it on a 10-day, 2,000-mile road trip through Idaho, Wyoming, Colorado, and Utah…by myself. And to think that until now, this girl from rural upstate New York had never been farther west than Chicago.

MUST READ: What Happens When You Travel by Yourself

It’s not that I didn’t want to explore new places; I hadn’t had the opportunity. Three weeks ago, I’d been working at a small nonprofit in Maryland. One morning, a coworker announced that she was taking a one-year sabbatical to Australia.

And just like that, I’d given notice—a risky move on my part, since I had no plan for what to do next or how I’d make a living. Then again, I was in my late 20s with no spouse, kids, house, or pets. If not now, when?

I was in Salt Lake City a week and a half ahead of my best friend, Steph, who’d asked me to join her at a conference there. I’d decided to use my newfound free time to check out the American West. While I’d known I’d be traveling solo, until I rolled, top-down, out of the Enterprise lot, the reality hadn’t fully hit me. I felt a small surge of panic: No one to eat with, no one to snap photos of me amid the scenery, no one to share the driving.

Since it would be just the Camaro and me, I decided to name her. Henceforth, she was Carrie the Camaro, a nod to Carrie Fisher, who’d always inspired me with her fierce determination to blaze her own path.

As I merged onto I-15 North, toward Idaho, and got my first glimpse of snow-topped mountains, my fears subsided. Three hours later, Carrie and I made our first stop, at the Twin Falls Visitor Center in Idaho. When I got out of the car to stretch, an elderly gentleman in a Chevy Tahoe called out, “Really nice wheels!” I thanked him, and it dawned on me that driving Carrie was going to make the trip more fun. Indeed, I soon discovered that I couldn’t have come up with a better conversation starter if I’d tried.

The next nine days were an ever-changing montage of sights, sounds, and tastes (tip for foodies: The best milk shake in America is available at Moon’s Kitchen Cafe in Boise). I ran my fingers through the lava field at Craters of the Moon National Monument and Preserve in Idaho. I hiked around Jenny Lake in Grand Teton National Park and watched the geysers erupt at Yellowstone. In Denver, my only major-city stop, I stood on the Mile-High marker at the gold-domed state Capitol. (To my surprise, instead of providing a fix of urban hustle and bustle, the city left me craving the white noise of tires on asphalt.) Back in Utah, I marveled at the ancient arches and stonescapes near Moab.

Most days, I covered at least 200 miles—sometimes up and down winding mountain roads, just as often on flat, desolate highways where I would have sworn I could see for 100 miles. Hours might pass before I’d see another car or a town (a term I use loosely since many were little more than a gas station and a rundown diner); even radio stations were scarce. Mostly, I just enjoyed the wind in my hair and the sun on my shoulders.

And I learned an important distinction: the one between being alone and being lonely, a feeling I never once experienced as I racked up those 2,000 miles. On the contrary, I found I liked my own company, and the solitude gave me a chance to sort through my thoughts and anxieties about my future.

When I returned Carrie, she was covered in bugs and dirt, but my mind had never been clearer. Waiting for Steph at baggage claim, I waved like a lunatic and practically pounced on her when she was near enough to hug. She listened as I regaled her with stories of all I’d seen and done, then praised my “bravery” at taking such a trip alone. The word struck a chord, and I realized I was proud of myself. And with that realization came another: It didn’t matter what awaited me back East. I knew I could handle it.