Skip to main contentSkip to footer
Start today
Start today
Success Stories
James: "I’m a fit, confident new man at 58!"
My blood pressure is now at a healthy level so I've dropped the medication, plus I'm now classed as no longer at risk from chronic kidney disease 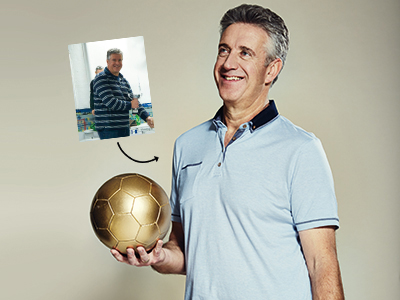 Health issues James loves his five-a-side footie, but a health scare blew the whistle on his playing days until he lost 3st and regained his fitness. Now the Gold Member is leaving younger players for dust.

Doctors diagnosis James always thought he was in great shape. Okay, so he wasn't as fast as he used to be, but for a man in his 50s that seemed part of the deal. And while his clothes were a little snugger every year, health problems were the last thing on his mind – until a routine check five years ago. 'My doctor diagnosed high blood pressure and suggested excess weight was to blame – and it was a huge surprise,' says James. 'I thought that medication to control blood pressure was something inactive men with big bellies who lived on beer and chips took, not active men who have always played sport weekly, like me.'

But that was only the start of James's problems. After undergoing a hernia operation, he couldn't exercise for six months – and the weight piled on. Then a routine blood test revealed he was suffering from chronic kidney disease, a condition linked to excess weight gain that can cause kidney failure if it's left untreated.

'I couldn't believe it,' says James. 'I'm not one of those people who lie in bed at night thinking the worst, but niggling worries about my health were suddenly on my mind. 'I felt heavy, sweaty and out of breath just walking down the street. And it was so frustrating.

'After I'd recovered from the hernia operation, my doctor advised me to start exercising again to help shift the weight. But I was in a situation where I was too fat to get fit again and not fit enough to get the fat off!'

Reality check But James persevered and it was during his weekly five-a-side match with his friends that he had his next big wake-up call. 'A guy joined the team who I thought looked huge and out of shape. Later that evening, over a pint at the pub, I discovered he was a stone lighter than me. I thought, "If he's fat, what does that make me?!" It was then I realised I had to stop kidding myself I was some fit sporty guy when I clearly wasn't anymore.'

So in January 2014, on a referral from his GP, James joined WW. 'I enjoy challenges, and this was one I wasn't going to fail,' he says. 'I chose a local WW Workshop that fitted in with my work and social life and committed myself to getting into shape.' James lost a huge 8½lb in the first three weeks, and then a steady two pounds every week after that.

The benefits started showing... He felt fitter and more energetic, meaning he could do even more of the sport he loved. 'I played a game of squash, five-a-side football and golf weekly, but I also squeezed more exercise into my daily life,' he says. 'Just going for a walk in my lunch break, taking the stairs instead of the lift and choosing car parking spaces further away made a huge difference.'

Six months after his first Workshop, James hit his Goal Weight of 15st, which had a dramatic effect on his health. 'My blood pressure's now at healthy levels so I've dropped the medication, plus I'm now classed as no longer at risk from chronic kidney disease,' he says.

But it's not just James's health that's been recharged. 'I've never said it out loud before, but I am more confident,' he says. 'I would never have thought about doing something like this photo shoot before – I'd have been nervous the whole way here, worried that the clothes wouldn't fit. Yeah, it does make you more confident – I have even noticed that I walk confidently and others have noticed, too. Now I'm fit, I'm healthy, and I feel like a new man.'

1. Meetings are a great support: 'I know some people might be tempted to just go for the Wellness Check-in and leave before the chat, but I'm a firm believer that there's strength in numbers. It was great to hear what other people were doing, and also motivate others by sharing my own experiences.'

2. I'm lighter than I was 30 years ago: 'I used to travel to Switzerland a lot when I was first married, 32 years ago. I would weigh my suitcase by weighing myself first – I was exactly 100kg, so I knew what my suitcase weighed by picking it up while I was on the scales. I'm now lighter than that!

3. People see me differently now, too: When I play five-a-side on a Friday night, I can run past my teammates now. Recently a young lad I was playing football against said he was amazed I'd caught up with him.