How Tania And Ryan Set A Healthy Example

Maintaining healthy habits is the best lesson these members can teach their children.

*People following the WW program can expect to lose 1-2 pounds/week. Tania & Ryan lost weight on a prior program and is continuing on PersonalPoints™. Watch Tania and Ryan find the time in their busy schedule for healthy habits in the video below.

In Tania and Ryan’s words:
Tania: Ryan and I have been together since our late teens. We got married young, and we connected through traveling, eating good food, and drinking good wine. I was gaining weight consistently throughout our marriage. After I had our second baby, I was frustrated that I couldn’t fit into my clothes anymore, so I decided to join WW as a Digital member.

Ryan: Tania joined on her own at first. For about six months, I noticed that she was having a lot of success — to the point where I’d wake up and notice that this was a new person. I looked at myself in the mirror and I knew I needed to make a change so that Tania, the kids, and I could have a healthy future. Without telling Tania, I signed up for WW Digital, too.

T: When he told me that he joined, that made me so happy. It’s fun being on this journey together.

Our new routine
T: What I love most about the program is that I don’t have to cut out any foods forever. I still love cheese, I still love wine, and of course, I still love dessert. So we enjoy them in moderation, and we’ve also found substitutions for the foods we love.

R: Every Friday is pizza night in our house. Instead of ordering a stuffed-crust pie, we make our own at home, and the kids would join in, too. First, we make two-ingredient pizza dough using Greek yogurt and self-rising flour — a recipe we found on Connect. Then we add the sauce, cheese, and toppings; the kids help us make the pizzas, too.

Restaurant redo
R: We’re not very good cooks so we go out to dinner often. In Southern California, there’s so many great Mexican restaurants. We love to head to one in Newport Beach. First, we’ll take the ferry over to Balboa island for a walk — maybe a ride on the ferris wheel — and then we’ll head to dinner.

T: I can usually always find a chicken, steak, or fish dish wherever I go. I’ll either grab a couple of tacos or chicken or steak fajitas with veggies. I’ll skip the chips and guacamole.

R: I love having fresh ceviche with lime juice on top, and a couple of tacos.

T: And wine: We each have a glass. 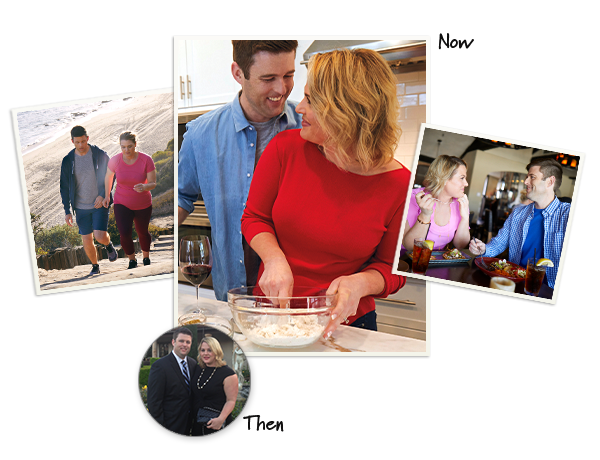 An active family
T: Before, we used to have a lot of TV-time in our house. Now, after we eat dinner or over the weekends, we’ll go outside more. Ryan and our 6 year old Liam will ride their bikes and I will run along with them and push Bennett, our 2 year old, in the jogging stroller. There are lots of good trails around us. We usually end up at a park and play there.

R: Sometimes, we’ll go to the beach in Newport. The kids love playing in the sand and we love getting in our steps as a family. We try to get at least 10,000 steps each day over the weekend.

Getting prepared
T: On Sundays, we run our errands. First, we’ll head to Trader Joe’s or Target to pick up items for the week. Then, when we get home, we’ll start meal prep. We assemble and bag toasted Eng­lish muffins with light cheese, a scrambled egg, and seared Canadian bacon, and cook chicken in the Instant Pot so it’s ready to use in tacos or chili for dinners.

Setting a healthy example
T: Our sons are really healthy eaters, and I think that comes from watching us. I’ve never seen anyone love broccoli as much as they do!

R: We’re committed to showing Liam and Bennett a healthy lifestyle. Our hope is that it will come natural to them as adults. We want these habits to stick.