This med school student took advantage of her strict schedule to make healthy living part of her routine.

*People following the WW program can expect to lose 1-2 pounds/week. Priyanka lost weight on a prior program and is continuing on PersonalPoints™.

In Priyanka’s words:
I was always bigger than most of my friends, but my weight problem really hit while I was a student at the University of Texas at Austin. My roommate and I would try to “be healthy” by cooking meals at home instead of getting takeout, but we’d end up making huge portions of pasta, which completely canceled out any good that we were doing. After seeing photos from a family vacation, I felt horrible. I couldn’t believe that I had let myself get that out of control. It was time to make a change, so I joined WW as a Digital member during my senior year of college. I reached my goal before I got to med school the next year!

Finding the time
Being a student was actually very helpful when starting the program. I started planning my week of meals, school assignments, and workouts every Sunday, which made life so much easier. And having the tools right on my phone was so helpful. My cooking skills have really improved since joining — I love trying different WW recipes. I also joined a boot camp class that was really tough, but it kept me motivated.

Eating out smarts
As a student, I eat out a lot. I’ve become better at eyeballing portions, so I know that no matter where I go, I can make healthy choices. I’ve also learned some helpful tricks like ordering a big glass of water or requesting a to-go box before my food comes. A lot of restaurant portions should actually be two meals — I can’t believe the amount I used to eat. One of the foods that shocked me the most was sushi, which I love. Now, rather than getting the stuff that’s dipped in spicy mayo or tempura, I’ll get the fish only. If I really want the mayo, I’ll get it on the side; it’s delicious, but I don’t need my sushi smothered in it anymore.

A massive achievement
Last summer, I went to Peru with some med school friends, and we hiked up a mountain to Machu Picchu. As we were climbing, I kept telling them what a big deal it was for me. It’s something I never thought I’d get to do. In the past, I had been scared to travel or try new experiences that were more physically demanding, which made me feel very limited. I’m not sure my friends really understood how I felt during that trip since they’ve only known me at this size. They’re so supportive of me, but it’s hard for them to understand how I’m really feeling when they haven’t been there themselves. That’s where 24/7 Expert Chat really helps me. I still have moments when I’m struggling, and it’s great to talk to a WW Coach who can relate. 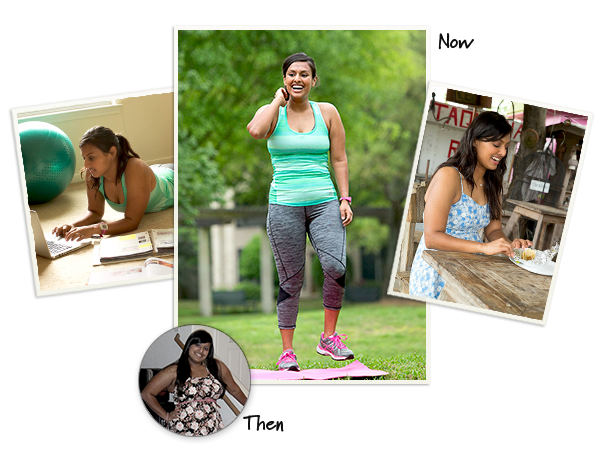 How Priyanka’s success with WW has improved her life

Setting an example
I’m in medical school so I get to speak with patients quite often. I used to feel like a hypocrite when discussing diabetes or hypertension with them since I was at risk, too, and not doing anything about it. Now that I’m a healthy weight, I feel more credible. It’s not just one of those things doctors say, “You have to lose weight.” Instead, I’m able to tell them, “Hey, this is possible. Look at me. Here’s what I did to lose weight.”

A whole new me
Honestly, sometimes I look in the mirror and I really can’t believe what I see. Going shopping is a surreal experience. I remember trying on skirts in one of my favorite stores for the first time after hitting goal and needing to grab a size Small. It still doesn’t seem like it’s actually going to fit, but every time I put it on, it’s the perfect size. I have to remember that this is me — this is who I am now. And it’s a fantastic feeling.

WW Taught This Teacher to Put His Health First

“Honoring my heritage made me a healthier eater”

How a “Total Dessert Queen” Keeps Up Her Healthy Habits