After gaining and losing for years, this mom finally crossed the finish line to a healthier, more fulfilling lifestyle.

*People following the WW program can expect to lose 1-2 pounds/week. Kelly lost weight on a prior program and is continuing on PersonalPoints™. Watch her journey to becoming more active in California.

In Kelly’s words:
I joined WW in January 2015. I had started at the beginning of the New Year many times before; I’d always lose some weight, but then gain it back. This time around, I was doing well on the program, but when the Super Bowl aired, a shocking reality hit me: I weighed the same as some of the players! That’s when I knew I had to get serious. I decided to embrace the program as a lifestyle, not a diet. My goal was to make WW a part of who I am as a person, and that has made all the difference!

Her steps to a healthy life

First changes
From the start, I realized that portion control and tracking were key. I noticed that I had always been eating healthy foods, just too much of them! And I hadn’t comprehended that a little snack here or there, or dessert after dinner, really had a significant impact on the amount of my daily food intake. But they made a difference. When I first started using a food scale, I didn’t think I could be satisfied with the serving amounts. To my surprise, I was — and that convinced me that a healthy lifestyle could become second nature to me.

Becoming an “outside mom”
My son once told me that I wasn’t an ‘outside mom.’ That made me sad. We live in beautiful Sonoma, California, where the weather is great and there are a lot of regional parks and gorgeous vineyards just walking distance from my house! The beauty of the area helped motivate me to get outside every night after work. I started walking on country paths every day, and slowly I began running. I found it calmed me down and allowed me to get myself settled for the next day, while fitting in exercise at the same time! And even today, I walk the same country path through the vineyards four to six times a week. I never get tired of it. Now, I’m definitely an ‘outside mom.’ My family hikes together. An intense trek is calming. Since I’ve taken up a fit lifestyle, I can pretty much handle any issue because I’m in control. 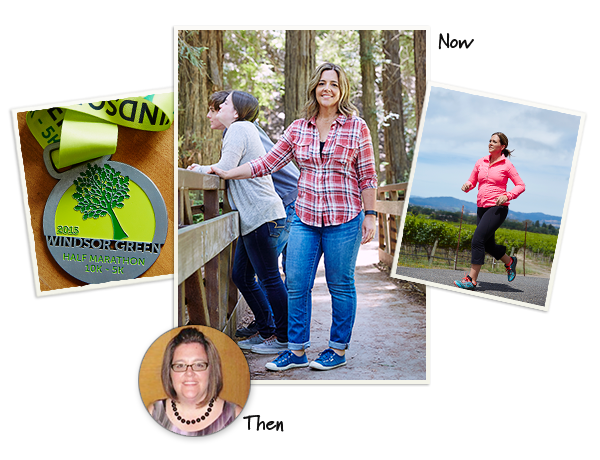 How Kelly’s success with WW has improved her life

A new identity
I used to say, ‘I can’t run.’ Now, running is a part of who I am. I even completed three half-marathons! The first one was definitely a big challenge, but I just told myself I could be a runner if I tried hard enough. And pushing through the struggle and seeing improvement taught me a lesson that I believe helped me get to goal: The more I stick to something, the easier it gets. The more determined I was to be a runner, the more it became a part of my identity.

Mixing it up
Doing the same activity can get boring for me, so I try some new things every few months. Currently, I’m loving yoga! I started doing yoga as a core-strengthening class to help me be a more efficient runner — but I ended up getting much more from it. As I always say, yoga fixes me. I found that a lot of the meditative practices that happen in a yoga class help a lot with stress and the business of life. In that hour-long class, everything else just falls away and I can forget all my worries. In the end, that has helped me stay on course — taking care of the hard stuff helps me make better choices every day.