The death of her young daughter was a blow Heidi thought she’d never recover from. Here’s how she learned to celebrate her child’s memory.

*People following the WW program can expect to lose 1-2 pounds/week. Heidi lost weight on a prior program and is continuing on WeightWatchers. Watch Heidi's journey of finding joy after years of grieving.

In Heidi’s words:
When my daughter, Dena, was 14 months old, she was diagnosed with juvenile rheumatoid arthritis. Over the years, she was in and out of the hospital. Her veins were suffering from her treatments, so we had a port put in. One night when she was 13, she said she wasn’t feeling well. In the morning, she collapsed. I thought she might have the flu, but when we arrived at the hospital, we learned that her port had become infected. It was too late; our girl died of sepsis. My husband and I were blindsided by her death. My son, who was only 15, felt helpless. And guilt overtook me. I blamed myself; I thought, “I should’ve known it was the port.” For two years, I saw only black.

Letting go of guilt
I checked out as a mom for a while. My son was struggling, but he really didn’t want to talk about it. Then I realized I had to decide between taking care of my child on Earth or my child in heaven. Today, I know it wasn’t a choice at all. I had a child here whom I needed to raise to be a strong young man. Though it felt as if a huge part of me had died, my faith in God pulled me through. I turned to support groups, to friends at our church, to family members. I felt guilty for years, but I learned I had to stop questioning why this happened. I started to focus on how I could help other trauma survivors.

Back to the basics
I had joined WW in 1997 and became a Lifetime member. I had great success on the program, but I stopped going to the WW Workshops. After Dena passed away, everything snowballed, and I gained close to 50 pounds from emotional eating. In 2014, I decided to rejoin WW. I didn’t fit into my clothes anymore, and I wasn’t getting any younger. A year later, Connect debuted. At first, I was a little intimidated to post anything. But I realized I have so much to share: I’ve learned a lot about healthy habits and life over the years. My handle is @heavens13 — it’s where I believe Dena is, and how old she was when she passed.

Connect superstar
My first post on Connect was a collage of eight photos of my transformation. It makes me emotional to think that, today, more than 118,000 people want to hear what I have to say. I’m not sure how so many people became interested in my journey! I post daily, usually my food choices, activity, or mantras. I’ll write about Dena once in a while. The comments I receive inspire me — others on Connect have lost their children, too. We’ve all felt the same heartbreak, and we help each other remain strong. 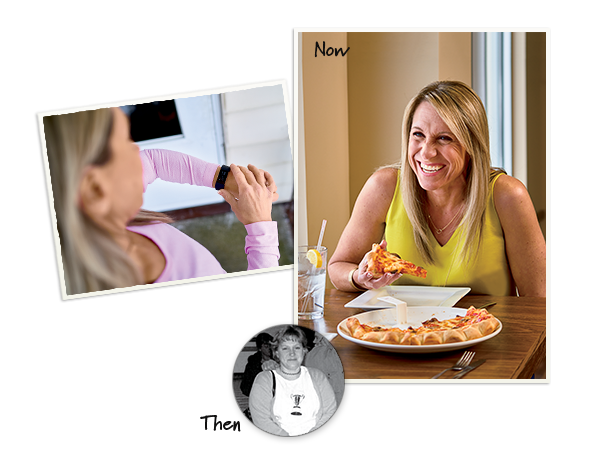 How Heidi’s success with WW has improved her life

Step lively
A few of my Connect friends and I created a group called the Lipsmackers. We compete against each other in weekly challenges. For one of our most impressive competitions, the goal was to get in 100,000 steps in 24 hours (yes, I know that’s insane)! There were 20 of us, and 6 of us surpassed the goal! In one day, I did 102,000 steps, which was around 43 miles. It was fun, but it was rough — I was feeling it in my legs the next day.

Feeling joyful again
In 2012, my husband and I decided to quit smoking cold turkey. I’d become a slave to the habit; I was sick of it. So we got gum and an inhaler to help with the withdrawal, and never looked back. I put on some weight, but once I joined WW in 2014, I took it all off and then some! Today, my life has joy that I never thought I could recover. I’m proud of my son for bouncing back and finding happiness with his loving wife. I’m proud of my husband and myself for supporting each other through tragedy. I wish my daughter were here, but I know she’s watching over me. She’s my angel.