*People following the WW program can expect to lose 1-2 pounds/week. Debbie, WW Coach, lost weight on a prior program and is continuing on WeightWatchers.

At the age of 49, I’d been overweight for so long that I’d officially given up on myself. Weighing in over 300 pounds, I figured I was meant to be this way.

It all started in my early 20s a few months after I gave birth to my daughter when my boyfriend left me for a younger, thinner woman. Between working full-time and taking care of our baby, I turned to foods like ice cream and cookies for solace.

A few years later when I met my now-husband, we bonded over our shared passion for eating: We’d choose foods for taste and convenience—like bagels or jumbo muffins—and I’d eat two or three in one sitting. When we struggled with money, I’d pick up dinner at the drive-thru and buy one meal to eat in the car and a second to eat at home.

Over time, my weight ballooned. It contributed to acid reflux and sleep apnea, a condition where you unexpectedly stop breathing when you sleep.

Although I’d resigned to my weight, I never felt attractive—I wanted to be invisible. Because I worried endlessly about fitting into chairs and restaurant booths, I began to avoid social situations completely.

In October 2010, I was diagnosed with and medicated for high blood pressure, diabetes, and high cholesterol—a host of conditions my mom had also suffered from due to her weight. Although I’d told myself I’d never get to that point, there I was.

My only hope to improve my health, my doctor said, was gastric bypass surgery, a procedure that requires a change in eating habits. Convinced I’d fail and gain the weight back, I opted out.

Two months later, a friend asked me to join WW with her. I gave in with no intention of sticking to the program since I didn’t think it would work.

During WW Workshops, we’d discuss recipes, food swaps, and snack ideas that stuck with me throughout each week. Although I told myself I’d go to weekly WW Workshops for one month only, at the end of the first month, I continued. My motivation: the people. The members made me feel accountable and emotionally supported.

At first, I set small behavioral goals like measuring my food or going to the grocery store, and I achieved them one by one. That said, I didn’t cut out the foods I loved; I saved my Weeklies (e.g., extra WeightWatchers) for ice cream on the weekends and made lasagna using butternut squash instead of meat.

RELATED: 19 veggie noodle recipes you'll like as much as regular pasta

What Debbie ate then vs. now

Eventually, I realized that I was actually enjoying the lifestyle I was building. After three months, I’d lost 35 pounds* and felt genuinely hopeful about my progress.

Pushing through the negativity

When I went back to the doctor who suggested I get surgery, I gushed about my success on WW. Instead of matching my excitement and beaming with pride, she said, “Debbie, you’re fooling yourself. You’re just going to gain it back like you did every other time.” I was devastated.

Before WW, I would’ve have coped by eating candy bars and pints of ice cream in front of the TV. But that didn’t happen this time. Instead, I went to my Workshop a few days later and shared what my doctor had said. The other members showered me with encouragement and pointed out how much I’d accomplished so far: I’d altered my lifestyle drastically.

Before WW, I wasn’t just sedentary: I hated going outside. So two months after this incident, about five months into my journey, I decided it was time to start moving more—that is, walking from my couch to my mailbox.

That was just the start of it. Next, I progressed to walking as far as my neighbor’s house, then mustered up the confidence to join a neighbor who was walking around the block. I kept pushing myself further in super small increments until two years later, I walked my first fun run. Seven years into my journey, I started running 5Ks.

My new approach to activity helped my family move more, too. Now, my husband and I will go for a 2-mile walk a few times a week. I’ll also recruit my son for walks, something I never wanted to do with him while he was growing up. To make up for that lost time, I play with my grandchildren or take them to the park—I’m the fun, active grandma I never thought I could be.

Healthy beyond the scale

Two years after starting WW, I reached my goal weight. But it gets better: I also became a part-time WW Coach—meaning I get to spend my days helping other people transform their own. 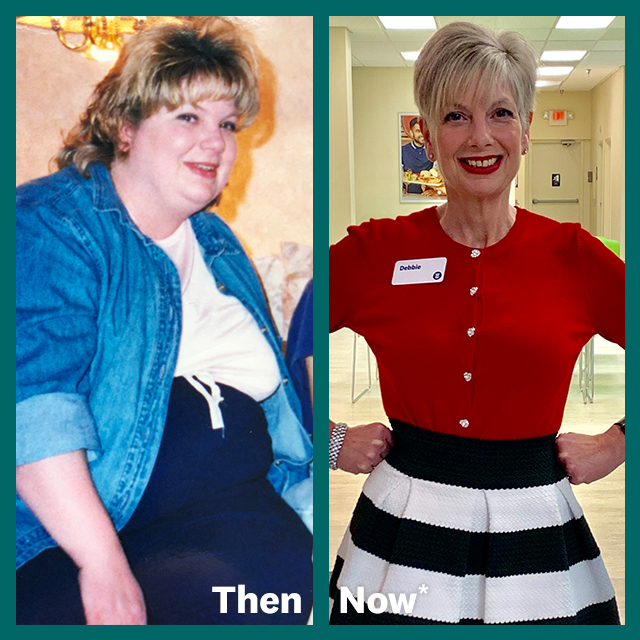 Now that I lead nine Workshops in Connecticut each week, I’m able to guide members through their own transformations. So many people have told me I’ve given them hope—a great feeling, particularly since I remember what it was like to feel defeated.

As my wellness journey has evolved, I’ve set my sights on two main goals: To continue living my life free of weight-related diseases and feeling strong. Today, I’m medication-free with a completely clean bill of health.

And as for building strength? I often think of the time I put on a pair of jeans, tucked in my shirt, and put on a belt about a year and a half into my journey. For the first time in a very long time, I looked in the mirror and felt like there was nothing wrong with what I saw. From that moment on, I wanted to go out and be seen.