When this member let go of her past, she stopped eating out of emotion and started living a life that is fuller than she ever imagined.

*People following the WW program can expect to lose 1-2 pounds/week. Brandy lost weight on a prior program and is continuing on PersonalPoints™. Watch Brandy’s journey of living her best life in Louisiana in the video below.

In Brandy’s words:
When my size 14 pants started cutting into my skin, I decided to join the program. It was December 30, 2014. I didn’t want to wait until the New Year to start getting healthy — losing weight wasn’t a resolution for me. I felt compelled to start immediately, even though I had a party to go to on New Year’s Eve. I live in Louisiana, so I knew there’d be a classic Cajun spread there — pralines, gumbo, and peach cobbler. But I ate before I went because I didn’t want those foods anyway. I was super excited to make a change that would last forever.

Healthy living in the South

Second time around
I had tried WW before and it worked for me. Once I lost the weight though, I thought I could do it on my own. I lost motivation and I slipped back into old habits. When I found a WW Studio near my home, I made a commitment to myself that I wouldn’t quit, I wouldn’t stop. And the WW Workshops helped me do that. Everyone at our Workshop is super supportive. We do a scavenger hunt at the grocery store and we get snack and meal ideas from there! Our WW Coach will set up a 5K that we can participate together. At the end of one 5K, we all did a “balloon release.” The balloons symbolized our weight — we’re releasing the weight, and it’s never coming back!

Living in Louisiana
As you can imagine, it’s very easy to eat unhealthy foods here in Louisiana. I work for the tourism board in Shreveport, so there’s often food and drinks involved in our line of work. Whether it’s shrimp po’boys for lunch, meat pies for dinner, and beignets for dessert, there are a lot of foods that don’t fit into my PersonalPoints allowance. But I’ve learned that healthy fruits and vegetables can be so delicious. There’s also such fresh seafood here on the Gulf Coast, and it tastes even better when it isn’t fried. I love to make a stir-fry with shrimp and vegetables like broccoli and carrots. And I’ll get pre-cut fruit at the store that’s ready for me to eat so there are no excuses. And every now and then, I save up my PersonalPoints for traditional Lousiana fare! 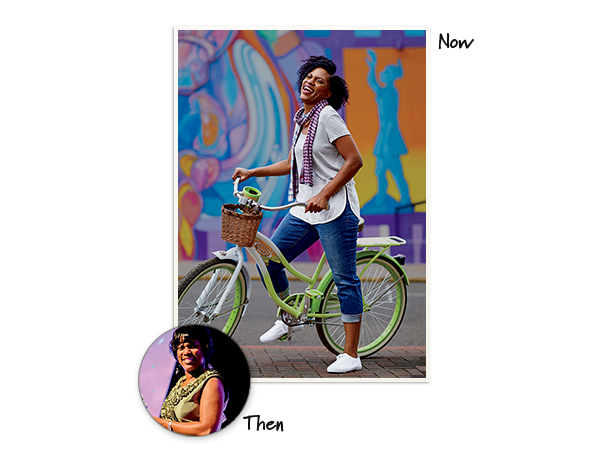 How Brandy’s success with WW has improved her life

Making peace with the past
Growing up, we were poor. We moved around a lot, and my childhood was very unstable. You gain lots of baggage from living in the ghettos, and in poverty, and because of that, I ate. That’s how I would feel better. When I started the program, I searched for the root cause of my emotional eating. Figuring out that it was painful memories from my childhood helped me start the healing process. I’ve learned to let go of the past, and I’ve made peace with it.

Do what you love
I bought myself a bike — a lime green one! — and I love to ride it. I feel so carefree; I feel like a kid again when I’m riding. I also go to Zumba class, and I love to use the kettlebell. Working out first thing in the morning helps me set the tone for the entire day. I’ve learned that I’m important; that I deserve to take care of myself. I have every reason to say that I’m worth it. I’m giving myself a fighting chance to live a long life.