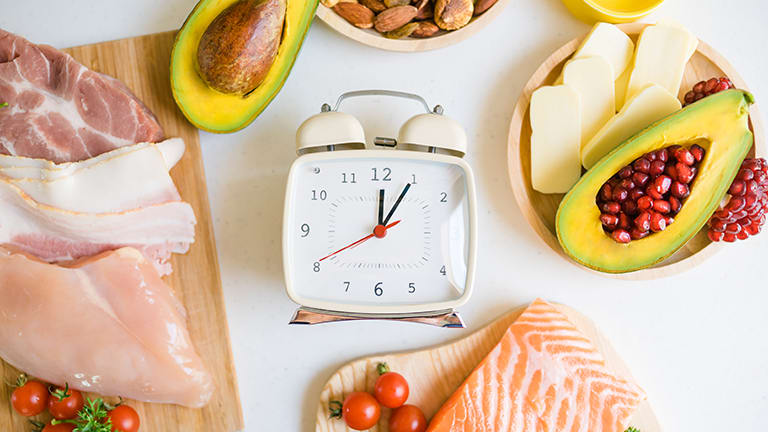 Can 16/8 fasting really help you achieve your weight loss goals? Read on to learn how this form of intermittent fasting works—and if it’s right for you.
By Alice Oglethorpe

Even if you haven’t tried 16/8 fasting, there’s a good chance you’ve heard of this trendy eating approach. Many fans swear by its supposed weight-loss powers: The idea is that you can eat whatever you want and still drop pounds—as long as you squeeze all your meals and snacks into an 8-hour window every day. For the day’s remaining 16 hours, you purposefully go without food. This recurring practice is a form of intermittent fasting.

Despite the buzz surrounding 16/8—sometimes called 16:8 fasting, or the eight-hour diet—intermittent fasting has been around in various forms for centuries. The 16/8 method is just one example of time-restricted eating, which confines calorie intake to certain hours. Other intermittent fasting approaches alternate entire days of fasting (or very little food intake) with days of normal eating; the 5:2 diet is a popular example. Many people fast for spiritual and religious reasons, as well.

Along with weight loss, some proponents of the 16/8 method point to potential health perks such as improved blood sugar and healthier cholesterol levels. But can swearing off calories for 16 hours a day actually be healthy, and how do you know if it’s the right approach for you? Keep reading for a breakdown of how 16/8 fasting works, an evidence-based look at the pros, cons, and unresolved questions concerning this method, and expert advice for trying 16/8 intermittent fasting if you decide it makes sense for you.

What is 16/8 intermittent fasting?

The 16/8 intermittent fasting approach is super simple, which helps explain why the fad has taken off. All you have to do is pick an eight-hour block in which to consume all your meals, snacks, and caloric beverages each day. Use that time to eat anything you like. Once the eight hours are up, you switch gears and swear off all calories for a fasting interval of 16 hours. (Pro tip: Most 16/8 adherents spend at least some of that stretch sleeping.) And that's, well, pretty much it. The diet generally doesn’t require following a meal plan, counting calories, restricting specific foods, or increasing intake of specific foods.

The basic goal is to stick with the same eight-hour eating window each day—from 10 a.m. to 6 p.m., for instance. Predictable eating patterns, whether or not they include periods of fasting, may help support good health, notes Dr. Felicia Steger, PhD, RD, a postdoctoral scholar in the department of nutrition sciences at University of Alabama at Birmingham.

“We study how fasting and eating at the same time every day helps you get aligned with your circadian rhythms,” Dr. Steger says. “Your circadian rhythms are anticipatory; they try to predict patterns of behavior and prepare the body for those activities. So if you eat at the same times every day, your body will better prepare for that eating window”—for example, by teeing up the hormone insulin to help move incoming blood sugar (glucose) into cells for energy.

On the health front, some early research suggests that intermittent fasting is correlated with healthy changes in cholesterol, blood pressure, inflammation, and—yup—glucose response. Just note that such findings are far from definitive at this point, and researchers are still working to fully understand how 16/8 fasting might support human health.

Before we dive into the potential benefits of 16/8 intermittent fasting, let’s take a closer look at what researchers have explored so far about the underlying mechanisms that may be at play.

When a person skips food for an extended interval, the body’s use of energy actually changes, explains Dr. Mark Mattson, PhD, a neuroscientist with Johns Hopkins Medicine who studies intermittent fasting.

Someone who eats regularly throughout their waking hours is constantly replenishing their liver’s stash of glycogen, a stored form of glucose energy derived from carbs, he continues. When that supply isn’t restocked, however, the body depletes glycogen fairly quickly. “Those glycogen stores can get used up in about 10 hours if you’re fasting”—more quickly if you add in a workout, Dr. Mattson says.

Here’s where things get interesting: Once glycogen stores are used up, the body starts scrounging for an alternative source of energy. At that point, it begins breaking down stored fats into substances called ketones to get the job done.

This metabolic switch does more than meet the body’s immediate energy needs, Dr. Steger says. “In general, the switch from using glucose to ketones is a trigger point—it shifts your metabolism from focusing on storage and growth to being all about repair and replace,” she explains.

Indeed, in a large review of research on intermittent fasting published in the New England Journal of Medicine in 2019, Dr. Mattson spotlighted evidence suggesting that ketones act as potent signaling molecules that can affect cell and organ functions—for example, by regulating the expression and activity of certain proteins.

The 16/8 intermittent fasting approach shows promise for supporting some aspects of health, but any splashy claims of effortless weight loss or disease prevention are premature at best, experts tell WW. Most studies thus far have been small or conducted on animals; more research is needed to figure out the full effects of intermittent fasting, as well as optimal approaches. Here’s what science has to say about some hot topics so far.

To date, no published research has found that time restriction on its own can trigger accelerated weight loss in humans. But losing weight is possible if a smaller eating window happens to reduce your overall calorie intake—for instance, by moving midnight snacks out of bounds, says Cara Harbstreet, a registered dietitian and nutritionist based in Kansas City.

Findings so far are mixed on whether people naturally tend to eat less on a 16/8 eating schedule. A small pilot study in 2018, for example, recruited 23 adult volunteers with obesity and had them follow a 16/8 plan for 12 weeks without additional dietary restrictions. Subjects consumed 341 fewer calories per day on average and lost 3% of their body weight by the study’s end. On the other hand, 16/8 dieters in a more recent clinical trial showed no significant difference in calorie intake or weight loss when compared with people in a control group.

The current phase of research aims to compare intermittent time-restricted diets like 16/8 with continuous calorie-restricted weight-loss diets in controlled settings, Dr. Steger says. She expects to publish findings on that matter soon, noting that her preliminary results suggest that the two approaches do not yield major differences in weight loss. Time-restricted eating, however, may deliver an edge in fat loss.

As with other diets that tap the body’s glycogen stores for energy—such as the ketogenic diet in its early phase—it’s possible to shed a few pounds of water weight while following a 16/8 intermittent fasting plan. That’s because glycogen is bound with water in the body’s tissues. Just note that this form of weight loss is usually temporary, Harbstreet says.

In his research review, Dr. Mattson uncovered a correlation between intermittent fasting and improvements in multiple factors related to cardiovascular health, including blood pressure, resting heart rate, and cholesterol. One small study cited in the review, for example, looked at 19 people living with metabolic syndrome (a group of risk factors for conditions including heart disease). After 12 weeks of limiting themselves to a 10-hour eating window each day, volunteers were found to have significantly lower LDL (“bad”) cholesterol and improved blood pressure readings. Their long-term outcomes, however, were beyond the scope of the study.

Dr. Mattson’s review also suggests that intermittent fasting may improve insulin resistance, a condition that raises a person’s risk of developing type 2 diabetes by keeping too much sugar in the bloodstream. In a small study of 15 men at risk for type 2 diabetes, researchers had them eat their normal diet within a nine-hour window every day. After seven days, participants showed better glucose response after eating a meal. Again, though, file these findings under “promising but highly preliminary.” Says Dr. Steger, “I wouldn’t suggest that time-restricted eating improves diabetes risk factors given the currently available data, but we should have more soon.”

Some research shows that when people switch to an intermittent fasting approach, they could end up with reduced markers for systemic inflammation, according to Dr. Mattson. One study recruited 34 men who regularly engaged in resistance training and split them into two groups. Those who were assigned to eat in an eight-hour window every day had reduced inflammation markers compared to those who ate on a more extended schedule. As with other potential benefits of intermittent fasting, the reasons for the connection aren’t totally clear at this point.

A 16/8 fasting approach generally doesn’t limit or mandate specific foods—technically, you could munch on potato chips for eight hours and still be “following the plan.” As you might expect, however, no expert who spoke with WW actually recommended that strategy. Eating a balanced diet with plenty of nutritious whole foods is advisable for overall health, Harbstreet says. And given the time-restricted nature of 16/8 fasting, focusing on foods that satisfy your appetite and help keep hunger at bay is another goal to keep in mind. Here are some foods you want to put your plate if you are considering following a 16/8 fasting plan:

Limiting daily calorie intake to an eight-hour window does not pose serious health concerns for most healthy adults, Dr. Steger says. If you have an underlying health issue such as diabetes, if you are pregnant, or if you have a history of disordered eating, she recommends chatting with your doctor before trying a fasting regimen or making any major change to your diet.

And don’t forget that you might feel moody and hungry while your body gets used to fasting for long stretches (maybe warn your loved ones that you may not be very fun for a few weeks). In some cases, people report feeling nauseous or dizzy, or experiencing diarrhea or constipation.

Some unpleasant side effects can pop up when the body switches to using ketones for energy, a temporary phenomenon popularly known as “keto flu”. Those symptoms can include nausea, vomiting, headache, fatigue, dizziness, insomnia, constipation, and difficulty exercising.

Harbstreet also cautions against clock watching. Speaking from her experience working with clients, she says, “There are people who obsess over what time it is and wait for the seconds to tick down to when their eating window will open, but this kind of approach can possibly lead to bingeing and, afterward, guilt or shame.” If you relate to that feeling, the 16/8 method might not be a healthy eating approach for you.

Many people need an adjustment period to get used to fasting for 16 hours, Dr. Mattson notes, adding that “you might feel irritable and hungry during that time.” Such feelings often improve within four weeks or so, he says.

You may also need a little while to figure out how best to approach eating within your eight-hour window. “It comes down to your appetite,” Harbstreet says. “A little trial and error with the approach is a good idea—whether you go with three meals in the eight hours, or two meals and a snack or two.”

Your needs and preferences might vary somewhat from day to day, but having a general sense of your preferred approach will help you make a plan for what to eat when.

While far from being a required part of a healthy diet, 16/8 intermittent fasting is a safe and workable eating approach for many adults. Research on the possible health perks of time-restricted eating is still emerging, but early evidence hints at some benefit in areas such as weight loss, blood pressure, and cholesterol. If you want to give 16/8 fasting a try, experts recommend using your eating window to enjoy a wide variety of whole, nutritious foods.

Alice Oglethorpe is a freelance journalist in Chicago. Her writing has appeared in Real Simple, O The Oprah Magazine, Prevention, Men’s Health, Self, Shape, Fitness, Better Homes and Gardens, and many other publications.