Growth Hormones in Beef and Milk 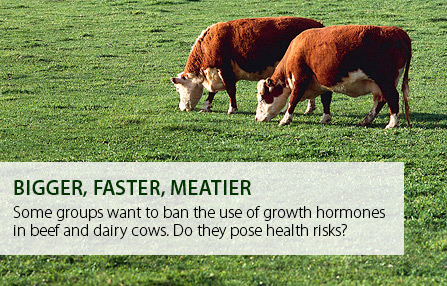 At one time, farms had a place in the popular imagination as pastoral settings where Mother Nature ruled, people in overalls hand-picked crops, and free-roaming animals produced “all natural” food. Today, of course, most Americans know that few large-scale farms actually fit this idyllic image — at least outside of children’s books.

Even if you haven’t seen the documentary Food Inc., you likely know that most modern farmers and meat producers use high-volume, high-efficiency methods and marvels of chemistry to achieve higher crop yields, more consistent quality and greater meat production.

And you also likely know that the controversies over this have been legion. Some environmental and health advocacy groups claim that such farming innovations — especially those involving drugs and biotechnology — are a scourge that’s tainted our food supply with toxic, cancer-causing chemicals. Others counter that they’ve been an aid to a precarious planet that has a lot of people to feed. Many Americans fall somewhere between these two extremes, and view modern food-production measures as both a blessing and an evil to varying degrees, given the need to fill the nation’s supermarkets with affordable products.

One particular point of controversy has been the use of synthetic growth hormones in dairy and beef cattle to promote either higher milk production or bigger, faster-maturing animals for meat.

In the United States, food producers have been using growth-enhancing hormones in cattle for decades. The U.S. Food and Drug Administration (FDA) holds that the growth hormones currently being used by the cattle industry are well-tested and safe.. But dissenters say these synthetic hormones could indeed pose several human health risks, ranging from early puberty to cancer.

Given the frequency of the news stories about this topic, it’s no surprise surveys have found that more than two-thirds of Americans say they’re concerned about the use of synthetic growth hormones in cows, even though FDA says there’s no reason for worry. And it’s no surprise that some food manufacturers now cater to this concern; a seemingly growing number of beef and dairy products carry labels that scream “NO ADDED GROWTH HORMONES.”

This leads to a few obvious questions. Exactly what hormones are we talking about here? What is the evidence for their safety or danger – and could it be worth it to pay more for hormone-free beef and dairy products just in case the FDA changes its verdict in the future?

According to Terry Etherton, Ph.D., distinguished professor of animal nutrition and head of the department of Dairy and Animal Science at Pennsylvania State University’s College of Agricultural Sciences, it’s estimated that about 20 percent of U.S. dairy cows receive rBGH. Cows treated with rBGH produce 10 to 15 percent more milk, so producers can use fewer cows to produce a given quantity of product — which they claim is better for farmers, consumers and the environment.

As for the hormone itself, there’s generally little concern that it remains in milk or poses any risk to humans: The U.S. Government Accountability Office, which criticized some aspects of the Food and Drug Administration’s approval of rBGH in the early 1990s, nonetheless concluded in a report from that period that a research analysis showedthat the hormone is “inactive and unharmful in humans.”

However, some environmentalists and health advocacy groups have long claimed that the use of rBGH may be indirectly harmful to humans, by speeding the development of antibiotic-resistant bacteria and increasing the levels of a protein that’s been associated with cancer.

Regarding the first point, they charge that using rBGH may cause higher rates of udder infections in cows (called mastitis), which in turn increases the use of antibiotics to treat those animals. “There’s a great deal of concern about the overuse of antibiotics,” says Patty Lovera, assistant director at Food and Water Watch, an advocacy organization based in Washington, D.C. This group fears that treating bacteria with antibiotics on farms could increase the number of drug-resistant bacteria, including those that infect humans.

To the second point, critics of growth hormone usage also argue that rBGH may boost levels of a protein found in cow's milk called IGF-1— and some research has linked this specific protein (though not milk consumption, importantly) to cancer growth.

“We know that greater circulating levels of IGF-1 in blood translate to higher risk, but we don’t know if drinking milk leads to increasing levels in blood,” says David Wallinga, MD, senior advisor in science, food and health at the Institute for Agriculture and Trade Policy, an organization that promotes environmentally friendly farming. “It’s a question mark, so if your approach is that use of hormones isn’t necessary, why take the risk?” he adds. Accepting this line of reasoning, Canada and the European Union have banned the use of rBGH.

Other experts — again, as well as the FDA’s official stance — contend there’s no evidence such a risk exists. One 2008 study published in the Journal of the American Dietetic Association that sampled store-bought milk in 48 states found no significant differences in the amounts of hormones or IGF-1 in organic, no-added-hormone or conventional products.

“What’s interesting about IGF-1 is that your own body is making it right now, and it’s the exact same kind in milk,” says Etherton, one of the study’s authors. “You would have to drink 100 quarts of milk a day to equal the amount of IGF-1 in your saliva.”

Further, says Etherton, pasteurization and digestion neutralizes most IGF-1 in milk. “Not much is left, and [what does remain] pales in comparison to the amount naturally in your body,” he says. “There’s no detectable increase [in IGF-1 levels] in blood from drinking milk, and no evidence that IGF-1 in milk causes cancer.”

As for the issue of udder infections, Etherton says a small number of early, poorly done studies did seem to show an increase in mastitis from the use of rBGH. “But there’s now a huge data set with large numbers of cows that don’t show adverse effects on mastitis,” he says.

What about the persistent rumors in recent years that growth hormones in milk were causing American girls to experience early puberty? Again, no evidence has supported any link to date. Some researchers believe the increased prevalence of obesity among children is a likely culprit.

In beef cattle, producers administer a variety of steroid hormones — including natural and synthetic versions of estrogen and testosterone — to make animals grow faster, convert their food into muscle more efficiently and make their meat leaner. Usage data isn’t publicly available, but Etherton says hormones are more commonly given to beef cattle than dairy cattle.

Advocates fear that residues of added hormones in meat could disrupt normal hormone function in humans, especially developing children, potentially increasing the risk of problems such as reproductive abnormalities.

“There aren’t a lot of studies, but some suggest a link,” Wallinga says. He points to a 2007 University of Rochester study that found adult sperm counts 23 percent lower in men whose mothers ate beef more than seven times a week during pregnancy compared with men whose mothers ate less beef. “Adult sperm count is a proxy for the hormone environment those kids were subjected to,” he adds, so the study seemed to suggest that their mother’s intake of beef may have altered their hormone function.

The study, however, is far from conclusive proof of a problem. In fact, all men in the study had recently fathered children. Further, Etherton notes, such studies rely on people’s memories of what they ate in the past, which tends to be unreliable.

The FDA maintains that studies show that treating food-producing animals with growth hormones poses no danger to humans. Toxicology tests have established levels at which hormone residues in meat are considered safe, and regulations require the amounts in food to be lower than that safety mark.

“Residues in meat are really, really small — at the picogram level,” Etherton adds. That’s a trillionth of a gram; if you imagine a football stadium filled with white ping-pong balls, says Etherton, a picogram would be represented by 20 or so orange balls in the mix. “There’s no evidence of increased risk to the consumer or any human health effects at those levels,” he says.

At the same time, Etherton acknowledges that long-term, well-controlled population studies, which are difficult and expensive to conduct, have largely not been done to explore the possibility of risks from hormones in food-producing animals. Given the existing research, some scientists feel there’s little evidence to suggest such studies are needed. Other observers suggest a higher burden of proof should be required of food manufacturers to demonstrate hormones are absolutely, 100-percent safe.

If you’d rather consume “hormone-free” dairy or meat products, know that there’s no strong research that suggests there are health benefits in doing so. It’s really a matter of personal preference. That said, as the popularity of organic foods might suggest, many people have that preference. If you’re one of them, here are a few tips:


Look for organic options. U.S. Department of Agriculture standards for products labeled “organic” require that animals not be treated with either growth hormones or antibiotics; products bearing a “USDA Organic” seal are in compliance with these rules. But remember that organic foods tend to be more expensive and, according to the FDA, offer no proven health advantages over non-organic foods.

On non-organic foods, look for the right words. Check the packaging or label for “no added hormones” or “from cows not treated with rBGH.” Don’t assume that other wholesome-sounding terms, such as “natural” or “free range,” mean that the food comes from animals that weren’t given growth hormones.

Be ready to contact the food manufacturer if you want to know for certain if a particular dairy or beef product comes from animals that were given growth hormones. The FDA doesn’t require companies to disclose the use of growth hormones on food labels, which is a major complaint from advocacy groups. “We think companies should have to disclose what they’re using, but there’s no requirement to do so,” says Lovera. However, many farmers make a point of raising animals without the use of growth hormones and market their products as such.