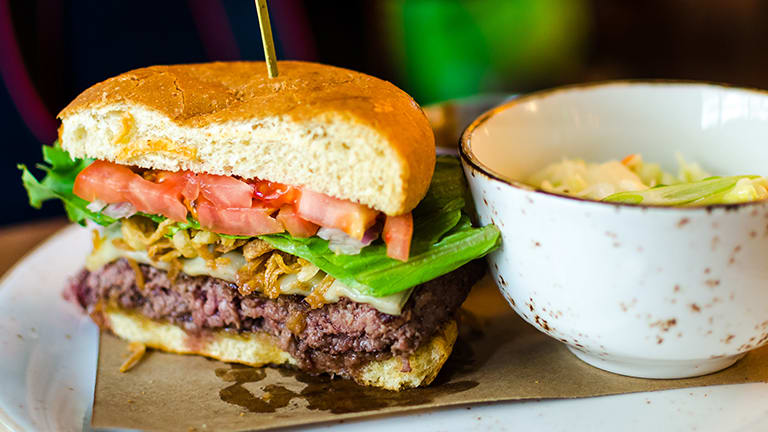 Exotic meats: How many SmartPoints are in venison, rattlesnake, and other game meats?

When your palate needs a punch, add game meat to your menu.
By Kate Elizabeth Queram

Chicken, fish, and beef don't quite hit the spot? Enter game meats, which are increasingly available in mainstream grocery stores. Venison, ostrich, and buffalo aren't just accessible—they can easily fit into your SmartPoints® Budget on WW. (And the same goes for alligator and rattlesnack, if you're willing to order them online.)

Most game meats can be incorporated into your favorite recipes, but dabbling in the exotic can deliver benefits beyond improving your culinary prowess. Game grub is typically high in protein and low in fat, meaning it cooks much faster than traditional meats. Another perk: The majority of game meats come from free-range, grass-fed animals, meaning you’re contributing to sustainability as well as spicing up your diet. Here's what you need to know about your options and the SmartPoints values therein:

Venison, or deer meat, has been around long enough that it’s hardly considered exotic.

“As a child, the only way I heard that people ate venison was because someone’s father layed in a snow hole for 12 hours to shoot a buck,” says Steve Mannino, executive chef at Rustico, a gastropub in Alexandria, Virginia. “But by the late ’90s, marketing machines like the Food Network began to direct our dining with recipes and professionals telling us we can cook like them at home. People began to seek out venison for the flavor and low fat content.”

Venison has 2 SmartPoints for 3 oz, and comes in a variety of cuts, including strip loin, flank steak, medallions and tenderloin.

Of the en vogue exotic meats, buffalo is by far the most popular, according to Kevin Roberts, host of the cooking show "BBQ Pitmasters" on TLC. It’s also the one most likely to pop up on the shelf at your grocery store. “It’s actually readily available at a lot of national chains now,” he says.

Buffalo meat comes in all the same varieties you’d get from a cow, including sirloin (3 SmartPoints for 3 oz), ground (4 Smartpoints per 3 oz serving), and steak (1 SmartPoints value for 3 oz). It’s high in protein and super-low in SmartPoints values. Due to its low fat content, buffalo meat is also extra-easy to cook—a patty will be edible after about 6 minutes over low heat, compared to around 10 minutes for a ground-beef patty.

“It basically tastes like a really-high-quality hamburger,” he says. “It’s lean, a little sweet, and not overly gamy.”

Because the meat can dry easily, Roberts recommends serving buffalo burgers with low-fat condiments like mustard and plenty of veggie toppings. It can also be substituted for beef in other dishes, like stew, or mixed with vegetables in stir-fry or meat loaf.

It’s easiest to find this big-bird meat in ground form, according to Roberts. It can be just as lean as your favorite white meat—even though it looks totally different than say, chicken. “Ostrich is actually a red meat, but it doesn’t have the fat that beef does. It has more of the cooking characteristics of poultry,” Roberts says.

“The taste is great—rich, almost lamb-like, but with the texture of beef fillet,” says Justin Rosberg, cofounder of national gourmet butcher chain, The Meat House.

Ostrich can be cooked in patty form and can also be skewered into kebabs. Fillets or medallions will cook about twice as fast as beef, according to Rosberg, so be sure to keep an eye on it when it’s on the grill.

The reptile meats are the trickiest of the exotics in part because you're dealing with relatively small portion sizes: “With alligator, you’re only eating the tail meat. With rattlesnake, it’s basically all connective muscle tissue and bone—there’s not a lot of meat on a snake,” Roberts says.

SmartPoints in alligator and rattlesnake:

Because of their fat-to-protein ratio, both gators and snakes have a chewy texture and clean flavor, Roberts says.

Their light taste means you can toss them in a marinade before serving them on skewers with hearty vegetables.

When planning a meal featuring exotic meats, remember not to be intimidated by uncharted territory. The key to a good meal, regardless of ingredients, is planning, Mannino says.

Remember the basics. All of the game meats mentioned here have high protein and low fat content, meaning they’re going to cook quickly. Don’t be surprised when they only take a few minutes to brown, and be wary of overcooking.

Most important, be daring enough to opt for something new. Bragging to your friends that you’ve mastered the art of skewering snake meat or barbecuing buffalo may be sufficient motivation for some to brave exotic fare, but the health benefits offered by game meat are reason enough to try it!