Skip to main contentSkip to footer
Join now
Join now
Fitness & Exercise
This 5-Move Workout Will Engage Your Entire Body with Just 1 Prop
It's the secret to your next great sweat session.
By Alison Feller
The simple weighted sphere that is known as the medicine ball has benefits that you can't get from dumbbells or kettlebells. "The medicine ball creates variability," explains Nikki Warren, the co-founder of Kaia FIT, a holistic health program designed for women, by women.  "You can take a regular squat and turn it into a squat and toss, for example, which initiates more muscle development in a single exercise." Use the ball solo or toss with a friend. Ready to try it? Go have a ball with Warren's five-move workout:
How to do it:
Perform 5 reps of each exercise, and complete the five-move series at least one time. Work up to doing the series three times. Before starting any new exercise routine, make sure to check in with your doctor.
What you'll need: A 15- to 20-pound medicine ball.

The moves:
1. Squat thrust
Start standing with feet hip-width apart, holding the medicine ball at chest height with both hands. Lower into a squat and place the ball on the ground. Jump back into a plank position, then back into a squat. Pick up the medicine ball and press it overhead. Make it harder: Keep one hand on the ball when you jump into the plank (as pictured). 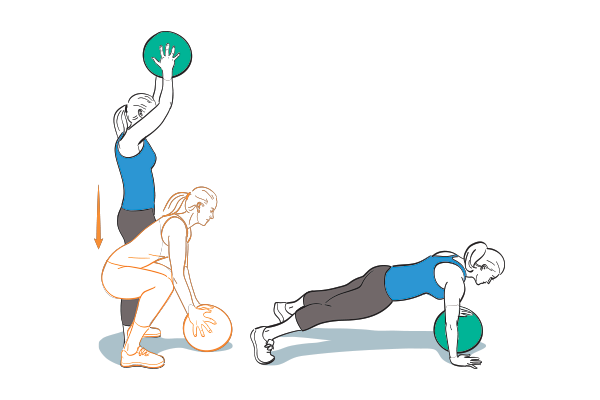 2. Russian twists
In a seated position, hold the ball with both hands at chest height, and lift legs off the ground to a 45-degree angle (or as close as possible). Twist from the core to tap the ground with the ball on each side of the body. The faster you twist and the higher you can hold your heels off the ground, the more you’ll feel the burn. Make it easier: Keep your heels on the ground instead of lifting legs up. 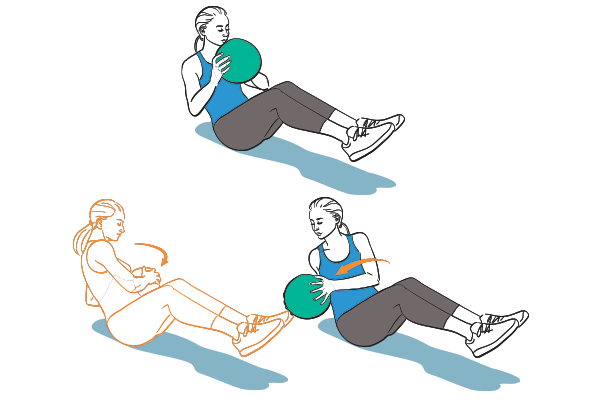 3. Ball slams
Stand with feet hip-width apart, holding the ball in both hands. Raise the ball overhead, and using your core and back, slam it as hard as possible to the ground. Drop into a deep squat to pick it back up and repeat, keeping the core engaged the entire time. Make it harder: Add speed or complete 20 reps, instead of 15, to up the ante. 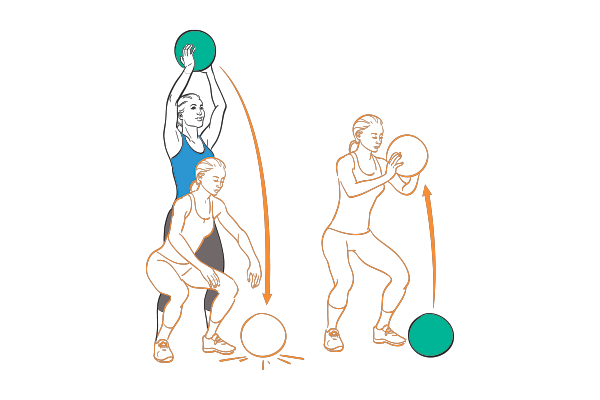 Begin in a high plank position, then place the left hand on the medicine ball directly underneath your left shoulder. Inhale as you lower down into a push-up, and exhale on the way up. Switch sides. Make it easier: Decrease intensity by dropping your knees to the ground while keeping your core engaged. 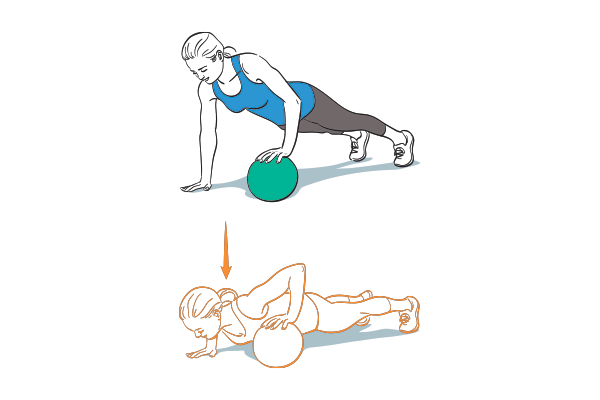 5. Squat and toss
Stand with feet hip-width apart, holding the ball at chest height. Keeping your gaze up (looking down can strain your back), lower into a squat. Then explode up to standing and toss the ball as high overhead as possible. Catch the ball and drop back into a squat. Make it easier: Press the ball overhead instead of tossing it. 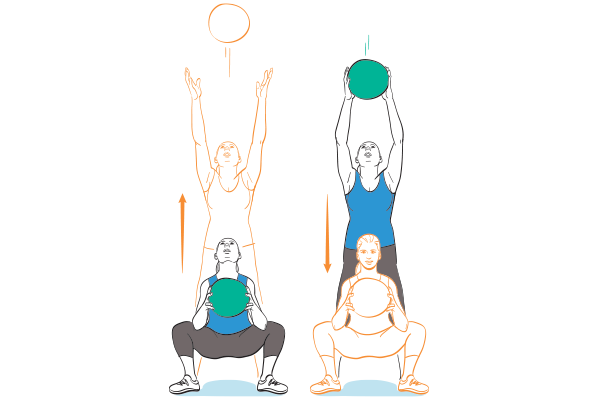