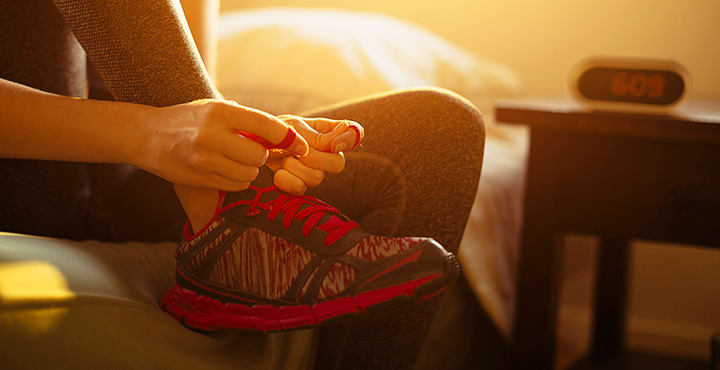 Why Now is the Time to Become a Morning Exerciser

Summer is the best time to develop an early-riser mentality. With the sun up pre-6 a.m., it makes it easier to set the habit even if you’d rather hit the snooze button. A few simple tactics can help you become more of a morning exerciser and reap the benefits of first light.

One incentive: Heading out into the bright morning light may help you lose weight, according to research from the American Academy of Sleep Medicine that was done on a small group of people. Those exposed to moderate or higher intensity light earlier in the day had lower body mass indexes and percentage of body fat than those who received light exposure later in the day.

Plus, the start of the day naturally lends itself to the creation of healthy practices. "The morning is one of the best times to create a habit because of the way habit formation works," says Eamonn Leaver, a psychologist based in Australia.

"Some habits are formed around a basic neurological loop made up of a cue, routine, and reward. When the loop is repeated enough times it's eventually done without thinking and thus becomes a habit." The key, says Leaver, lies in choosing a regular morning activity and using it as a cue. Then pick a way to reward yourself.


Try these three expert tips to help you become a morning workout person:


1. Create your own reward system.


To create a morning walking habit, go for your walk after performing a regular task such as feeding the dog, says Leaver. After your walk, give yourself a reward, which may be something as simple as a cup of coffee, if you are a coffee lover. You must be consistent and give yourself time, however. “Strive to do this every day for at least eight weeks,” Leaver says. “Try not to miss a day, but if you do, make sure you don’t miss two days in a row. Eventually, the routine will become habit, and you won’t even think about completing it anymore.” Since the morning includes some regular routines to begin the day, they provide ready-made cues to start a new, healthy habit, he adds.

2. Set your workout clothes out the night before.


“Putting your workout clothes out the night before sets you up so you’re ready to go when you wake up,” says Elizabeth Lombardo, PhD, a psychologist based in the Chicago area and author of Better Than Perfect: 7 Strategies to Crush Your Inner Critic and Create a Life You Love. Better yet, sleep in your workout clothes and you’ll have a ready reminder of your morning plan.


In addition to putting out your workout clothes, set up your breakfast. Agree to meet a walking friend. “Having a plan decreases stress, which contributes to weight gain,” says Kyrin Dunston, MD, an Atlanta-based Board-Certified ob-gyn and author of Cracking the Bikini Code: 6 Secrets to Permanent Weight Loss Success. “If you wait until you wake up each morning to decide to work out or not, what to eat or not, what to wear, etc., then the sheer number of decisions you must make before 9 a.m. will stress out the most organized person.”

Start tomorrow with these three steps while the sun is rising early with you.

RELATED: Quick early exercises to do at home