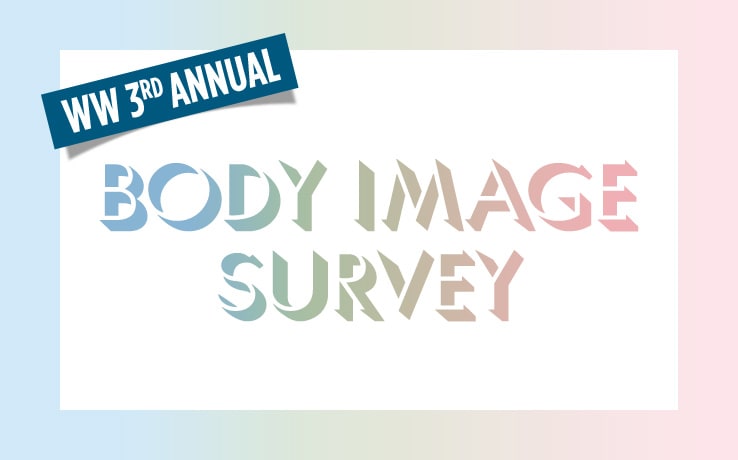 This year's results and how the responses have changed over time.

For this issue, we sent our 3rd Annual Body Image Survey to our Weight Watchers Magazine Reader Panel and colleagues and friends from around the world. The survey consisted of multiple-choice and open-ended questions (we sprinkled the responses to the open-ended questions throughout). We received responses from more than 600 people from around the world about what they think and how they feel about their bodies. We compared the findings to our survey from the past two years.

One result that surprised us this year: TV affects body image the most, and social media comes in a close second. Here’s some more of what we learned.

94% of you said your body image has changed over time.

47% told us it’s become more positive, because you’ve made changes that make you feel better about it.
32% said it’s improved, as you’ve learned to love yourself and all your “flaws.”
21% said it’s gotten more negative; you still struggle with it.

28% of you never or almost never compare your body to someone else’s!


But if you do, here’s who you compare yourself to:

WW: In both 2016 and 2017, around 43% of respondents agreed that they don’t compare their appearance to that of others. But if they do, all three surveys yielded approximately the same: An average of 55% compare their bodies to that of friends and family.

I spend a lot of time in front of the mirror.

I avoid looking at myself in the mirror.

What would you say to help someone who has poor body image?

Don't compare yourself to anyone else. The sun doesn't compare itself to the moon; they both have their time to shine!

WW: Our favorite quote from the bunch!


WW: We added this question in 2017 because the May/June 2017 Feature, “See Me Now,” dealt with the topic of invisibility. Last year, we used the word “teased” instead of “discriminated” and 69% said Yes. It seems that teasing is more universal than discrimination.45%: Yes
55%: No

WW: In 2017, we asked respondents if anyone has influenced their body image. “The media” was the top choice, and “Your mom” came in second. This year, we wanted to ask about upbringing in general, without assigning blame to any one thing.

New question for 2018!
Your Legs: The part of your body you’re most proud of

WW: As we carry on this body image conversation each year, our survey evolves. That’s why we asked respondents the part of their body they’re most proud of this year, and “Legs” was the top response!

Do you find yourself judging other people’s appearances?

What changed your body image?

I have moved from seeing "skinny" as the goal to being healthy and strong.

WW: Over the past two years, we asked this question in different ways—the first year, we grouped several statements together and had respondents answer “Mostly True” or “Mostly False.” Last year, we posed this as an open-ended question. This year, we decided to try a multiple-choice style question and “practicing positive self-talk” yielded the most responses.

Is your body image affected by any of the following? (as many as apply)

If your body image is affected by social media, how?

I used to feel really defeated looking at all the fit women in Instagram. Now I look to them for motivation.

WW: We wanted to find out the impact of social media, so we asked this open-ended question this year. Respondents are making a more conscious effort to tailor who they follow and the types of images that come up on their feed. Readers are noticing the importance of taking in the right images.

WW: We focused mostly on body image over the past few years, but we wanted to add this question so that we could see if focusing on your health could change your body image. The answer is an overwhelming “yes”!