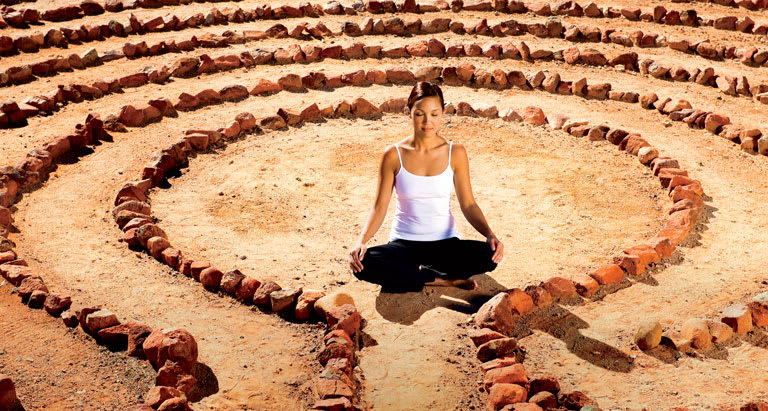 What Happened When I Went to a Silent Retreat

Want to quiet the noise and make sense of the world inside your head? For this writer, pushing the mute button worked wonders.
By Beverly Willett

I went on my first silent retreat 11 years ago, in the throes of an excruciating divorce. I was raising two daughters, recovering from surgery, and approaching 50. As my stress mounted, my meditation teacher (I’d attended her classes for years) suggested a rural retreat. A silent one.

My life in New York City was fast and noisy, but I was used to it. Silence? Not so much. But my teacher insisted that it was just the medicine I needed. “Silence cuts out a lot of stimuli so the brain can focus only on what’s inside it,” explains psychologist and mindfulness expert Laura Kasper, PhD.

I was skeptical, but I also knew I needed a respite; besides, how hard could it be to keep my mouth shut?

I arrived for my four-day retreat and hung a badge that read “SILENT” around my neck—a cue to others not to speak to me. That first day, I meditated for several hour-and-a-half sessions, breaking to stroll the meditation center’s expansive grounds, reciting mantras. (Yes, out loud. Contrary to popular belief, silent retreats do not ban all vocalization. As Kasper notes, the point is to disengage from technology and extraneous conversations that lure you from your interior world back to the social one.) The day whizzed by. No clients to placate, meals to cook, kids to look after. I turned in early instead of crashing from exhaustion. Four days of this? Bring it on.

On day two I woke up late, missed breakfast, tried and failed to meditate, and wandered outdoors sobbing. The eerie quiet filled me with terror. No amount of New York noise, it seemed, was as loud as the monkeys inside my mind. “It’s a common reaction,” says Washington, D.C.–based clinical psychologist Jeff Rosenberg, PhD, who has attended many retreats. “Our minds can take a few days to settle. If you’re unfamiliar with these sensations, you can get very discouraged.”

After my meltdown, I followed the advice of a Buddhist nun and focused on breathing. I eventually calmed down, and my urge to speak subsided. I realized that the absence of sound is not silence, but merely a pathway to it. Arriving at true silence takes longer than a day.

I’d gone on retreat to find a way to cope with my divorce. In the silence, I uncovered an older, more deeply buried anguish—my father’s untimely death two decades earlier. As I breathed out my anger in the form of imaginary black smoke, I actually felt the pain leave my body. Positive thoughts edged out negative ones. I left on the fourth day full of hope.

For several years, I went on an annual silent retreat, but then got distracted by work, educating my kids, and relocating to a new city. But before long, an unease bubbled up. My career had stalled, and though I was far from the basket case I’d been when my marriage crumbled, I was often worried and crabby. I went online and found Mepkin Abbey, a Trappist monastery offering silent retreats, just two hours north of me. One September morning, I got in my car and took off.

As I drove through the abbey’s oak-lined entrance, I was flooded with gratitude. “I am so, so fortunate,” I thought.

After stashing my suitcase in the single-bedded, suitably monastic room that would house me for the next five days, I took off for the abbey library. As I loaded up my arms with books, I once again became the giddy girl who made regular Saturday trips to the bookmobile.

The habit of silence quickly returned, sparing me any breakdowns. I meditated. I prayed. I hiked. I napped. I rose at 3 o’clock one morning for vigils. Guided by the stars and a flashlight, I made my way across a footbridge and up an unlit path guarded by toads. They serenaded me as I passed.

Inside the chapel, I chanted with monks who’d committed their lives to silence. At the end of the hour, bells rang and we stood together, awaiting the dawn.

An hour or so later, I walked to the dining hall for breakfast. I now found it delightful to eat in silence. Each bite was purposeful, with no stress goading me to overeat (though the raisin-bread toast with butter was so good, I had seconds).

All thoughts of multitasking vanished, the stillness magically reordering my usual frenzied priorities.

I followed my spirit wherever it took me—which, one sunny afternoon, was to the abbey’s labyrinth, situated in a field of bees and wildflowers.

Bare-legged in sandals, I was poorly dressed for a walk in the wild. And I was terrified of bees. But with the abbey’s honey-colored rescue dog at my side, I entered the maze and followed the circular path to the center (labyrinths have long been a tool in meditation). Once I reached the sacred center, I sat on a bench, content. The dog wandered away. Bees buzzed all around but left me in peace.

I read into the night, immersed in St. Teresa of Avila’s The Way of Perfection. My problems receded, and my mind drifted to my daughters and their futures and to my elderly mother.

The next day in the courtyard, I noticed a group of Zen-like rock formations other retreatants had built. I grabbed a pile of rocks and fashioned my own sculpture, fascinated that the odd-shaped stones added stability to my tower and the seemingly perfect ones toppled it—an outcome I found oddly reassuring.

By the end of my stay, joy had replaced my doldrums. I had no answers to my career impasse, but without consciously doing so, I had somehow reset my course.

In a world where so many have so little, I hesitate to call my periodic dips into silence a necessity. They are, after all, a luxury available only to those with a certain privilege. But flight attendants are onto something when they tell you to put on your oxygen mask before helping others. Silent retreats give me the oxygen I need.

RELATED: How to Meditate