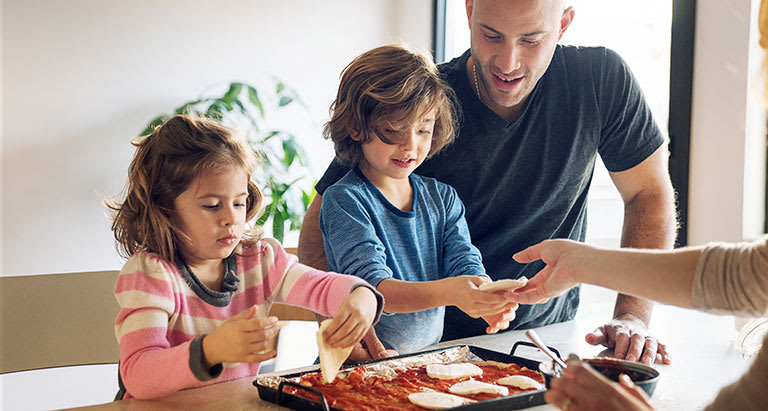 How to Teach Kids to Make Good Food Choices

Are you too type-A at the table? When it comes to healthy eating, kids can benefit from a little freedom.
By Victoria Clayton

Teaching kids to make smart food choices that fuel their bodies and help them grow is a challenge—especially when every celebration ends with ice cream or cake (or both), their favorite holidays involve bags and baskets of candy, and their bodies are hardwired to like sugar.

But just as your WW journey involves making choices—such as deciding when to enjoy a slice of triple-chocolate cake, and when to reach for the fresh pineapple instead—your kids should not be completely restricted in the foods they eat. “The research is pretty clear that [restricting food] can backfire in the long-term,” says marriage and family therapist Diane Gehart, PhD, a professor in the department of educational psychology and counseling at California State University, Northridge.

Studies have found that children whose parents made great attempts to control their child’s diets reported higher intakes of both healthy and unhealthy snack foods. And one study in the Annual Review of Nutrition concluded that parenting strategies that restrict children’s access to snack foods actually make those foods more attractive. Furthermore, those same researchers found that children with excessively controlling parents tend to choose more forbidden foods behind their parents’ backs than kids whose parents are not as strict. So if your aim is to raise healthy kids who make healthy choices without you, controlling food too much defeats the goal.

Try these strategies instead.

Going to a party and want to plan your kid’s meals accordingly? Politely inquire about the foods that will be served. Because of allergies and food preferences, some hosts will even mention food on the invite. “This allows you to discuss the menu with your child before the event,” says Wesley Delbridge, RD, a Phoenix-based spokesperson for the Academy of Nutrition and Dietetics. If you’re going out to a restaurant, often you can look up the menu online. Then make a plan with your kid. “Tell them it’s a special event and it’s fine for them to have dessert, but that they also need to eat the sandwich or whatever else is available that packs more nutrition.”

Keep morals off the table

Don’t present certain foods as good or bad. “When we make a health choice a moral issue—deciding that eating cake is ‘bad,’ for example—it means that if we engage in that activity, we’re bad,” says Elliot Berkman, PhD, an associate professor of psychology at the University of Oregon in Eugene. “That’s counterproductive—it attaches guilt and shame to certain foods.” Instead, make food discussions about feeling powerful and healthy. If your kid is young, try the verbal strategy Delbridge uses with his 5-year-old: Explain that you want her to eat some “power foods” or “power bites” (aka more nutritious foods).

It works for you, and it will work for your kids, says Delbridge: Don’t let them go to a party famished. Have them eat a fiber-rich snack beforehand, like a skin-on apple, raspberries, or blueberries. A small handful of almonds also contain plenty of filling fiber. And make sure kids are well hydrated. “If children are fairly full with lots of fiber and fluid, that will naturally cut down on the treats they’ll want to eat,” he says. If you know from experience that your kid won’t sit still long enough to have a healthy meal at the party, feed them lunch or dinner before you go. Chances are the grape tomatoes and tuna sandwich on whole wheat that you offer at home will be more nutritious than the slice of cheese pizza at the event.

Aim for a solid B

Gehart says she uses the 90/10 rule with her two children. “If we have a healthy diet about 90 percent of the time, then we have room for a popsicle or an occasional piece of birthday cake at a celebration. I may not love the sugary treats, but in the bigger picture the kids eat well and it’s simply not a big deal.”

Give Kurbo a try

WW has introduced a program designed specifically to help kids and teens reach a healthier weight. It’s called Kurbo, and like WW, it’s science-proven and simple to use. On Kurbo kids and teens can work toward their goals, feel great about their success, and have fun along the way. Learn more at kurbo.com.