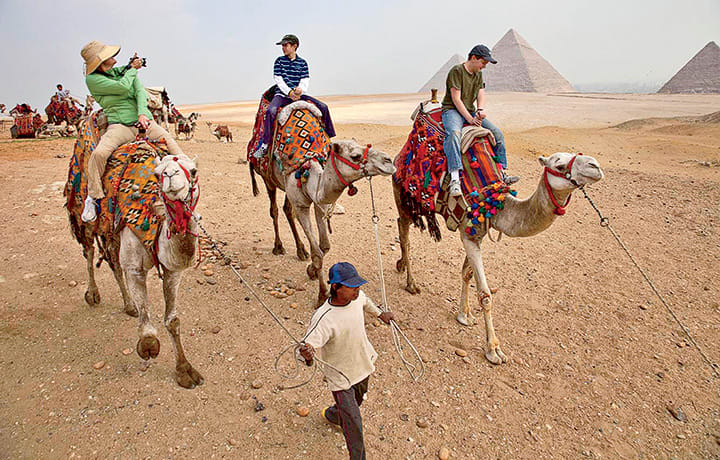 During her best trip ever, one writer learned that worrying doesn't create memories.
By Jeannie Ralston

The moment of truth came at 3 a.m. in the Holiday Inn Express at the Madrid airport. That’s when my image of myself—savvy, globe-trotting mom—collided with reality. I was about to take my 11- and 13-year-old into a revolution. It was February 2011, and we were booked on a morning flight to Cairo. Just weeks earlier, protests had erupted in Tahrir Square, and a few days ago President Mubarak had been forced to step down. Never, in our family’s three years of travel and homeschooling, had I felt so far out of my comfort zone—even though getting out of our comfort zones was precisely the point of this project.

It was the kind of education my husband, Robb, and I had always dreamed of giving our boys—broadening their horizons and showing them firsthand that the American way of living was not the only way. And the middle-school years were an ideal time to do it, since the kids were old enough to absorb what they saw, yet young enough not to be distracted by social pressures, or embarrassed to be with Mom and Dad. Robb and I developed a curriculum, figured out coursework, and came up with itineraries to match. We spent stretches at home in Texas studying not just math and science but the next places we’d visit. So before going to Machu Picchu, we did a deep dive into the Incas. For the current leg of our trip, we’d spent four months learning about Egypt, the ancient Greeks, and the Roman Empire.

I’m not a trained teacher, and I’d never planned such challenging trips (hopscotching through South America on a shoestring; packing a single suitcase for both a safari in Africa and museum-going in Paris). Arguably harder was fending off the naysayers— including my mother, who claimed we were depriving our sons of a “normal” education, with school dances and football games. (My response: “Nothing good ever happens in middle school.”)

The whole process taught me that it’s a lot easier to be adventurous when you have only yourself to worry about. But intrepidness is almost the antithesis of mothering. I willed myself to stay calm as we sat in an open Land Rover 20 feet from two lionesses in Tanzania; floated in a hot-air balloon over the Cappadocia region of Turkey; and rode through the Himalayas in China’s western Sichuan Province on a highway that’s rated one of the world’s most dangerous. (I discovered this fact after we finished the drive; only then did I have my breakdown.)

In each of these cases, I recognized that worry was the short-term price I paid for creating rich experiences and lasting memories.

Egypt was different. The risk seemed greater than any possible reward. I couldn’t sleep that night in Madrid, and by morning I’d decided we weren’t going. Enter Robb, calm and practical. He reminded me that we’d checked with contacts in Cairo to confirm that the country was returning to normal. In fact, an American friend in Egypt had encouraged us to come; the economy desperately needed the tourist dollars, he’d said, and with fewer crowds we’d have a chance to meet and talk to actual Egyptians, rather than merely other tourists. I’d kick myself, Robb said, if I passed up this opportunity. I finally agreed and, still shaky, boarded the plane. I spent the entire flight over the Mediterranean quietly chanting prayers to myself.

I generally hate to be wrong, but not this time. Egypt may have been in tumult, but for us it was a joy, except for our fears about the plight of the people we met. Everywhere we went, they were happy to see us, and urged us to tell our friends that their country was safe to visit. At the Great Pyramids, which pre–Arab Spring, drew thousands of tourists a day, we were four of only 50 visitors. Instead of enduring a long wait to enter the Egyptian Museum, we waltzed right in. We’d booked a 16-passenger sailboat to take us down the Nile, but everyone else had canceled, so our family and 12 crew members had the boat to ourselves.

One tour operator told us that he’d been down on the square protesting Mubarak’s regime. He’d known he was risking his life. “But I have two children,” he said. “What choice do I have but to fight for their future?” I was moved by his devotion and courage. So much of what we experienced in Egypt was foreign to me, but doing anything for your kids was a concept I understood completely.