How Childhood Friends Can Unlock Memories

When one writer reconnects with a long-lost best friend, she unlocks a treasure trove of blissful memories. Here is her story.
By Maddie Dawson

For years I believed I’d had an unhappy childhood, mentally ticking off the checklist of gory details: my parents’ fights, their eventual divorce, their remarriages, the breakdowns and freakouts. But recently I learned a mind-altering fact: My childhood wasn’t unhappy after all. In fact, it was kind of . . . wonderful. This realization was brought about by technology, specifically email. And a birthday ending in zero. And a promise I made when I was 8 years old.

Pam was 6 and I was 5 the day we met, at a birthday party. Pam had lost her party hat, and I helped her find it. “Now we can be best friends,” she said, in that decisive way 6-year-olds have. When we discovered we lived around the corner from each other in our Florida neighborhood, the deal was sealed. We were inseparable—“ joined at the hip,” our moms said—going back and forth between our homes so constantly that our neighbors complained about the visible trail we plowed through their lawns. And we each spent so many nights and ate so many meals at the other’s house that both sets of parents jokingly threatened to claim the two of us as tax deductions. We did everything together. For years. When I was 8, we pinkie-swore that we would be best friends forever—for our whole lives. Even then, I knew it was a big promise. We were sitting on my backyard swing set talking about our mothers. Why didn’t they have best friends? Where had their friends gone? Who did they share secrets with? That was not going to happen to us.

Then, sure enough, in what felt like the blink of an eye, life did what it always does: It swept in like a giant wave and flung us apart.

My parents divorced when I was 12, and my mother remarried and moved my siblings and me 3,000 miles away to California. “We need a fresh start,” Mom told us, evidently referring to the scary new school where we knew no one and a stepfather who mistreated her as well as the three of us. There was no money for pricey long-distance phone calls and no social media to help Pam and me stay in touch.

We wrote letters for a while, then stopped. By the time I went back to visit my dad two summers later, everything had changed. I’d become a California girl, wearing eyeliner that looked like it had been applied with a trowel, and Pam was hanging out with a new crowd of kids I’d never even met. It was as if she were on one side of the creek and I on the other, and the piece of wood that might have bridged the divide was nowhere to be seen. After that, we grew up and went off to college far apart. Aside from a couple of whirlwind sightings, we lost contact. In the years that followed, our communication was limited to breathless Christmas cards that relayed facts more than feelings: “Hey, I’ve remarried!” “Three kids now! So busy!” “Soccer, baseball, dance lessons!”

Then came a dark period. Both my parents died, as did Pam’s father. Shockingly, within the space of a few years, we lost all three of our still-young siblings. And though we hadn’t spoken in decades and were now in our 40s, we talked and cried together on the phone. We vowed to stay in touch after that. We didn’t.

Last spring, I awoke one morning acutely aware that it was Pam’s birthday. One of the big ones. And suddenly I was pierced with the realization that more than 50 years had passed since we’d met and that there was no one else left who recalled anything about my childhood. No one who could say, “Remember that time . . . ?”

“What if each of us sends the other a memory once a week? Just a few lines about something from our childhoods.”

“I have an idea,” I wrote in an email, after rummaging through a box of old holiday cards to find the address. “What if each of us sends the other a memory once a week? Just a few lines about something from our childhoods.” “I love it,” she immediately wrote back. I reminded her of the older man of 10 we had a crush on when we were 7 and 8. We festooned the sidewalk in front of his house with chalk hearts, flowers, and declarations of love. His mother was not amused. Pam reminisced about the zillions of trips to Jacksonville Beach that she went on with my family, bringing everything back to me: the red cooler we lugged out to the sand, the Styrofoam boogie boards we rode for hours, the peanut butter sandwiches my mom packed. I recalled the orange juice cans we used to curl our hair. She mentioned the third-grade dance contest we won. I emailed a memory of going to horror movies on Saturdays. She described the spaghetti my mom made every year on my birthday. Pam has also recreated our neighborhood—the woman who insisted we sing a song or tell a joke before she’d hand over a Halloween treat, the kids we shamelessly played with only in summer just so we could swim in their pool, the boys we danced with in fifth grade. “Their hands were so sweaty!” I say, and she chimes in with “Yes!” 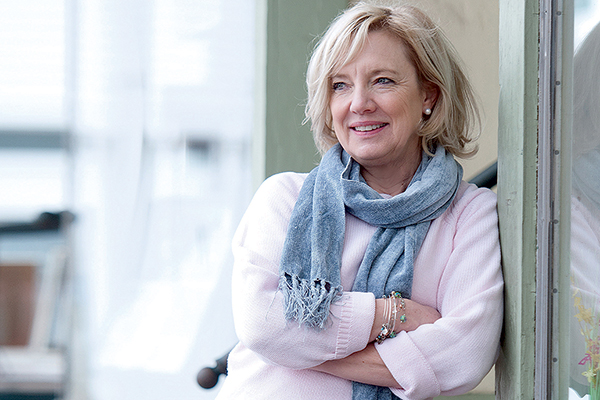 How had I forgotten all these experiences? A dance contest? Me? “Were my parents fighting the whole time at the beach?” I ask. “No!” Pam replies. “They were really fun!” I don’t doubt her. But how could I have permanently shelved so many good times? How had I not remembered that my dad took us with him on errands? That my mom polished our nails? That my sister and brother were such funny little nuisances? I had let so much joy—so much fun!—slip through the cracks. Yet those lovely events shaped me and likely helped me weather
the storms that came later.

Of course, Pam and I both have our daily friends, people who’ve seen us through our adult lives, who know our husbands and kids and what our kitchens look like. But she and I alone have access to those early years. Nudged by her recollections, I once again see my parents jitterbugging in the living room. I imagine my mother’s beautiful, unlined face, hear my father’s ready laugh. By reminding me of the girl I was, and the love I had, Pam has restored a missing piece of my story. Whenever her name appears in my inbox, I’m once again smelling the salt air, toting the cooler, giggling all night at a sleepover. And I can’t help but smile, secure now that part of me will always be that young and that happy.


Try this at home


Want to attempt an experiment similar to Maddie Dawson’s?
Social media like Facebook and Instagram are great communication tools, but research shows they’re no substitute for one-on-one sharing. So sit down and write a letter to an old friend with whom you’ve lost touch, either on paper or via email. Then see what develops.