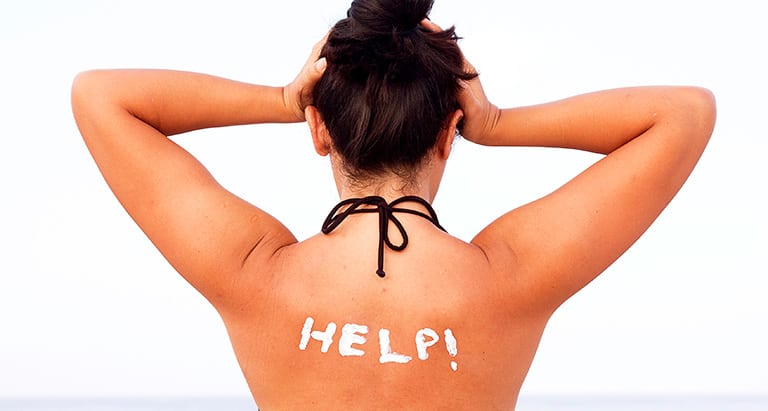 How to Treat a Sunburn

Although they only last for a few days, sunburns can be painful. Here’s how to ease the ache.
By Maria Masters

A sunburn probably isn’t the beach souvenir you were hoping to take home. The good news is that the redness typically fades in a few days. The bad news: depending on how severe the burn is, you could develop blisters or even sun poisoning.

As a general rule, people with light skin are much more likely to have sun damage, but those with darker skin, including people of any ethnicity, can also be affected. According to the U.S. National Library of Medicine, very light-skinned people who don’t wear sunscreen or other protective clothing can get a sunburn after spending just 5 to 10 minutes outdoors. But people with darker skin aren’t immune to burning, either—left unprotected, they can get a sunburn after 20-30 minutes in the sun.

The most important thing to remember about sun exposure: As soon as you notice your that your skin is turning red, step out of the sun. “Any further sun exposure will exacerbate the damage,” says Faramarz Samie, MD, PhD, Vice Chair of Department of Dermatology at Columbia University Medical Center in New York City. Once you’re in the shade, follow these steps for a quicker recovery.

For a Mild Sunburn …

When skin is hot, red, and painful, take a cool shower to temporarily soothe your skin—just be sure not to linger. Staying in for too long can cause dryness and even more irritation. Next, the American Academy of Dermatology recommends applying a moisturizer that contains aloe vera or soy to lock in the water.

Dr. Samie also recommends taking an over-the-counter pain medication to ease the pain and swelling. “For sunburns, NSAIDs [nonsteroidal anti-inflammatory drugs, like ibuprofen] are more effective than acetaminophen,” he says.

Throughout the day, you can treat the burn with moisturizing cream, aloe vera, or cold compresses, such as frozen vegetables wrapped in a towel. It also helps to drink plenty of water: Your body will reallocate more fluid to the surface of your skin, so you may need to stay more hydrated than usual.

For a Moderate-to-Severe Sunburn …

After 24 hours, the burn gets worse and you feel nausea, headache, and chills, then your sunburn has progressed. A topical hydrocortisone cream can help ease the pain, redness, and swelling that can accompany a sunburn; some brands are sold over-the-counter, while others are only available with a prescription from your doctor. (One warning: Don’t use products that contain benzocaine or lidocaine, which can trigger an allergic reaction in some people.)

If your skin starts to blister, Samie recommends calling your doctor, who can help you treat the wound. Whatever you do, don’t pop the blisters—if your skin is broken, you may be more likely to get an infection, he says. Keep the wound moist with an emollient (like Vaseline) and dress the area with a nonadhesive bandage.  Try not to irritate it by wearing any tight, abrasive clothing.

For a Severe Sunburn…

A sunburn can trigger a condition that’s sometimes called “sun poisoning.” If this happens, you can experience symptoms like a fever, chills nausea, or a rash, which require immediate medical attention.

Just because your sunburn has faded doesn’t necessarily mean that there aren't long-term health concerns. UV rays from the sun can damage the DNA of your skin cells, possibly leading to skin cancer in the future. In fact, one 2014 study by Harvard researchers found that people who experienced five or more blistering sunburns between the ages of 15 and 20 had an 80 percent increased risk of developing melanoma and a 68 percent increased risk of non-melanoma cancer than those who’d not experienced sunburn between ages 15 and 20.

We’re not saying you should panic, of course, but it is important to keep close tabs on your skin so that you can spot any new, irregular spots right away. Try to give yourself a skin check once a month and schedule a professional exam with your doctor or dermatologist once a year.