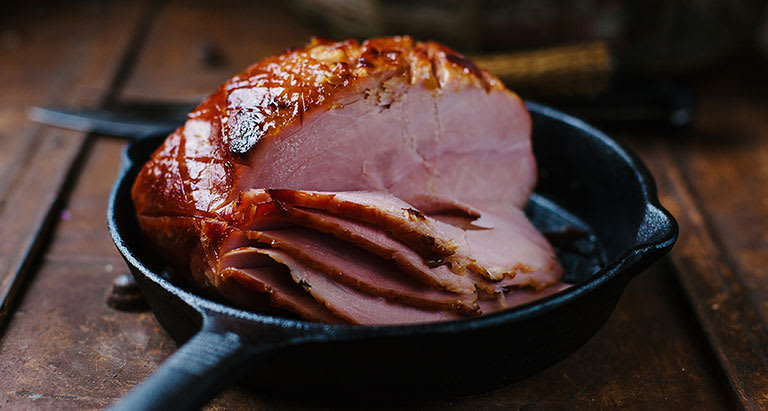 Time to Buy the Holiday Ham

Ham can be the centerpiece of a holiday, if you choose the best one. Here's how.
By Bruce Weinstein and Mark Scarbrough

Whether Christmas or Easter, ham can be an impressive (yet functional) star of the holiday table. A whole ham feeds a lot of people. And it’s easy to prepare. What’s more, ham is the lean meat from the back leg of the pig.

However, the many hammy options at the supermarket can make it daunting to buy. So, let’s break it down into two easy categories.


Simply put, a fresh ham is a large, juicy, lean pork roast. It’s not cured or smoked and is easily the most underrated ham at the market.

The easiest way to make a fresh ham is to season it with salt and ground black pepper, then roast it at 325˚F until the internal temperature is 150˚F, about 25 minutes per pound. Glaze a fresh ham near the end of its roasting with a simple mixture of 1 cup orange marmalade mixed with 1 tablespoon of low-sodium soy sauce and 1 tablespoon of Dijon mustard.


The most common smoked hams are called “city hams.” They’re both wet-cured and smoked, then sold as bone-in roasts or in various preparations like spiral sliced hams, boneless smoked ham roasts, or even ham steaks.

Although they seem large, smoked hams are most often half hams—that is, a whole ham that has been cut in two. (If you don’t have a crowd at your table, look for a quarter ham—that is, half of a half.) The two parts are the shank end and the butt end.

The shank end is the most iconic holiday ham with a central bone in the conical cut of meat. The butt end has a more complex structure, although some people find it also has more flavor, given that there are more bones in the meat. It’s also harder to carve. Almost all spiral-sliced hams are shank-end half hams.

Many spiral-sliced hams can be eaten cold. However, if you would like to heat them up (or any other smoked hams), you must get the meat to an internal temperature of 140˚F before serving. This is where an instant-read meat thermometer is essential.

We recommend heating a smoked ham covered in aluminum foil until it reaches 140˚F in a 300˚F oven, then uncover it and increase the temperature to 400˚F for 10 minutes to re-crisp the exterior or to add a glaze, if desired.

Other smoked hams are not ready-to-eat and may need to be warmed to 160˚F. Always check the label to see exactly what directions the producer suggests for preparing the smoked ham you’ve chosen.

Some smoked hams come with glazes already baked on; others have packets of glaze you add before heating them up. Opt for a smoked ham without a sugary coating. Instead, serve an unglazed smoked ham with cranberry sauce or spicy cranberry chutney on the side.

It has been said that the definition of eternity is a ham and two people. Which means that knowing what to do with the leftovers can be even more important than knowing how to serve a ham. Use the below recipes to enjoy it past the holiday table.

Ham and eggs with parm and herbs