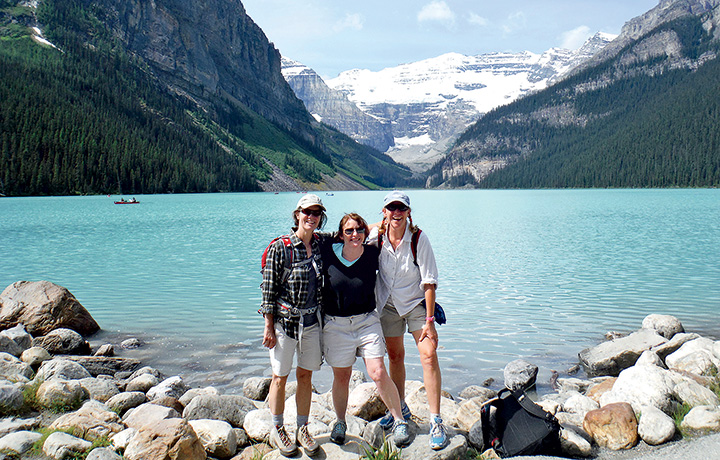 Girls Just Want to Have Fun

Kate Kelly shares the best trip she ever took and the lifelong friendship she celebrated.
By Kate Kelly

Weighed down with a borrowed backpack, I gasped for oxygen as I trudged up a trail in the Canadian Rockies with Amy and Susan, my best friends from college. It had taken us nearly two decades to get to this moment—four months of planning preceded by 16 years of fantasizing about it. Our last reunion had been back in 1999, when we’d convened in Colorado with husbands and babies in tow. This time, we’d ditched the kids and spouses and somehow resolved our logistical problems—pricey airfares, crazy flight connections, and (that bane of working moms) jam-packed schedules—to pull off a girlfriend getaway for just the three of us.

We’d enjoyed three blissful days of camping near Lake Louise, which was even more stunning in life than in the hundreds of photos I’d seen. Now we were finally embarked on what Susan, our self-designated planner, had touted as the trip’s centerpiece— a six-mile backpacking expedition through Yoho National Park. Our destination was a quiet cabin in the woods, where we’d spend the night before setting off again the next morning.

I’d given no thought to the six miles, not realizing they’d all be uphill and that we’d be navigating over rocks, logs, and streams. I had to dig deep just to put one foot in front of the other, and as I did so, I cursed myself for not springing for fancy trail shoes with better ankle support. Every step had me on the verge of collapse, even as Amy and Susan bristled with energy. (I vowed, seeing how fit they were, to begin a rigorous workout routine as soon as I got back home.) What kept me going was the fact that I was having a fabulous time.

We’d been talking nonstop since meeting up at the Calgary airport. We’d covered kids, jobs, husbands, books, and much more. Today we were reminiscing. One minute we’d be laughing hysterically at stories about the house we shared senior year, the ad hoc potlucks we hosted, the borrowed skirt Susan ruined after a night of dancing. The next, we’d round a corner and confront yet another showstopper: a glacier here, a snowfield there, a pond with impossibly bright blue water, another panorama of variegated mountain ranges.

RELATED: The Connection Between Friends and Weight

The oohs and aahs ended when rain turned into bullet-size hail. We mustered our energy for one final push to the cabin, which turned out to be a charmingly rustic oasis, with a fire blazing in a huge hearth. But my joy at reaching it was tempered by my shock at the crowd inside: 23 other backpackers. Where on earth would we all sleep? As if reading my mind, someone pointed to a ladder.

Amy and I scrambled up to a loft with 16 mats laid out one after another. (The downstairs bedroom had already been claimed by the first seven arrivals.) She and I shared a horrified look. I’d known we wouldn’t have the cabin to ourselves, but I’d imagined hostel-like rooms with bunks—not this sardine-can arrangement that would have us sleeping next to perfect strangers.

RELATED: Know Before You Go: Hiking

Our mood lifted in the kitchen, which buzzed with energy as everyone took turns using the propane stove (no electricity) and sharing the water we hauled from the nearby stream (no indoor plumbing). By the time we’d eaten and cleaned up, it was dark. Susan, ever prepared, had packed a deck of cards. I’m no fan of games, and ordinarily I would have begged off, but I had nothing to read and was in no rush to hit the mat. We recruited two sisters from Alberta to join us in playing Oh Hell by the firelight.

Oh Hell, a favorite of inveterate card-player Bill Clinton, proved to be insanely complicated, and I admit I never mastered the rules. But I’ll remember that game always. There in that cabin in the middle of nowhere, time slowed and life was reduced to essentials: warmth, laughter, lifelong friendship, and a promise never to let 16 years go by before our next adventure.