A father and son reflect on the highs (and lows) of scaling the world’s tallest peaks—and why the setbacks are as instructive as the victories.
As told to Theresa DiMasi

In 2005, Chris Sobecki, 59, managing director of the Invus Group, a private equity firm in New York City, and a member of the Board of Directors of WW International, Inc., and his son Rob Sobecki, 28, a graduate student at Harvard Business School in Boston, have been avid mountain climbers, hiked up the White Mountains of New Hampshire. It was their first mountain.

Their goal is to scale the so-called “seven summits” (the tallest peak on each continent). Recently, they sat down with WW EIC Theresa DiMasi to talk about this and the transcendent experiences father and son have shared in pursuit of climbing ever-tougher mountains. 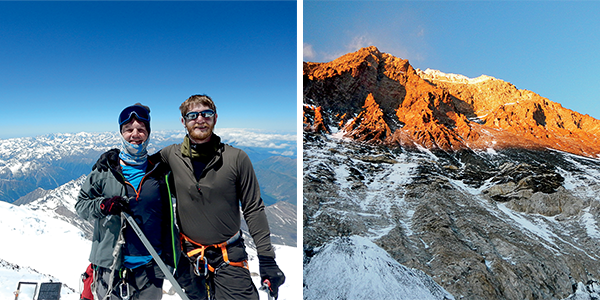 Theresa DiMasi: Mountain climbing is a daring pastime! How’d you get into it?

Chris Sobecki: It all started when Rob was a Boy Scout. None of the other dads wanted to go on the winter campouts, so I volunteered.

Rob Sobecki: We really enjoyed the challenge of those winter trips (as opposed to camping in moderate weather). So it was a natural progression to start thinking about something more adventurous. Also, reading Jon Krakauer’s book Into Thin Air made me realize that mountaineering was something amateurs could do.

CS: That’s how we ended up in New Hampshire one weekend in April 2005, when Rob was 15. We were woefully unprepared; there was still snow and ice on Mount Eisenhower, and we didn’t have the right footwear. My first climb, and I nearly slid off the mountain!

RS: At the first snow line, two people in front of us sat down and put on crampons, these inch-long steel spikes that you strap onto the bottom of your boots for grip. That’s when it dawned on us that this mountain climbing thing might be more serious than we’d thought. But we managed to slip-slide our way to the summit for a great day of hiking. When we got back to the base, we drove to the nearest camping store and bought the equipment we needed.

CS: The next day we climbed Mount Washington with our crampons and ended up summiting.

TD: So at this point it sounds like your mountain climbing was mostly an extension of your love of hiking. When did it take on a life of its own?

CS: I told Rob, before we take climbing any further, we need to learn to do it properly. So two years later, in 2007, we signed up for a six-day technical course out in the Cascades of Washington state. The instructors drilled us in camping, digging latrines, crevasse rescue—they threw us into a crevasse and we had to get ourselves out—climbing a glacier, roping ourselves together, cooking, navigating.

RS: We were a group of six big guys with two female instructors, each about 120 pounds. And they kicked our butts! But all of us summited Mount Baker, the highest peak in the North Cascades [10,778 feet]. We were caught in a storm going up, with a ton of ice everywhere. We were climbing up the Roman Wall, the crux of the climb, when suddenly, amid all this ice, we broke through the clouds. And suddenly there was no storm at all, just peace and a beautiful blue sky. The contrast between the storm below and clear, sunny sky above was so dramatic, and the sense of elation so overwhelming.

CS: I’ll never forget that moment: There we were, in the middle of this incredible blue sky with a blanket of white beneath us. All we could see were two or three peaks jutting up through clouds. I said, “This is heaven.”

RS: Yeah, we were pretty much hooked.

CS: After that, we climbed Mount Rainier, Washington state’s highest peak, and later that year we went to tallest mountain in Africa. It was around then that Rob put together a five-year plan, and we began to discuss tackling the “seven summits.” 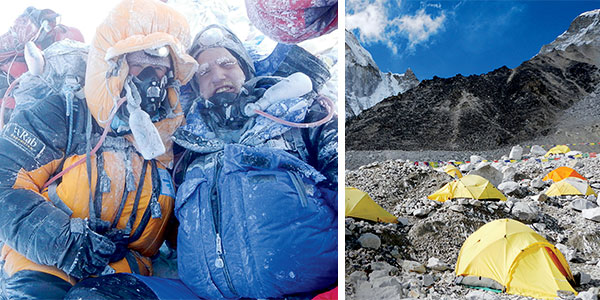 TD: The toughest is Mount Everest, in Nepal, yes? The biggest, hardest climb?

CS: Yes, bar none. We both trained for a year before that expedition. In the end, Rob summited Everest, but I didn’t. To say I was disappointed is. . .well, an understatement.

TD: What happened on Everest?

CS: On our summit day, we started from high camp, which is around 26,000 feet. But, as we were climbing, the weather turned really bad—snowing and blowing with wind chills approaching -60°. Most of the other groups turned around. I’d gotten within 1,500 feet of the summit, which is still about four or five more hours of climbing, when my corneas froze and over the course of a few hours I went blind. It was like the light started dimming and then went dark. I couldn’t see where I was putting my feet. I realized that if I didn’t turn around I was going to kill myself.

TD: Were you alone?

CS: I was with my climbing Sherpa. By then, I’d fallen behind the rest of my group. Going down that mountain blind was the hardest thing I’ve ever done, especially because I ran out of oxygen two-thirds of the way down and started to hallucinate. Basically, I just had to focus on putting one foot in front of the other. I did the last third clipped in and following the fixed lines with my hands. Even when I crossed dead bodies along the way—four people died on the mountain that night—I couldn’t allow myself to panic. In a situation like that, if you panic, you die.

RS: I had very little idea of my dad’s situation. It’s hard to explain, but it’s such a different world up there, and one of the scariest parts is the lack of communication. You can be 30 feet away from someone and almost be on a different planet. While he was going down the mountain blind, I was trying to get to the summit. We started at high camp with clear goggles on to make sure there was zero exposed skin. But after a couple hours the goggles were so iced up we couldn’t see. We kept scraping them off, but eventually had to remove them. From then on I was essentially climbing for seven hours with my mittens in front of my eyes to block the wind but to let me see where my feet were stepping. Every time we turn from the wind to protect my eyes.

TD: Was it hard to keep going?

RS: Not when we finally reached the South Summit, where I could see Everest’s ultimate summit ahead of us. It was kind of hazy, with some clouds obstructing the view, but the Hillary Step [the dauntingly steep outcropping of rock 200 feet below the summit] was right there. I knew then that I was going to make it. Be we still had about two hours of climbing to go, so it was just “take 10 steps, take 20 breaths, take 10 steps, take 20 breaths,” and then finally you make it to the summit. That was an incredible feeling. Everyone was hugging and the energy was so positive. But we couldn’t really pause high camp because it was too cold! High camp is also where I reunited with Dad and learned what had happened to him. Fortunately, his eyesight returned to normal after a couple of days.

TD: How many of the seven summits do you have left to climb?

CS: Just Mount Kosciuszko in Australia, and that’s the easiest one. We’re planning to climb it with friends and family in January 2019. But I haven’t ruled out trying Everest again. I’d probably do it without Rob, though.

TD: Has either of you ever climbed a mountain without the other?

RS: I’ve climbed without Dad. I led teams on Mount Rainier when I lived in Seattle. With him, though, it’s been really powerful from a bonding standpoint. I’ve always looked up to my dad, and when I was growing up, he was more experienced than I was in everything. With mountaineering, we’re on the same footing; we’re equals and teammates. Some days, I’m stronger and I help him; other days he helps me.

CS: I’ve only ever climbed mountains with Rob, even if it’s in a large group. For me, it’s something we do together. It’s been a very special experience.

TD: So it’s like that Casablanca line— “We’ll always have Mount Baker.” 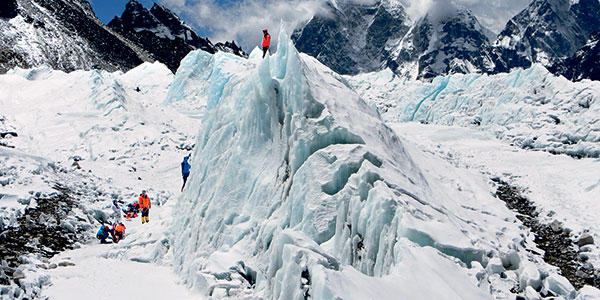 The Sobeckis' Everest team practices technical skills in the lower Khumbu Icefall, near their base camp.